HOPE floats in the time of strife

Esperanza is a play medley that has four plays, each focusing on a real life event. One focuses on the Bhopal Gas Tragedy while the other focuses on the confusion around GST. The common factor about all these plays is hope, which always emerges as a winner. Esperanza in Spanish means hope and the idea behind it, says playright and composer Gaurav Nigam is, “All of us have witnessed different stories, but what is that one driving force that keeps us going and makes us believe that the world will change for the better? Keeping this in mind, I came up with these four plays, where no matter what happens the protagonist in each play finally believes in certain hope.” The message that the play wants to send is to help people identify with various issues in society, how positively and hopefully, they can tackle issues. The last thing is about the actions they can take after watching these stories. Gaurav adds, “I want people to take away the message that we have to stick to our values and things will change for the better.” The play is unique because it has four short plays within it —Bon Voyage, Muaawza, Ghosted and +GST. The stories that this team has focused on over the years are realistic and inspired by real life and contemporary issues.

Bon Voyage
This play talks about the contemporary issues that Bengaluru is facing. Director Neha Mehta says, “This play talks about how the voice of people is unheard, infrastructure issues and a lot things that are prevalent in the society, irrespective of what we may see as outdated. It brings together people from different streams who share their concern.” Prabh Sharan plays the character of a journalist in the play. Talking about her character, she says, “As a society, we believe that there are issues but often they are not expressed. My character is on a voyage where she meets different strangers and realises that each one is self-centered. And at the end, you will find out which story makes it to her cover.” 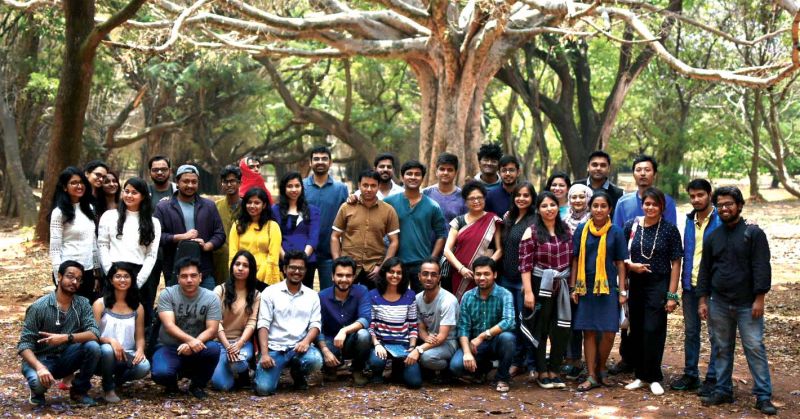 The cast and crew.

Muaazwa
Muaazwa is based on the struggles of the victims of the Bhopal Gas Tragedy. Assistant director Aleesha Agarwal elaborates, “In a way, we tend to undermine the impact or seriousness of a tragedy and more importantly, the aftermath. This play helps bring across this fact to the people to become more aware of the tragedy and the Indian political system that doesn’t make it easier for victims. Gaurav wants to tell people to not lose hope.”

Ghosted
The play is about youngsters, the virtual world and dating apps. Sanjana DM, the director explains, “This play deals with issues of identity, and how people are categorised based on this identity. This play forces the characters to look into themselves, to accept themselves, and others too.”

+GST
As the name itself suggests, the play talks about all things that are confusing about the system of GST. Ameya Moghe, who essays a professor says, “Although this concept has been around for a few months, this is the first time
it’s being portrayed in a creative way. It’s a funny satirical take on GST, and its impact, execution and confusion. There are different characters that will surprise.
I play a professor who is a self-proclaimed expert but not really an expert. “

The play will be staged on April 21 and 22 at the Rangoli Metro Art Centre.