All women, all the way

The show is a series of carefully choreographed dance performances.

The journey is about to start and Sona Nair barely has time to speak. “The performance is on the 18th,” she says in a phone call she manages to fit in before all the packing. The destination is Muscat, and the show is a series of dance performances, carefully choreographed in the past one week in Thiruvananthapuram. But that’s not what she wants to talk about. This big show titled Nareeyam 2017, lasting several hours, is entirely the work of women, Sona says. And if you remain nonchalant, she stresses on the technical part, the light and sound, all the off and on stage activities for a performance to be complete. “It’s all by women,” Sona says.

The idea was put forward by the association of Malayalis in Muscat, a programme for women empowerment, the proceeds of which would go to charity. “And it is not one of the many different associations they have, but all of them coming together,” Sona says. She and Sreelakshmy are the two celebrity faces in the group, both of them actors. Sona will be doing a solo piece depicting the love of Radha and Krishna, through a Kuchipudi-based performance.

Sreelakshmy will be performing a Mohiniyattam-based piece to the song Ankuli sparsham... from the film Kamboji. “But it would be semi-classical, few would come if it is fully classical,” Sona says.

The others performing with them are dancers from Bindu Pradeep’s school in Thiruvananth -apuram. “Bindu also did the choreography,” Sona adds. Then there are the musicians – playback singer Preetha, violinist Roopa, drummer Soumya and so on. But only the performers are from Kerala. The rest of the women – working off-stage – are from the Malayali association. And the proceeds from the show would go to charity in Kerala. “They follow the happenings in our homeland even more than us, and are quite sympathetic. They feel the pain and want to react through art.”

You cannot call it a dance drama, Sona says. It is woman-oriented but not entirely feminist. There is for instance a segment called Nari Puranam which focuses on the concept of Ardhanareeswara, someone born as man with the feelings of a woman. “We are showing the different faces or expressions of women.” Naripuranam uses songs from movies or albums that suit the theme. Then comes a section called Navarasa Bhavam, which will include incidents from different times – from the Puranas to the current including the likes of the Jisha case and the Soumya tragedy.   “The idea is women have always been exploited, neglected, be it the Panchali Vasthrakshepam or the cruel rapes and attacks today that do not spare old women or babies. But slowly, and in small ways, women have reacted. As in the Nirbhaya case, or the recent episode of the actress who was attacked in Kochi.” 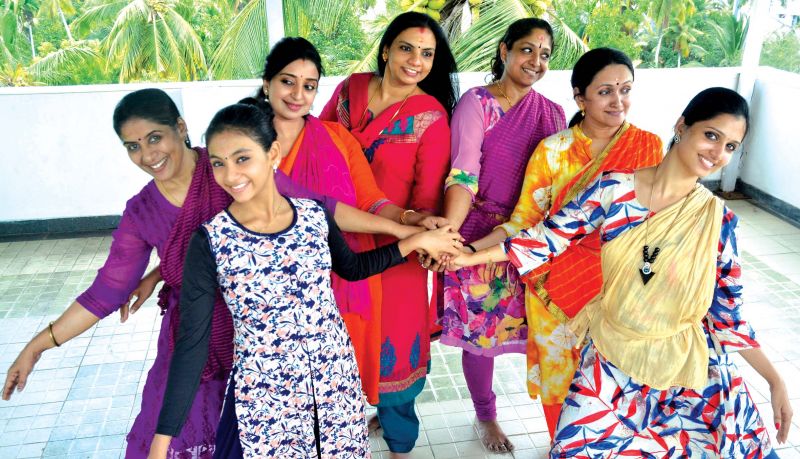 Call it a woman-oriented, but not entirely feminist kind of show.

Sona stresses this is not about equal rights, it is about understanding. The songs chosen do that, describing the women in Ravi Varma paintings, calling a mother the biggest power on earth. Thaikkudam Bridge’s Navarasa too features among the songs. As they depict the different real life characters on stage, there will be a video wall in the background with the relevant pictures – of Jisha or Soumya scrolling by.

“When we tell Soumya’s story, we form a train through dance and throw her out, with her picture in the background,” Sona says. It is only a one-time show, and the highlight of it being an all-women crew should be replicated in more places, hopefully in our Kerala too, Sona says, before rushing off to catch her plane.

A lyrical dance-drama laced with romance