A still from the play Kamla

We kill people in the name of animals, we treat people worse than animals, and only in this country, we have bazaars where people are bought and sold. We have reproduced our way into the peril of our own conscience and humanity.

Such is the story of Kamla, a play written by Vijay Tendulkar and re-enacted by Kissago. The play is about Jaisingh, played by Jay, who is a reporter known for his sensational journalism. Jaisingh discovers a human bazaar in Madhya Pradesh, and buys a slave for himself, to parade her as evidence in front of the world. This move does not go down well with his wife and father-in-law and what follows next is a sordid tale of egoism, misogyny, commercialisation and dehumanisation of journalism.

Terms like misogyny and patriarchy are often thrown around carelessly in our society and seem to have almost lost their true meaning. The reason for that is that characters like Jaisingh still exist. These men are not particularly abusive but they ooze misogyny. His wife, played by Shailaja, an achiever herself, is reduced to a bovine and domestic existence just because she is married to someone who cannot think beyond himself. 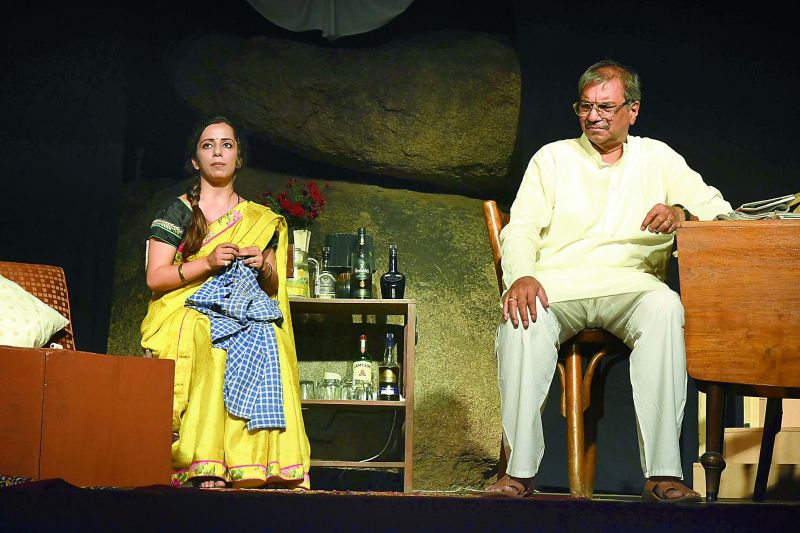 Shailaja plays one of the lead roles

The story juxtaposes the two sides of Jaisingh. On one side, he is trying to save the lives of slaves, and oxymoronically on the other hand is repressing his wife to a life of submission.

The acting of the two lead actors, Shailaja and Jay, was hard-hitting. The amount these actors have grown on stage in the past few years is inspiring. But all this became irrelevant because of the technical glitches.

There were issues with sound and the rows at the back missed huge chunks of dialogues on and off. There were certain sweet spots on stage from where the actors could be heard and then there were a few dead zones. Often, important exchanges happened in the dead zones. This killed the rhythm of the play and broke the audience’s chain of thought. Nevertheless, the play hit home with the audience despite the mutes, solely because of the writing.

Showing the two sides of a man where he is rescuing a woman and at the same time repressing another is beautifully depicted by the playwright. Even though the play is 40 years old, the social relevance is still not lost.