An anatomy of fate: two lives, one story

Actor Abhijeet Shetty in a still from the play. (Photo: Roy Sinai)

"Like the color of my skin
Or the day that I grow old
My life is made of patterns
That can scarcely be controlled"
(Patterns, Simon and Garfunkel, 1966).

Is life made of chaos or patterns too big for us to discern? Much rests on divine sleight in playwright Poile Sengupta's Alipha, as a story slowly unravels through the eyes of two people. She teaches the alphabet (alipha) to children, drawing them out in the sand with a stick in a schoolroom that doesn't even contain a blackboard. He is the son of a politician, crudely sensual, perhaps violent and thoroughly entitled. These two people have nothing in common although their lives are hopelessly intertwined. In Alipha, however, there are no teary-eyed meetings or fiery crisis points: life goes on, telling its stories, leaving us with more questions than answers.

Growing up in Delhi, Poile's 45-minute daily ride to Delhi University, is a collection of unpleasant recollections. "We all have horror stories about our experiences on buses or autos in Delhi," says Sengupta. "Things were so bad that men in cars would abduct women right off the street." Women didn't protest this, they simply took the necessary precautions. And if Sengupta mirrored a bad situation with an inkling of hope for the future, she was wrong. "The situation is much worse today," she says. "The frequency of these tragedies is far more today. It's disappointing because one always hopes things will get better." 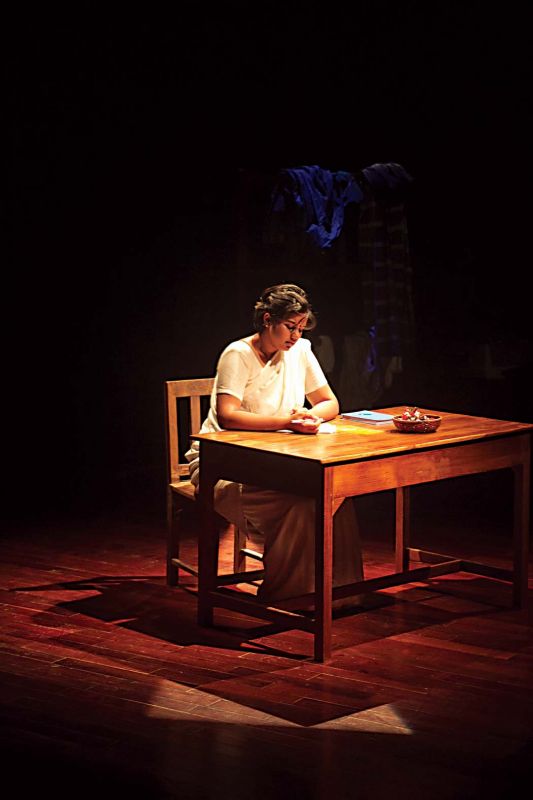 Directed by Arundhati Raja, the play comprises two monologues, delivered independently of each other. "The woman's character was a challenge because she tells the story of her life between the ages of five and 25," says Raja. Kavya Srinivasan takes on the challenge, changing in darkened corners of the stage, portraying herself with the naivety of a five year old and capturing the slow erosion of innocence that marks the human advent into adulthood. "The changes are subtle," explains Raja. "There are differences in the words she uses, for instances and litle hints in her costumes. We're giving the audiences pieces of a jigsaw puzzle, it's up to them to piece it all together."

It's a thinking play, admits Sengupta, who refers to Alipha as needing "a very alert audience." Much has been left to the imagination - even the characters remain unnamed. This is a crucial matter for Poile, who stays away from naming her characters as much as she can: "Indian names scare me a little," she chuckles. "They all have contexts and backstories that become woven into the audience's mind. If I can't find the perfect name, I don't use one at all." The protagonists become more than just drivers of the narrative - they represent archetypes that remain relevant nearly two decades after Alipha was written.
As their lives unravel, the lines begin to blur. The politician’s son is an angry, arrogant young man but his loneliness is palpable. “The female character is, well, she’s naive,” says  Sengupta. The play rises above socio-political mullings to lead the audience to a place of questioning: “I want the audience to revisit their own ideas and their own notions. How much does the past affect the present? How do our experiences as children shape our choices as adults?”