Five actors, 45 characters, a few metaphors and whole lot of raw emotions; the ingredients of Dramanon’s play Original Last Wish Baby. About to be staged tonight at the Ansari House, the play holds a very special place in the director RK Shenoy’s heart. This was the first play Dramanon ever staged in Hyderabad a decade ago.

Since RK was new to the city, he worked with total strangers to pull it off in 2007. To honour Dramanon’s decade long journey, RK is recreating not just the play, but even the emotions behind it. He is again working with a complete new cast to feel that rush he felt the first time.

The team itself is pretty young, both in age and stage time. To keep things fresh the director gave them the liberty to improvise and develop the scenes on their own. “This resulted in some very interesting ideas and even dialogues, which I retained in the play. In a way, I learnt during the rehearsals as much as I was trying to teach through my direction,” says RK. 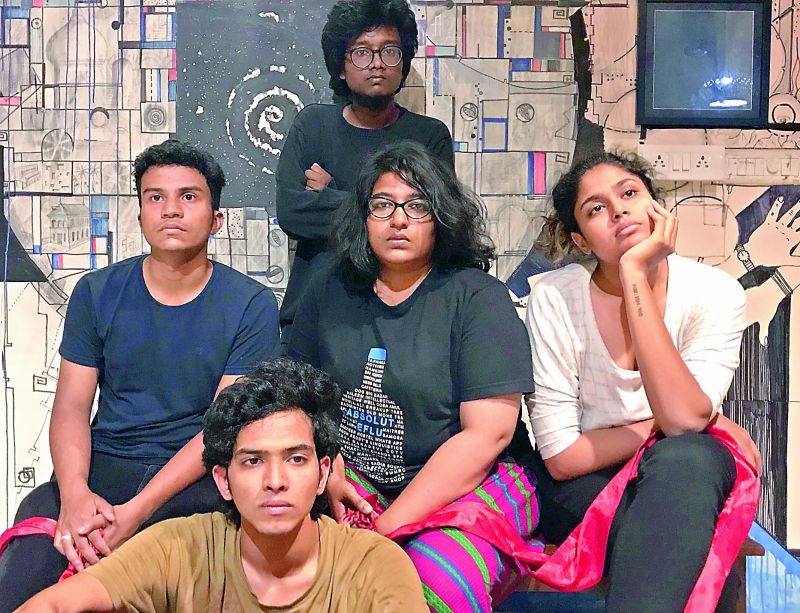 Artistes Ayaz, Gopika, Faria and Shashidhar (sitting) and Cimba during the rehearsals of the play.

The play, written by William Seebring, is layered with emotions and leaves a lot to the audience’s interpretation. “Story of a baby born without a heart, symbolic of our society in general, is the only grounded plot point. Everything else is either slapstick or intense or open ended,” according to RK. One of the reasons he feels so strongly about this play is that it sparks a debate, a healthy conversation about issues. RK feels, that the play gives everyone enough emotional room to feel differently about the same scene. “The whole point is to not form your opinions for you, unlike the media today, and let you figure out how you feel about certain things.”

RK’s fondest memory of this play is when someone came to him after a show and said, “This gives me a topic to debate about for the next week.” And that is the director’s whole goal. Not to take sides, but to ignite intelligent conversations. Well, the state in which the country is in right now, where singing of songs decide whether you are a patriot or a traitor, with no room for a middle ground, the director’s goal seems to be ambitious. There are just 70 seats for each show, marking India’s 70th independent year. So be there on time and enjoy humour, live band, interesting visuals, all wrapped up into a thought provoking performance.