Dog’s life, in its own words

DECCAN CHRONICLE. | PRIYA SREEKUMAR
Published Oct 6, 2016, 12:48 am IST
Updated Oct 6, 2016, 7:27 am IST
Autobiography of a Stray Dog, a documentary directed by Sohanlal is narrated through the monologue of a dog.

The stray dog issue has been the subject of raging debates with the general public and animal lovers at loggerheads over the killing of dogs. Opinion remains divided with a vast majority favouring the value of human life over a dog’s. That being so, director Sohanlal has come out with a documentary titled Autobiography of a Stray Dog. Interestingly, the documentary is narrated through the monologue of a dog.

The idea of the 50-minute documentary written and filmed by Sohanlal evolved during a car ride. Sohanlal explains, “Like most of the general public, my inclination was towards protecting human life than a dog’s. The turning point came when I travelled with Dr George Mathew who was working in the Psychology department of Kerala University. During the course of the long car ride, we saw some stray dogs eating waste from a plastic cover, right in the middle of the road. I was annoyed and blurted out that the strays ware a nuisance and needed to be killed. George then very patiently explained some hard facts that set me on a different course of thought. I realised that it was the humans who were dumping waste by the wayside, attracting dogs and that somewhere the root problem stemmed from humans themselves.” 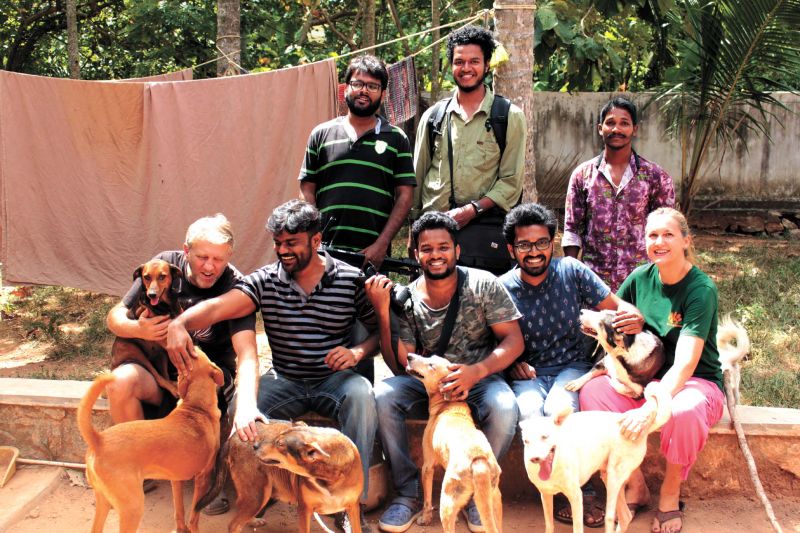 The cast and crew of the documentary Autobiography of a Stray Dog.

Thus began extensive research by Sohanlal who first wanted to publish it as a book. A friend and dog lover Baiju John then came forward to fund the documentary with some interesting aspects. Two cameras were used — one to depict what the human eye perceives and the other to capture the visuals like a dog does and with colours that a dog sees.

Another aspect is the use of candid cameras to capture several incidents depicted in the film. Sohanlal elaborates,

“We have shots of humans attacking sdogs. There is this lady called Saramma who though very poor has 50 handicapped dogs in her care. She travels by bus to see the vet with her dog and we have used candid camera to capture the emotions and reactions of bus passengers. Some passengers shouted at her and she was even dumped off the bus!”

The stray dog in the film is named Sandra and is under the care of  Street Dog Watch organisation run by UK based Mary. Steve and Mary is a part of the documentary. They have a small animal shelter as well as 100 dogs under their care in the capital city. Sohanlal speaks about selecting Sandra for the lead.

“The emotions and body language of the dog is important and when I along with the crew went to the shelter, we saw many dogs prancing about noisily but Sandra was aloof watching us. She had the look and demeanour to fit the role and we have left her loose and captured many shots.”

Sohanlal plans to come up with the book form of the documentary soon.

Pairing up after a long time…

In tune with yourself!