For the sheer love of classics

“The entire production was conceptualised in rehearsal sessions.

Presenting an all new retelling of three Panchatantra stories – The Blue Jackal, The Monkey and the Crocodile and The Crocodile and the Monkey and the Wedge, directed by Rebecca Spurgeon, is an exciting new exploration of the classic. Filled with shadow play, music, storytelling and physical theatre, this production encourages one to revisit these stories with morals that we have all grown up with.

While the original stories from the classics are very cut and dry morals, Rebecca has recreated them so kids can go back with a better understanding of them. “The idea was to recreate the stories we have all grown up reading, on stage. So through the production, I have tried to make relevant references so children can have a better understanding of right and wrong. I have tried to retell it in a diluted way to make it less preachy for children. It’s more like they will take back life lessons through this, rather than morals,” assures Rebecca, who has been teaching children for a number of years, which has helped her gain some insights on their way of thinking. “From colourful props to playful lighting and people playing the roles of animals, there are a lot of things in the play that will keep not only children, but adults also intrigued,” she adds making it all seem so simple! 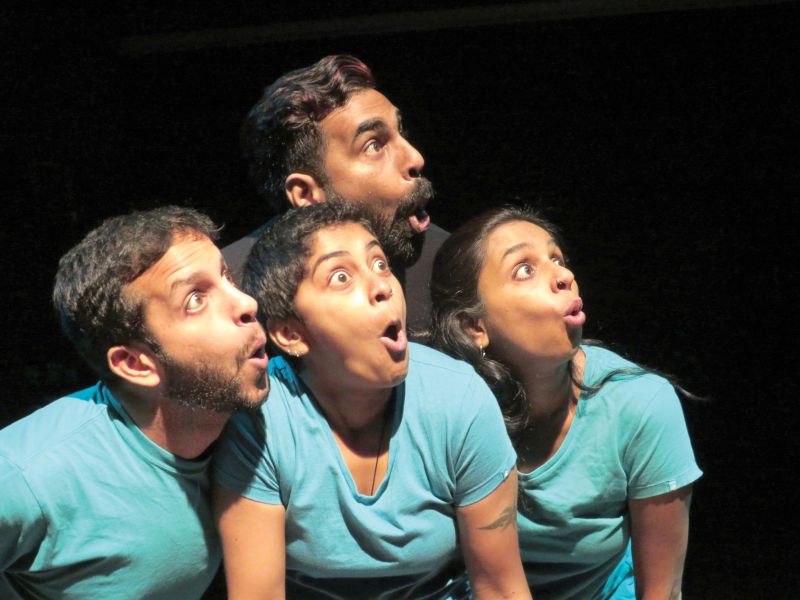 A still from the play

But it wasn’t all that simple when they started out, she explains, “The entire production was conceptualised in rehearsal sessions. There was nothing to fall back on and we all had to just trust the process. And though it is a children’s play, I decided to not let children be a part of it because that’s how exhausting it is. Only kids who are very experienced in theatre would have been able to manage such roles.”

Agreeing with Rebecca, Shlok Menon, one of the four actors explains what intrigued him about the process. “I have never had this much fun working on any production,” he proclaims before adding that it wasn’t all play and no work! “Though it was extremely hectic, I wanted to be part of it because I’ve grown up reading these stories,” he smiles. “I think everybody no matter how old they are, will be able to take back something from this. There is no time for them to stop and wonder why we are giving them so much gyaan, because it’s just that entertaining. And despite knowing these stories, there are certain twists that will have them wondering where this is all leading,” he says signing off.

The production will be staged at the Jagriti Theatre till May 14th on Sundays at 3 and 6.30 pm and from Tuesday to Saturday at 8 pm.

Pawan Kalyan to do two films at a time