Team work: The cast and crew of Kaalpnik theatre group

Two assassins, a speaking tube, a broken gas stove, and a lot of semantics. Harold Pinter’s Dumb Waiter is a concoction of multiple mundane arguments sewn together with a restaurant’s forever hungry food delivery lift.

Staged by Kaalpnik over the weekend at Lamakaan, the actors Naren and Malyaban tried to portray the thoughts of the playwright through these characters.

The play begins with two people stuck in a puny room, arguing over nothing. One clearly seems to be the boss of the other, but it doesn’t look like any one of them know what is going on around them. Gradually, it becomes clear that these two are some sort of hit men who are waiting there to finish their next job. While they lay there, they are constantly bothered by the food delivery lift which keeps popping up with various orders, since they are in a room which used to be a kitchen for the restaurant above. 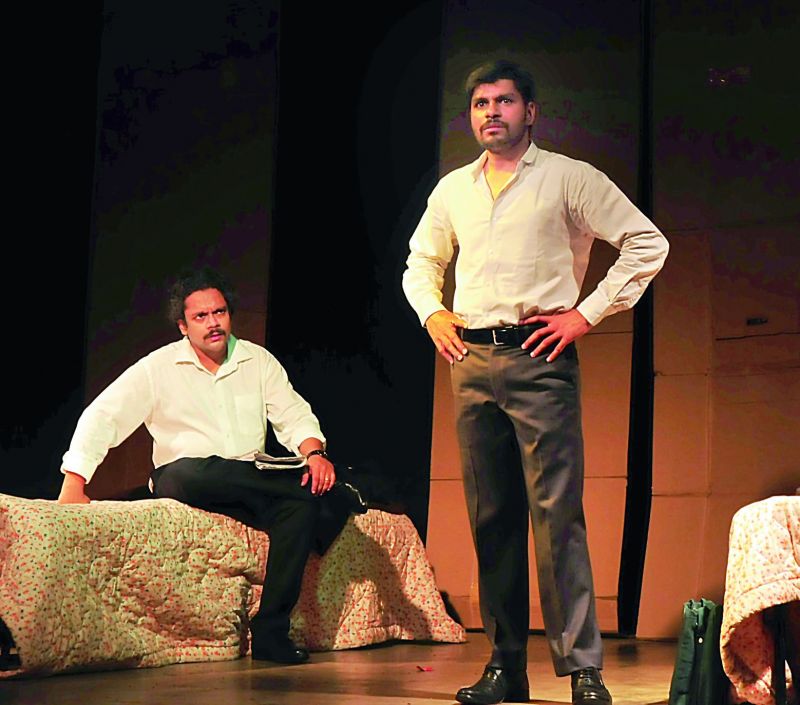 intense scenes: A still from the play Dumb Waiter

Since this is one of Pinter’s absurdist plays, a lot of it is left for the audience to interpret; hence, there can be no one definite way of saying how the play ends, and that is probably one of the reasons you need to watch it.The actors had a lot to live up to, and they did, individually.

Unfortunately, put together, they did not click. They were both operating at different levels which did not sync throughout the play. The intensity of their emotions either did not match each other or did not match the situation. But that is the thing about absurd plays. May be that is how it was supposed to be, or maybe not. The audience echoed this feeling when after the play, Chetan, an audience member said, “I could not feel that rhythm in the play, but maybe I just did not understand it.”

Nevertheless, the actors did maintain the energy level throughout the play, even though they did not get a breather, which in this heat is commendable. The crew of the play did a wonderful job, especially the tech team. There were a lot of sound and light cues and they did not miss a beat. The faint sound of a faucet leaking in a distance, the sound of the lift rolling up, everything came spot on. It will be unfair if the director was not commended here for attempting such a bold play. It never is easy to stage something which is this open-ended. Kudos to the team.