Nia Sharma's multi-layered lehenga saves her from fire; read how

Mumbai: Popular TV actor Nia Sharma has recently escaped from a shocking incident that happened at Diwali bash. The actor who is popularly known for her character Roshni Patel from Jamai Raja, met with an accident where her lehenga caught fire.

Sharing the information about the incident, Nia posted a picture of her burnt Diwali lehenga on Instagram. She wrote, “The power of a diyaaaaa! caught fire in a second. I got saved by the layers in my outfit or maybe some force that guards you and protects you." 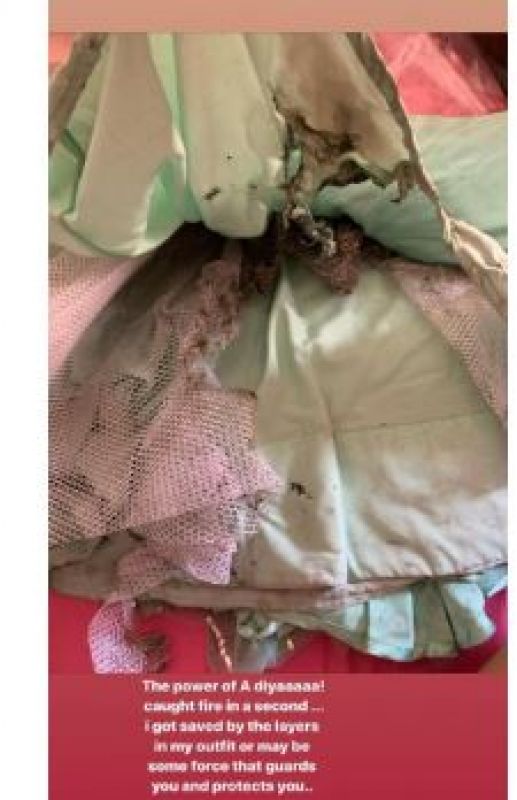 In the above picture, one can see, Nia's Diwali outfit charred up. The multi layered lehenga saved her at the nick of time.

Earlier, she had also given a glimpse of her chic festive look. The sultry actor was seen wearing a silver glittery lehenga choli with elegant makeup and traditional jewellery. She doted a nude lipstick pairing up with silver smoky eyes look. In one of the photos, she is seen taking a selfie. The back cover of her phone has a portrait of herself. Her ring also does not stop to take attention. It is big, bold and ethnic.

Though the tragic incident happened, it did not stop Nia from enjoying the festival. She was seen grooving with popular Punjabi singer Guru Randhawa.

He has given chartbuster hits like ‘High Rated Gabru’, ‘Morni Banke’ and ‘Suit Suit’ to name a few. A video posted by fans on social media showed Nia dancing on ‘Suit Suit Karda’ with the Punjabi singer. The Diwali party was attended by Mika Singh, Kanika Kapoor, Aditi Sharma, and Kapil Sharma.

On the work front, Nia will be next seen in the fourth part of Ekta Kapoor's Naagin 4.

Faisal Khan was cheating on me during Nach Baliye: Muskaan Kataria

Bigg Boss 13 Day 2: Paras Chhabra is the biggest heartbreaker of the house