Janhvi Mittal aka Shrenu Parikh did aarti at the 1000 years old heritage Saas - Bahu temple which marked as a unique promotional activity in television recent times. 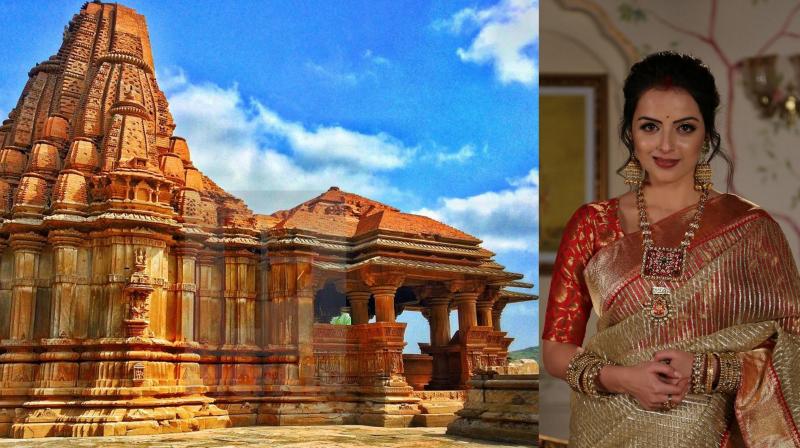 The makers of upcoming show 'Ek Bhram- Sarvagun Sampanna' will be flying down to the 1000-year-old heritage Saas-Bahu temple in Udaipur.

The actress is all set to break the stereotypes and present a Bahu which is not the typical docile, obedient and loving daughter in law. Janhvi Mittal is coming to change the mould of the conventional Bahu on screen and showcase the deadliest avatar of a villainous daughter in law.

The makers have gone to a great extent to keep the script under wraps, leaving even the cast in the dark about the entire plot.

Mounting the script on an unconventional concept of an anti-heroine protagonist, Ek Bhram- Sarvagun Sampanna presents Janhvi Mittal as the pretentious ideal Bahu, while she secretly plots against her family members. With an unpredictable narrative as such, the script of the show is strictly kept secretive and even the cast is unaware of the entire story. All the actors have got their character arc and role but not one actor has access to the whole script.

The promos of the show have piqued the interest of the viewers by giving an insight into the villainous arc of the lead actress. Building curiosity amongst the masses, the promos have left everyone wondering about the intentions of Janhvi.

Immersing herself into the character entirely, Shrenu Parikh has officially transformed into Jahnvi Mittal and is ready to meet the audience on Star Plus from 22nd April 2019.

Airing every Monday to Friday at 7 pm, Ek Bhram- Sarvagun Sampanna is a revolutionary story in the history of Indian Saas-Bahu serials.

Bigg Boss 13: Paras' GF Akanksha is reason behind his grudge with Sidharth Shukla?