Bengaluru: Kannada actor Duniya Vijay, who has time and again been in the news for reasons ranging from marital disputes to accidental death of two actors during the shooting of a film, has landed in another controversy.

In video footage that went viral, the actor was seen using a sword to cut the cake for his 46th birthday. The actor is directing a movie titled Salaga starring himself in the lead role along with Dhananjay and others. 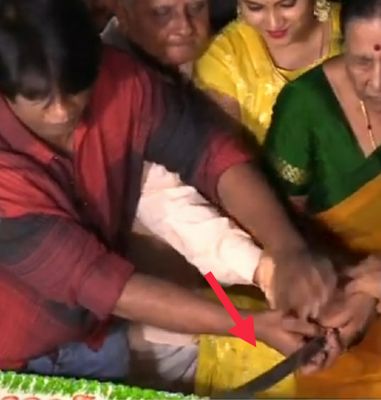 After the video of the actor cutting a cake with a sword went viral, it is learnt that a top Bengaluru police official has instructed the police to issue a notice to the actor seeking an explanation why action should not be initiated against him for violating the law.

The sword is said to have been gifted to Duniya Vijay at the birthday celebration.

Following a notice issued by the police, Duniya Vijay apologised for his act saying that it was a blunder which he committed unknowingly after someone passed it to him from the huge crowd of fans who were there to greet him on his birthday.

The movie Salaga is said to revolve around the underworld.