A U-Turn & a totally Kirik Party!

Women power rocked at the recent South Indian Film Awards held in Hyderabad on Saturday night. Actress Shraddha Srinath won the best actor — female for her role in the debut film, U-Turn while Samyuktha Hegde took away the best supporting actress award for her role in Kirik Party. Sruthi Hariharan and Rakshit Shetty won the Critic’s Award as well. The U-Turn actress is thrilled at the award. Shraddha felt, “It couldn’t have been any better than U-Turn as my debut movie. It’s been very rewarding and an amazing ‘turn’ in the initial stages of my film career. The best actress award for my debut movie has boosted my confidence. Now, I feel I can pull off anything. I am glad that I happened to be a part of the U-Turn, which eventually became the greatest turning point in my life.”

About the increase in the number of qualitative films being made in the Kannada film industry, the actress feels that the recent trend in the quality of films like U-Turn makes her feel that the golden era of Kannada films is back. “I feel like we are back in the golden era. There are many films being made which are content-driven and most importantly even the producers are backing such films.”

She also shared that working with Pawan Kumar was a great learning experience and she would not regret anything as the experience was full of learning the basics with lots of pure work resulting in overall success. 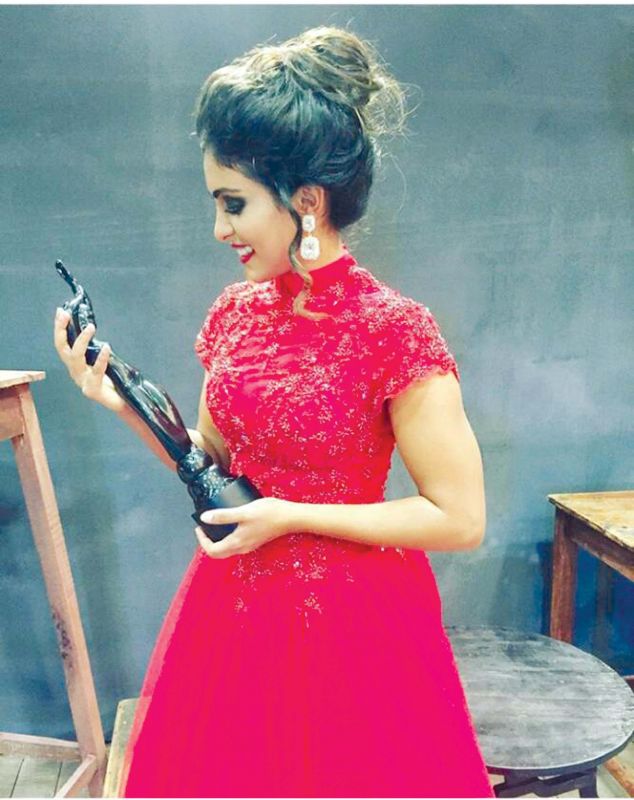 The Kirik Party team is also celebrating, as Rakshit Shetty won the Critic’s Award and a sprightly actress stole thousands of hearts as the bubbly Arya in Kirik Party, bagging one of the most coveted film awards for her very first movie. Actress Samyuktha Hegde, who won the award for best supporting actress is euphoric, and understandably so. “I wasn’t expecting it all, because there were so many senior actresses nominated in the category. I was happy with the nomination, but getting the award is something else. I’m overwhelmed,” expresses the ecstatic teen, who was dressed in an exquisite red outfit designed by Riya Kodali.

When her name was called out, Samyuktha went blank onstage. “I held the award (it was heavy!) and said, ‘I don’t know what to say, please give me a minute’ and then started speaking. I was so caught up with looking at the award that I forgot everything else,” shares the actress.

The danseuse’s date for the event was her brother Deepak. “He was better dressed than I was! He spent so much on his new tuxedo,” smiles Samyuktha. As for her co-star in Kirik Party Rakshit Shetty, who too bagged an award, he was super happy for the actress, who he affectionately calls ‘kiddo’. “When I signed the film, I looked at Rakshit and said, I will win this award this year! I wasn’t over-confident, it was just a dream. Rakshit looked at me and said ‘You finally did it!’” says the artiste.

Age, she feels is not a factor, and she hopes to, “Stay humble, keep working hard and delivering good performances.” Having been a target of online trolls she adds, “There was a point when I used to feel bad, but I realised trolls are everywhere. If you’ve chosen a career in the limelight, everything that you do will be made a meme out of, so I don’t feel bad. If I see any nice meme, I go and comment on it!”