The name Ballimaaraan instantly transports you to the rickety by lane of old Delhi, where the famous Urdu and Persian poet, Mirza Ghalib resided. However, the essence of Ghalib’s erstwhile gully is now being taken to every corner of the globe through Piyush Mishra’s band, Ballimaaraan. The musician says he remembers Ghalib for inspiration every time he writes a song, “I want to sense him in my work and have his fragrance around me, I am inspired by Ghalib and so the name of my band is Ballimaaraan,” says Piyush.

From aarambh hai prachand to Ik bagal mein chand hoga, Piyush’s renditions tug at the heartstrings with its strong lyrics, melodious tunes and his soul-piercing voice. The group of four musicians include, Piyush Mishra as the lead singer, Nishant Agarwal as the guitarist; Lubhanu Priy as the pianist and percussionist Jayant Patnaik who juggles between the tabla, dholak, jembe, darbuka, cajon and other percussion instruments.

The inception of the band has an interesting story attached to it and the singer graciously accepts that the idea to start a band was actually spurred by the band’s guitarist Nishant Agrawal. The duo met at a literature festival in Chandigarh and have come a long way since. But Nishant says he will always remain a Piyush Mishra fan, “He is a kind man and I am a big fan of Piyush Mishra,” he smiles. The duo got talking when Piyush had self-doubts about his singing talents, “I told him that it doesn’t matter because people love you as you are and that’s when we got talking about the band,” says Nishant. 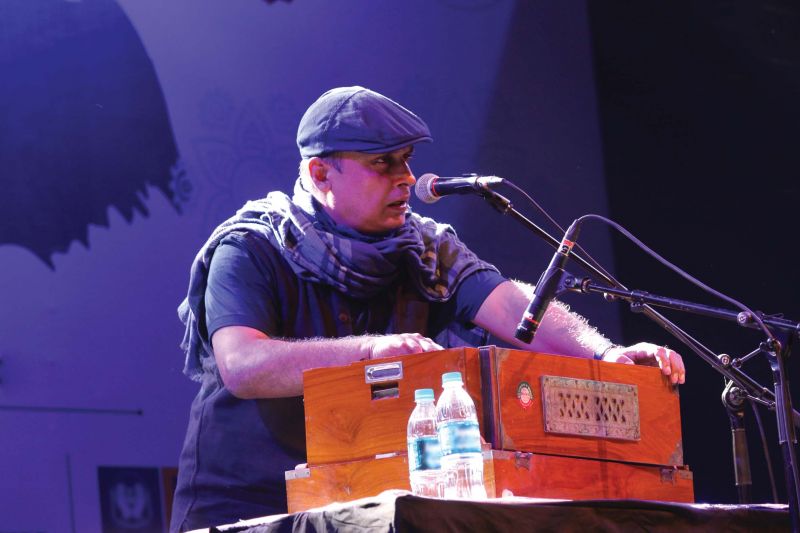 Started three years ago, most of the band’s tracks include socio-political and women-centric themes, which have a theatrical flavour. Piyush believes this is precisely the USP of the band as it connects with the younger generation.

Donning the many hats of an actor, lyricist and singer, Piyush attributes everything to his theatre background, including his band’s lyrical values and discipline. “Words are very important, decoding and explaining our lyrics is everything in our performance,” he says.

All that matters to the band is to communicate with the audience, besides proper emphasis on words, stressed between songs and the right intonation, “It’s like dialogues of a play, the communication is more important than being in rhythm,” explains Piyush.

The 55-year old theatre exponent is a stickler for perfection and won’t tolerate leniency during work. Ask if his young band mates are at par with his approach and he says, “initially they were very lenient but now they are synching well with the band, discipline is very important.”

The band is certainly getting the acceptance and recognition it deserves now more than ever, and the actor is aware of his ever-growing fan base across the country. “Audience likes me, and I have a connect with them. This has been established quicker than I thought it would,” he reveals.

By the end of this year, Ballimaaraan will come out with another album that is still untitled and Piyush assures it is packed with originality, “There will be a flood of new songs, and I am exploring songs that I have written back in my theatre days and trying to revive them. I assure you these are the songs that have never been heard before” he concludes.