DECCAN CHRONICLE. | CRIS
Published May 26, 2018, 12:00 am IST
Updated May 26, 2018, 12:18 am IST
Lucineh Hovanissian, who has composed music for Sanal Kumar Sasidharan's Unmadiyude Maranam, uses her medical background to combine art with science

It began on the 9th of January, birthday of Soviet filmmaker from Armenia, Sergei Parajanov. Lucineh Hovanissian on that day began work on the music of a film called Unmadiyude Maranam – Death of Unmadi, made by award-winning filmmaker Sanal Kumar Sasidharan. Composing from Armenia for a movie from India. But everything, she says, seemed to be very much connected. The very first reading of the film had touched her. She knew Sanal from the days of his S Durga, a film that had run into a lot of controversies last year. The whole process turned out to be very exciting for the musician, who has also finished her degree in medicine and worked as a doctor, then a radio and TV journalist and at some point, a translator. But then music was always in the centre of her interests, she says.

“It was a part of my life since I was five. My first ‘concert’ was for a full auditorium in a bus,” she smiles. “It was on the way back to the capital Yerevan from a regional summer kid camp in Soviet-era Armenia.  At nine, I was a soloist singer in Municipal Park children’s band. At 11, I won awards at Aram Khachaturian young composers' competition, but ultimately entered State Medical University in Yerevan, got my MD degree 'cum laude' and later specialised in Pierre and Marie Curie University in France.” She later took lessons in classical singing and composition at Yerevan State Conservatory and released three albums (two of them in France). She was visiting artist of New York's Symphony Space, Cité des Arts Internationale (Paris) and Cleveland foundation; and has toured in France, Italy, Germany, Spain, Finland, Serbia, UK, Switzerland, Sweden, and Canada. "Not yet in India,” she adds.

Her acquaintance with Sanal began at the time  S Durga won the Golden Apricot award at the Yerevan International Film Festival. She was freelance translator for GAIFF (Golden Apricot International Film Festival) and the festival's magazine. “We started to communicate about the magazine and the Armenian cinema (notably, Sergei Parajanov's work), and he knew that I am also a musician. A few months later I received Sanal's letter suggesting that I work on the music for Unmadiyude Maranam (seemingly, he was not happy with previous musical ideas and was under the strong influence of the Geghard rock-carved monastery, where some parts of the film were shot).” 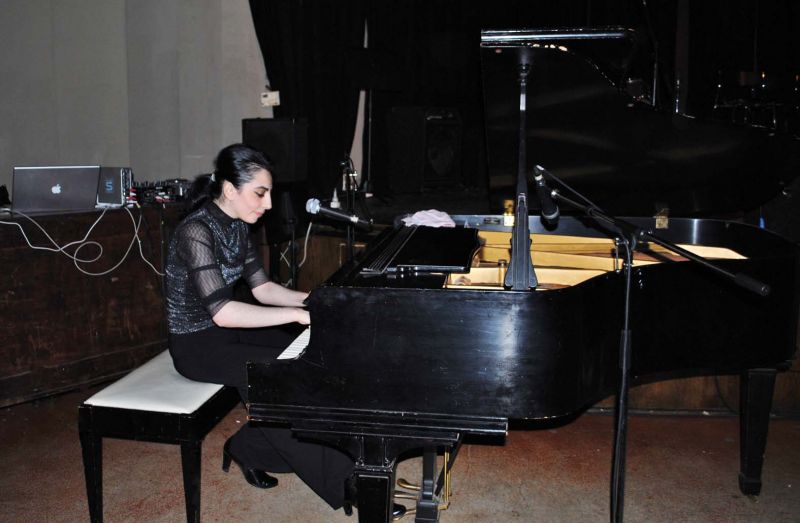 Sanal described the film as a monologue driven fantasy using a lot of real footage and video clippings. Lucineh saw the new film's working version on vimeo, and 'immediately felt attached'. “Its messages were very close to me and ideas came easily. Since I live in Armenia and Sanal and his team are in India, we developed a very active communication through vimeo, we transfer, fb and skype; a lot of audiovisual files and musical material were transferred and exchanged. For each scene many soundtrack variants were made: it was a kind of 'post-production music illustration', since the film was actually in its final stage when I became part of the crew. After many attempts, variations and two studio sessions we got the final soundtrack of Unmadi."

The soundtrack is based on improvised Armenian spiritual and traditional music. “This inclusive  and improvisational style is very close to me in my music work  So, perhaps this similarity of approaches made it much easier. Sanal once mentioned about an Armenian sacred song from 10th century. He said, 'If no words, I would think it's a song from Northern India!." During the process, there were a lot of coincidences happening, that boosted the creative approach, Lucineh says. “There were two dreamlike, almost psychedelic scenes with Unmadi (the protagonist) with the use of computer graphics, and for many days neither I, nor Sanal was happy with the music. I knew that some parts of the film were shot near mystic Himalayas, some others in Armenia.  I just thought,  why not superpose Tibetan singing bowls over an Armenian ancient spiritual chant which I sang and recorded in the very same place where Sanal made his shootings (by sheer coincidence!). That place is Armenia's 12th century rocky monastery of Geghard - a UNESCO heritage site. I asked him to send me all the sound material made for the film with these bowls, since it was already used in the its soundtrack.

I made a mix with two different pitches of bowls and surprisingly found out the same 'E flat' from the song! It was fun and mysterious at the same time, since the singing voice and Geghard's rock-carved sepulcher's unique acoustics were very much in harmony with the bowls' ringing, vibrating sound. The next day I sent it to Sanal. 'It works! It's really impressive!' he said, and so the most difficult scene was done." Lucineh's medical  background helps her in her music making too. That and her penchant for research makes her combine art with science. “I did work on such kind of projects: 'Noosphere: sacred mysteries' in 2009 and 'Quantum Waltz' in 2015. There's another, yet ongoing project that I recently sketched: 'Time syncopation' – a mixed audiovisual fantasy with poetry elements."