Marching to their own beat

Gender equality may have become a reality in many spheres and professions, but women percussionists in India are still struggling to earn their spotlight in spite of their stage presence and immense talent.

Recently, the fourth edition of the Women of Rhythm concert series was held at CCRT open auditorium to celebrate the best of female percussionists by honouring their spirit and challenges.

The event was divided into three segments where artistes were strategically lined up with each other. The first segment consisted of young contemporary percussion artistes who started off with rhythmic beats of drums, tabla, flute and keyboard. The second segment was dedicated solely to Carnatic music, where the legends performed with sheer expertise and aura in mridangam, violin and kanjira, while the third and last segment had a unique touch to it — a perfect amalgamation of music and dance — handpan, ghatam and vocals along with flamenco dance. With its mix of classical, fusion and contemporary music, it was a real treat for all the music lovers who had gathered.

A mridangam pioneer
It was her love for the mridangam as a child which propelled Dandamudi Sumathi Ramamohan Rao to storm into the male bastion and become the first female mridangam player 25 years ago. Her continuing passion for the art was evident as she played the mridangam with dedication and style at the concert. 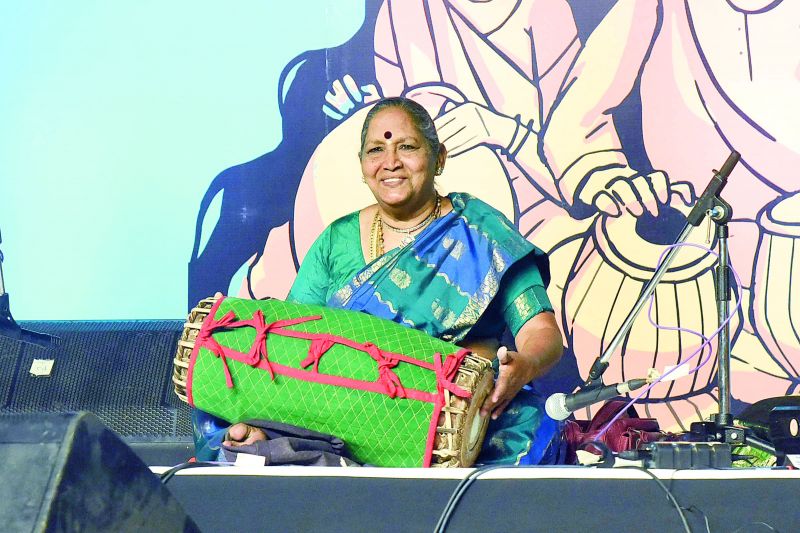 Sumathi says she was lucky enough to start her journey when gender biases were not in vogue. “My father was a mridangam player and he taught me when I was eight years old. At that time, we never thought whether this profession would work for women or not. He simply passed on the legacy to me since he was an expert,” says the 70-year-old artist, and adds, “I get invitations to all sorts of concerts and it is not limited to only all-women ones. When I was in my early 20’s, several people used to come only to watch my performance. Even today, so many people are inspired by me and have started to push their daughters to learn mridangam. I feel really happy about it.”

Interestingly, Sumathi is the only Indian woman to receive the Sangeet Natak Akademi award for mridangam. Elaborating on the current scenario for female artistes, she says, “Back then, there were no opportunities but today, the doors are open and there are several platforms including channels, concerts, independent bands, etc., so the future is very bright for all those who are talented.”

Mastering the ghatam
One of the frontline musicians of India and the first woman ghatam artist of the country, Sukkanya Ramgopal’s affection towards rhythm began in childhood. “When I was a kid, I used to drum on the table and chair and love the music coming out of it. Seeing that, my parents enrolled me to learn mridangam from where I moved on to the ghatam,” narrates Sukkanya. 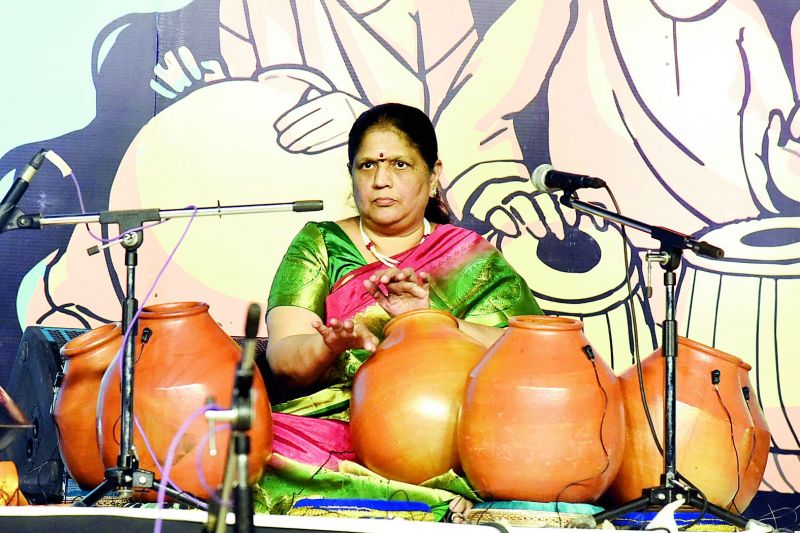 Over the past 40 years, she has mastered the art of playing the ghatam in Carnatic music and is the recipient of the prestigious Sangeet Natak Akademi Puraskar for the year 2014. Sukkanya says that people are still surprised at the way she plays the instrument as it involves a lot of hard work and pain.

“Playing ghatam is no doubt painful as the artiste is playing with bare hands on a mud pot. Even after playing ghatam for decades now, I have seen prejudice against women performers till date. Most people feel that the instrument is tough for a woman to play, but things are slowly changing now,” she says.

Greater inclusivity needed
After travelling extensively across the country and working closely with artists and artist communities for years now, Sumana Chandrashekar, ghatam and handpan player feels that the society needs to consciously balance both men and women percussionists. 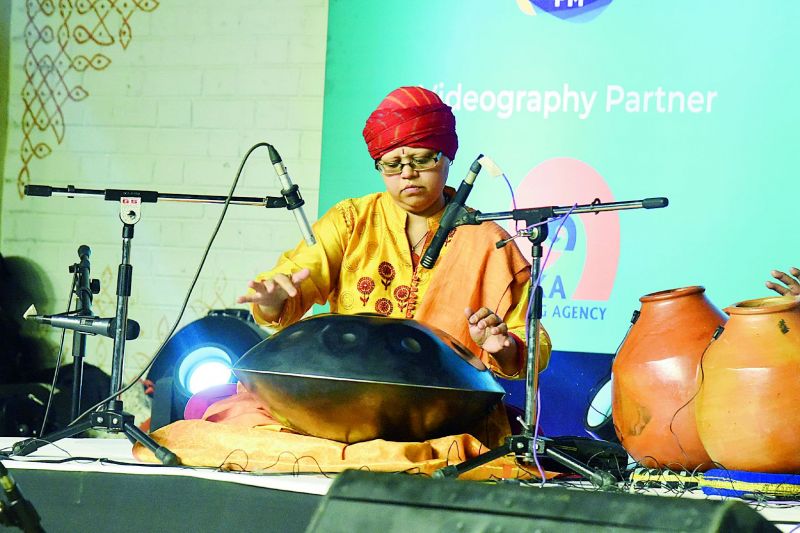 “I started off as a Carnatic vocalist as a child but was drawn towards the ghatam as the years passed. More recently, I have been exploring the possibilities of the wooden spoons and the handpan in the idiom of classical music,” she says.
According to her, many more women should get the opportunity to perform.

“Even now, we women artistes get called more for women centric concerts. It’s just the mindset of the people, no one really consciously decides on the gender of the performer, particularly in the field of percussion,” says Sumana, adding, “The first names that crop up are usually of men due to the preset notions. It’s not that they are deliberately not inviting women performers. Yes, the number of performances has increased over the years, but including more women percussionists in any concert is the need of the hour.”

Defying all odds
For Daksha Boricha, learning drums meant going against her family. “When I first expressed interest in learning to play the drums, my parents were against it. Even a few of my relatives made fun of me and my decision as they thought playing drums is not a proper career choice after college. But now when they see me perform on stage, their eyes are filled with pride,” says Daksha, who has been a part of old Bollywood/orchestra bands as well as numerous female bands. 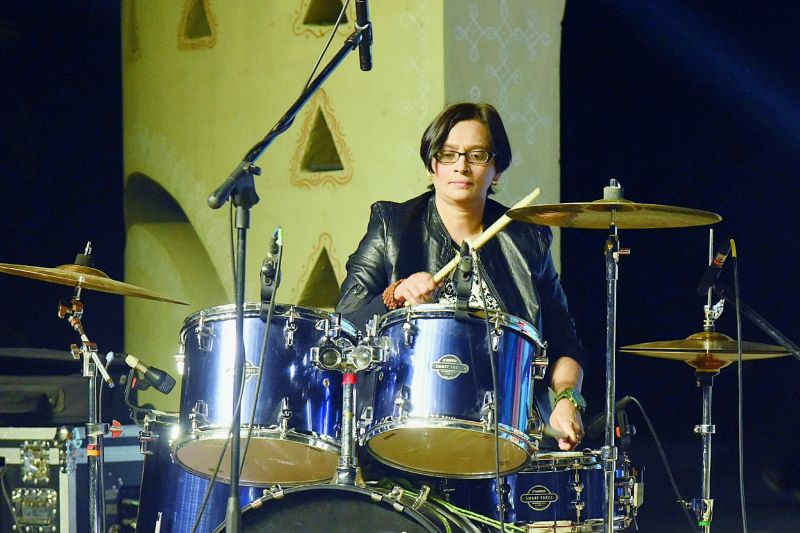 Daksha says she constantly tries to master the instrument by participating in classical collaborations and experimenting with different genres. “We can actually count the number of female drummers in India, which should not be the case. Learning any musical instrument shouldn’t be looked down upon; instead it should be encouraged and taught to everyone. Though there is a steady increase in the number of women percussion artistes nowadays, there is still a lot to do with and for them,” she shares.

Focus on music, not gender
Born in a musically inclined family, Mitali Vinchurkar received her first lesson of rhythm on tabla from her father, renowned artist Vilas Khargonkar. She is not only a solo female tabla artist; she performs every genre of music like Indian classical music, fusion music, ghazals and Bollywood music as well. 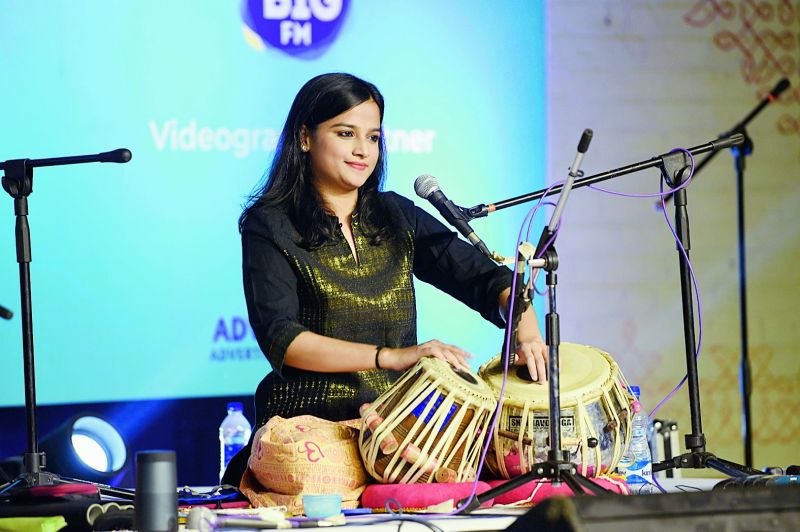 Marching to their own beat

“Both my father and grandfather were renowned tabla players, so I did not see any prejudice against me as a female tabla player. For me, it was an obvious choice to follow in their footsteps,” says Mitali, who adds, “Unlike others, I haven’t faced any discrimination but yes, my biggest challenge is to stay true to the expectations due to my family legacy. While I do get compared to my father, gender should not matter at all in music. One should only concentrate on the music and not the gender of the performer.”