And the city played hard!

The Indian tour finally kicked off with Hyderabadi boy DJ Shashank playing a set, followed by Indian EDM artiste Anish Sood warming up the crowd with his remixes.

“I’m so happy I finally get to play!” The joy and relief in David Guetta’s words were reflected on the faces of the audience as he took to the stage at the Hitex exhibition centre in Hyderabad on Saturday night.

After one cancelled show in Bengaluru and another one postponed at the last minute — both reportedly because of improper permissions taken — the Hyderabad edition of Sunburn Arena was never in doubt about its execution. The Cyberabad Police tweeted on Friday night, “Welcome to #Hyderabad @davidguetta. Look forward to hosting you tomorrow. @cyberabadpolice committed to ensure a glitch free event as always (sic).”

On Saturday, concert goers had a blast, as did the performers themselves. The Indian tour finally kicked off with Hyderabadi boy DJ Shashank playing a set, followed by Indian EDM artiste Anish Sood warming up the crowd with his remixes. 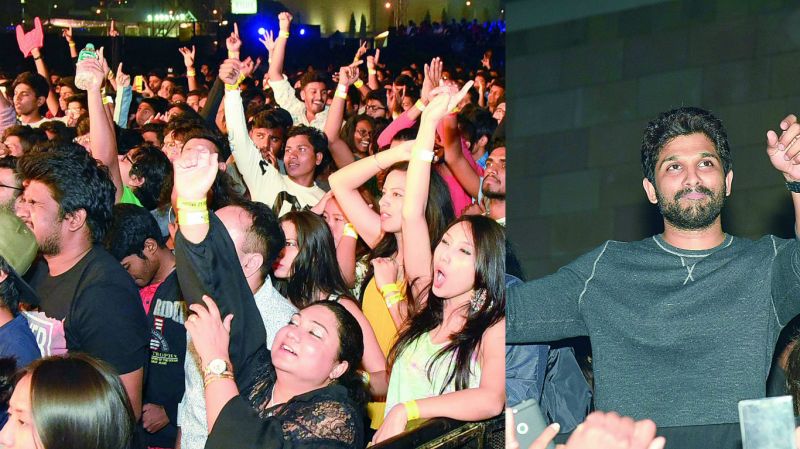 The crowd was seen having a great night. (Right) Allu Arjun

When Guetta finally came on for his two-hour set, even the few people standing at the back began to run towards the stage. Getting the crowd to sing along to some of his tunes such as Shot Me Down and Hey Mama, David and the audience had the time of their lives — and even his mispronunciation of “Hyderabad” couldn’t dampen their mood.

Mamatha Mallipudi, Food and lifestyle blogger
I’ve been to a lot of concerts but this was one of the best I’ve ever seen. The visuals, the lights, and the stage were all really good. He played one of my favourites, Titanium. It was actually a little sad when he said that he was glad to finally play, as his concert in Bengaluru and Mumbai got cancelled. At the end, he stood up on stage and talked to the crowd — there was a guy taking off his shirt and Guetta said, “I see you!”

Rajesh Challa, IT consultant
It was crazy! The entire concert, from the crowd, the music, the design of the stage and the arena... it was all awesome. About David Guetta’s performance, if I could rate it from a scale of 1 to 10, I’d give it a 100. The moment he started playing his older numbers such as World Is Mine and I Gotta Feeling, it was great.

Sandeep Sinha, Event organiser
The whole event was just fantastic. The concert was great and the crowd was very good. The police, too, did a great job managing the traffic. Guetta’s performance was amazing, he’s one of the best. I had the best time with my friends here.