The video of DJ Snake’s blockbuster song Magenta Riddim dropped on Thursday, and fans are simply blown away — especially the ones in Hyderabad!  What many may not know is that the DJ, one of the top international DJs at the moment, chose this very city to shoot the visuals for the chart-topping track. A source says that the French music producer was in the city in the second week of March, staying at the Falaknuma Palace and shooting in Ramoji Film City, and that the shoot went on for about two weeks. The video, pays tribute to the massive influence Indian music has had on DJ Snake’s musical history. Apparently, DJ Snake was keen to imbibe the vibe of the city into the song.

Directed by Gal Muggia and Vania Heymann (the duo behind Coldplay’s Grammy Award-nominated video for Up & Up), the video follows a squad of firefighters who can’t stop dancing. Interestingly, most of the talent and crew are local artists who’ve worked in Tollywood. Celebrity stylist Neerja Kona, who has styled many Tollywood stars, styled Snake and the cast for this video. The secrecy behind his entry and exit has however, left everyone shocked. Says Neerja, “He didn’t want anybody talking about it before it came out, and wanted it to be an absolute surprise. We had to sign a non-disclosure agreement before getting on board so we couldn’t mention the project at all!” 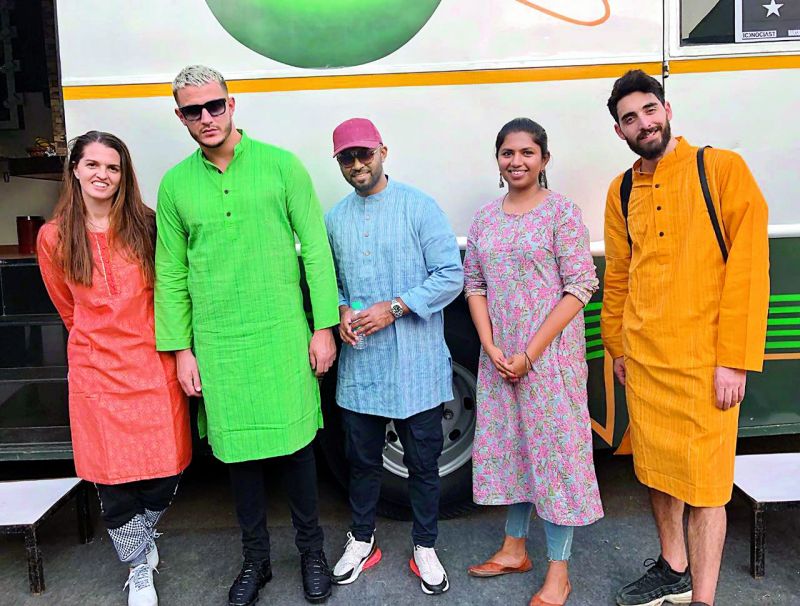 Julie (his manager), DJ Snake, Shammi (his best friend), Neerja Kona and a crew member while shooting in the city.

She adds, “He was looking to work with someone local and somebody suggested my name to him. I have always been a fan of his, but it wasn’t until I got the official email that I believed that this was happening for real!” Describing the making of the music video, Neerja says, “For the firemen costumes, we got references from Mumbai’s firemen, but Snake’s costume had a French touch. Fireman badges were procured from France, and sewn onto his costume. We shot for three days without him and he finally joined us on the last day. He is currently on a world tour, so his schedule was really packed.”

On working with the DJ and about why he chose Hyderabad, Neerja shares, “He doesn’t have any airs about him. In fact, he was very friendly and chilled out. He explained that he chose Hyderabad because he loves to perform in India, and enjoys the food and culture too. But since other artistes like Coldplay and Beyonce have already explored the popular side of India, he wanted to do something different. He was also very specific about the actors not looking like performers but like normal Hyderabadi citizens that you would see on our streets. The depiction of Hyderabad in the video is very real.” While most Indians rue about how foreign artistes portray India in a very stereotypical way, DJ Snake seems all set to challenge that status quo!