There’s something awesome about December Season

Nowhere in the world is there a tradition of more than a month long festival devoted to the classical arts, encompassing several venues, with around 3,500 concerts. The lives of all Carnatic musicians, young or old revolve around the “December season” as it is called; they don’t accept concerts anywhere else, time stands still, visitors and music festival organisers arrive in hordes from all over the world; accommodation of any kind is hard to find during this time in Chennai.

The origins of the tradition are religious - the month of Marghazi is considered sacred to the Gods, and is a time for prayer as well as rejoicing. Lord Krishna himself says in the 10th chapter of the Bhagavad Gita “of months I am Margashirsha”. In the words of Jayanthi Kumaresh, 6th generation veena exponent “this is the time Tamilians celebrate Goddess Andal’s month. One gets up at 4 am, one makes “pongal”, offers it to the Lord, it’s a festive time. December is an auspicious month. If you walk the streets of Mylapore, near the Kapaleeshwar temple, in the early morning you see groups of people singing in prayer.”

Apparently, artistes across the board support the tradition whole heartedly, even senior, audience pulling stars accepting lesser fees during the December season. One of the most popular and celebrated singers today, Sudha Raghunathan explained “The music season in Chennai is the largest in the world; one has to support it. 3-3500 artists are showcased during these days; this could only happen with all levels of artistes supporting it. Each Sabha has 3 artistes a day, (1-3 pm, 3-6pm, and 6-9 pm) going on for 10-15 days; look at the costs involved in that!”

Abhishek Raghuram, a 7th generation young singer regarded as amongst the best in his generation differed “I don’t think money wise or fees wise I have had to compromise. I feel the economics of the season have improved by leaps and bounds.”

A common criticism about the concerts is that they are all extremely similar, with innovations in content or format being frowned upon. On being questioned about the type of presentation, Sudha Raghunathan admitted most of thepresentations were very traditional and one was expected to stick to this; usually during December 1-10 thematic related concerts were presented she said.

Jayanthi  Kumaresh  said “ I would say there are three different types of audiences - the first lot from December 1-10, then another group, and then the New Year listeners.” Another important aspect is the platform the season provides. Jayanthi shared “Throughout the year one performs all over the world in different cities; during December, all those organisers and fans all come to Chennai to hear you again; in fact some organisers from abroad come specially to check out upcoming talent.”

Sudha Raghunathan reminisced “Speaking for myself I began my career as a 20-year-old performing at the 12 pm slot and won the first prize, which was a “tamboora”. The prize also involved being offered an opportunity to perform the next year! So gradually, one moves up into being declared ‘Senior’ and singing in the evening slot. This took around 12-15 years, from 1991 onwards, and I am a prime example of a student being accepted as a serious singer, at the December season.” 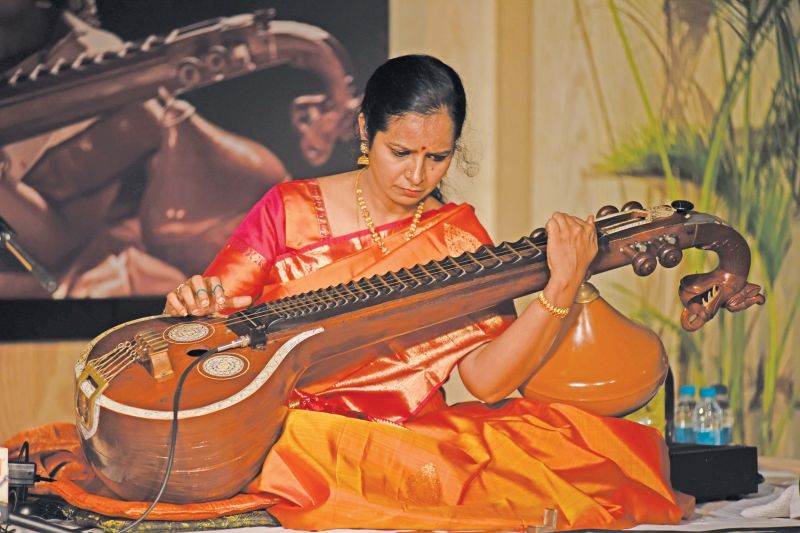 For Abhishek Raghuraman, the December season shaped him when he was a student. “In the1990s when I was a toddler, I used to listen to everybody, and it was simple as everything happens in the same place, in Chennai. I used to accompany my grandfather (Vidwan Palghat Raghu) everywhere, and heard everybody.” he shared.

Apart from providing a platform to upcoming musicians by ensuring a vibrant and varied audience, the December season is a very enjoyable interactive experience even for seasoned artists. In the words of Jayanthi Kumaresh “It’s like a huge wedding; everyone is out there, one is never eating at home, one is wearing one’s best, meeting everyone else, the paparazzi is out there, there is so much fanfare. Being in Chennai in December is very much a part of an artiste’s life. It’s really a unique tradition, and all artistes are really proud of the December season, and want to be a part of it. It’s really one of its kind. Each organisation has a special catering service with dishes named after the Ragas. It’s also linked with the weather - in Chennai the seasons are hot hotter and hottest; December is one month which is comparatively cooler. India can be proud of this festival!”

For Abhishek, “it’s a time to share ideas, we learn from each other and discover what the other has learnt. The audiences are amazing. From morning to night it’s all about music, it’s very concentrated. Throughout the year one travels, one never even meets other musicians. During the season, one relaxes and hears and meets others. The sheer volume and scale of it can be overwhelming; it’s up to you to limit yourself. I try to hear at least 3-4 concerts every season; I have so many friends I want to hear too.”

Sudha mused “One gets a high singing to these huge crowds, that only congregate during the December season - any other time in Chennai one doesn’t get this type of varied audience. It’s a challenge to constantly expand one’s repertoire, learn and present something new. For me, it’s now a ritual which is not even questioned - come December and I know

I will not step out of Chennai. Actually the season is like a big exam, to keep presenting a polished performance.”

Sadly, there are very few concerts of North Indian musicians, perhaps 8-10 the entire season. The Madras Music Academy invites one senior North Indian artiste on December 31 traditionally. Their archives have some wonderful recordings of greats like Ustad Vilayat Khan and Ustad Ali Akbar Khan, but these are so few.

“Lion of India” Ustad Rashid Khan says his concerts in Hyderabad, Bengaluru, places in the Dharwar region are frequent but somehow Tamil Nadu and Kerala host fewer North Indian musicians. “Sangeet to sangeet hai, chahe North ka ho ya South ka” (music is music whether of the North Indian tradition or Carnatic) he said; in North India most major festivals always now host Carnatic musicians, whether in his hometown Kolkata, Pune, Delhi Mumbai or even Jalandhar (Harivallabh) and Shimla. Ustad Nishat Khan (7th generation sitariya) echoed this when he verbalised “I wish there were more North Indian concerts; the audiences there listen with such intense interest.”

Another downside is the repetition of the same artistes; perhaps inevitable as the concerts are usually ticketed. Abhishek Raghuram admitted that now the season implies restraint for him.

He confessed “Personally I don’t sing more than 10 concerts during the season, which spreads over nearly 2 months, from end November to mid January”.

Jayanthi Kumaresh also said “By God’s grace I can now limit my concerts during the season. I grew up in Chennai, my musical career was launched in Chennai; there were times I would play two concerts a day and my fingers would be cut. However, as every organisation has patronised different artists at different points in their career, it’s important for an artiste to also shoallegiance by supporting that Sabha. But today I play less.”

Sudha Raghunathan also shared “I used to sing every day, upto 25 concerts in a month, sometimes even twice a day! So yes, it’s a strain on the voice. Today I sing once every two or three days; but even that is a strain.”

All in all, the Chennai December season is breathtakingly awesome; unless one has experienced it, it’s impossible to describe the type of vibe and buzz the city has during these days.

(The author writes on music, musicians and matters of music)