Washington DC: Pop icon Lady Gaga apologised to fans after she had to cancel her Las Vegas show following a severe illness.

Just a few hours before Gaga was to take the stage, the 33-year old posted an Instagram story - a picture of her lying on a sofa - and revealing that the rendition at the Park Theater at Park MGM had to be cancelled after she got ill with a sinus infection and bronchitis.

"I'm so devasted [sic] I can't perform tonight for so many people who travelled to come to see me. I have a sinus infection and bronchitis and feel very sick and sad," Gaga wrote alongside the image. 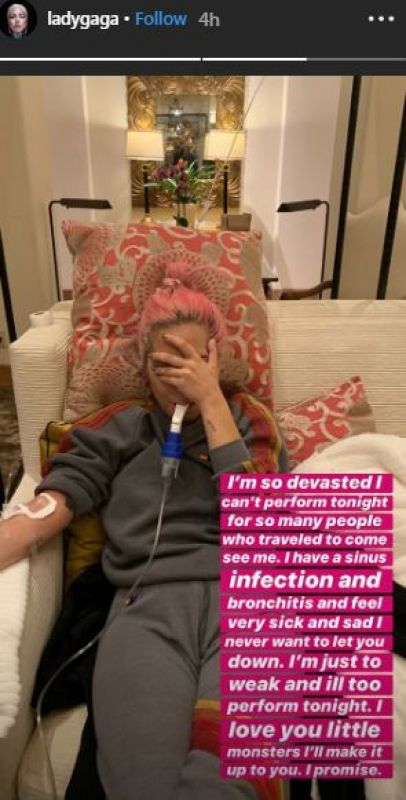 However, the pop icon assured her "little monsters" of making up once she gets fine. "I never want to let you down. I'm just to [sic] weak and ill too[sic] perform tonight. I love you little monsters I'll make it up to you. I promise," she added.

Gaga is also scheduled to perform on Friday and Saturday, but it is unclear if she will take the stage or reschedule the concerts.

This is the second time in a month that Gaga had endured some pain. A few days back, she fell off a stage while performing at a sold-out concert.

Despite the fall, she recovered fast and returned to the stage to continue her show, reassuring fans that she was unharmed. After the incident, Gaga posted a picture of her hand's X-ray on Instagram and revealed she had to go through a whole-body scan.

Later, she ensured fans that she didn't break any bones and wrote, "When they have to X-Ray almost your entire body..."