'Wonder' is the second film based off a novel to be directed by Stephen Chbosky. The first was Emma Watson starrer 'The Perks of a Being a Wallflower'.
Rating:

Director Chbosky previously gave us the gem 'The Perks of Being a Wallflower', and this time out he allows us to explore the fragility of friendship and family, and the importance of toughness in an individual. The movie ‘Wonder’ has strong messages about kindness, love, appreciating everyone for who they are and true friendship.

'Wonder' tells a story of a boy named August/ 'Auggie' (Jacob Tremblay), who was born with Treacher Collins syndrome; he has gone through 27 surgeries since birth. After years of home-schooling, Auggie is sent to a regular school by his Mom (Julia Roberts), against Auggie's Dad's (Owen Wilson) wishes. Auggie faces all types of problems that an individual experiences among a group of similar-looking people - being stared/frowned at, being accepted with doubts and suspicions, and also being bullied. However, Auggie is a tough-minded and intelligent person, and finally manages to gain genuine acceptance by most of his schoolmates and other people in the community. 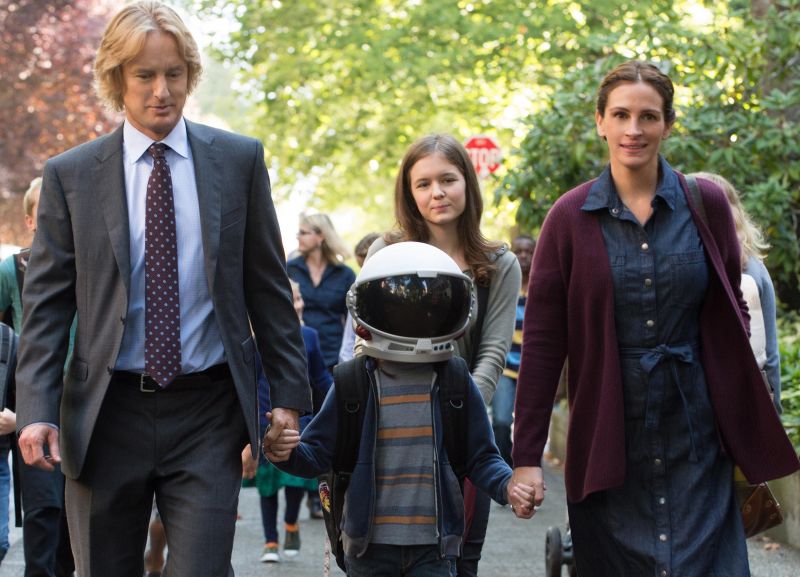 'Wonder' is based on the 2012 best-selling novel of the same name by RJ Palacio.

Writer and Director Stephen Chbosky's 'Wonder' is a wonder. His screenplay along with Steve Conrad and Jacob Thorne, based on the book by RJ Palacio is bold and fearlessly compassionate. Instead of maudlin sentimentality, Chbosky brazenly challenges our prejudice of appearances. In one beautiful scene, Auggie, so weary of the frightened looks of others, cries asking his Mom, "Why am I so ugly?"

Multiple character viewpoints of Auggie's classmate and friend Jack, his loving sister Via (Olivia), Via's distant best friend Miranda tells Auggie's story which gives 'Wonder' a level of originality and earnestness. This really helps the viewer connect with the film and makes it work as an engrossing and heartwarming picture. With each viewpoint, every moment of emotion fits like a puzzle and that convincingly flows in every scene.

The actors have done a fantastic job, Jacob Tremblay ('Room', 'The Book of Henry') proves again his talent as an actor. You won't recognize him because of the makeup but his expressions, voice and eyes are really persuasive. All the kids are amazing. Izabela Vidovic as Auggie's sister is especially very good. She beautifully portrays her suffering in the shadows while all the love is shined upon Auggie. Julia Roberts is excellent as Auggie's strong, determined mother and Owen Wilson, although decent, has a limited screen presence. Also, it was bit awkward to see him playing Robert's husband.

'Wonder' would have been an exceptional experience if it had avoided the usual crowd-pleasing cheesiness in the climax. There is also a brief scene about the family dog being put down which has no real connection to the content of the movie. The silly fight between the kids near the end felt out of place and unnecessary. Nevetheless, one could easily overlook these minor hiccups while being on the journey with the very likable characters.

'Wonder' is a simple, heartwarming and overall winsome drama with a lot of heart. It rightly delivers the message of kindness, forgiveness and the importance of self-love, which makes it a wholesome family entertainer.