Solo - A Star Wars Story movie review: As good as it could be

Just when you thought you had your fill of summer movies fun, especially the Sci-Fi kind, along comes ‘Solo: A Star Wars Story’, to let you know there is room for some more. Han Solo, arguably the most beloved Star Wars character, gets a handsome face from Alden Ehrenreich, an actor with same great charisma as Harrison Ford.

After the familiar 'A long time ago', we're treated to a bit more text setting up where this story begins (One probably going to miss that customary 'opening crawl' here). The young Solo (Ehrenreich) meets mentor Tobias Beckett (Woody Harrelson), his future buddies Chewbacca (Joonas Suotamo), Lando Calrissian (Donald Glover) and very much in love with Qi'ra (Emilia Clarke). The story of these characters' troubled relations align with bad guy Dryden Vos (Paul Bettany), as they attempt heists to get them money for their freedom. The action filled adventure ensues. 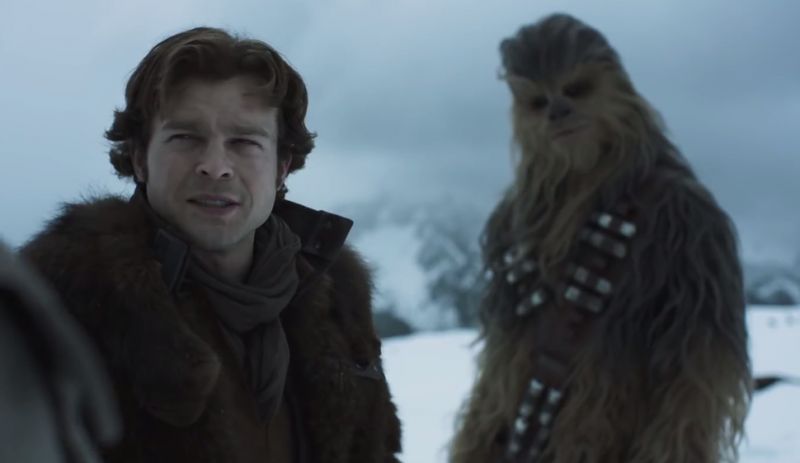 A still from 'Solo: A Star Wars Story'

The plot is simple but entertaining with some really cool twists and plenty of nostalgic moments for the fans and some interesting cameos. The established characters are all beautifully portrayed and there are some great Star Wars moments in this movie that fans have imagined since back in 1977. These scenes are never over the top or in-your-face, but well woven into the story with a fair amount of ‘fan service’.

To simply put, this film is about how Han Solo and his best buddy Chewbacca got to team up, how Han got the Millennium Falcon, and about the birth of the rebellion. Now these are big moments in the Stars Wars saga, but unfortunately they are being rattled off in mere minutes in this movie. We get too little time to get to know the new characters in the beginning, which makes it difficult to sympathise with them during action scenes. The movie is an action-packed and fast-paced adventure. However, sometimes the action gets in the way of the character development. Also, The relatively weak characterisation of the main villain somewhat impedes the thrill. Although Dryden is a formidable enemy, he is no Darth Vader.

Alden is utterly charming as the iconic character and he becomes more "Solo" as the film progresses. It was a daunting task to replicate Ford’s charisma, but
Alden nailed it with sheer brilliance. Glover is amazing too as Lando. He is almost better than Billy Dee Williams. Emilia gives a very nice performance with her very interesting character. The relationship sub-plot of Han and Qi'ra gives an edge to the story as its quite the complicated one, and you're never sure of which side she's on.

'Solo' isn't a Star Wars film with much potential which could fit into a fan boy's obsession with the iconic previous films. However, 'Solo' is welcoming entry into the Star Wars saga because it has an ability to stand on its own as enjoyable stuff.