'Hereditary' was premiered in January at the 2018 Sundance Film Festival.
Rating:

It's rare these days to see a horror film sans the deliberate jump scares, generic haunted house, insane demonic possessions and the over-the-top CGI laden third act crap. Think back to the classics, such as 'The Shining', 'Rosemary's Baby', 'Don't Look Now', 'The Exorcist', and more recently 'Get Out', 'It Comes At Night' and 'The Witch' - all of which took their time with characters, had a mounting sense of fear, and featured utterly practical effects. Debutant director Ari Aster, has obviously studied these horror classics, to make 'Hereditary' a cinematic experience that is both compelling and haunting.

Annie Graham (Toni Collette) is a miniature artist who lives in a seemingly secluded place with her family that includes her husband Steve (Gabriel Byrne), teenage son Peter (Alex Wolff), and 13-year-old daughter Charlie (Milly Shaprio). Ellen, the matriarch of the Graham family has recently passed away. Soon, another family tragedy ends up pushing Annie's mental state further until she meets a mysterious woman Joan (Ann Dowd). Slowly the Graham family begins to unravel cryptic and increasingly terrifying secrets about their ancestry. 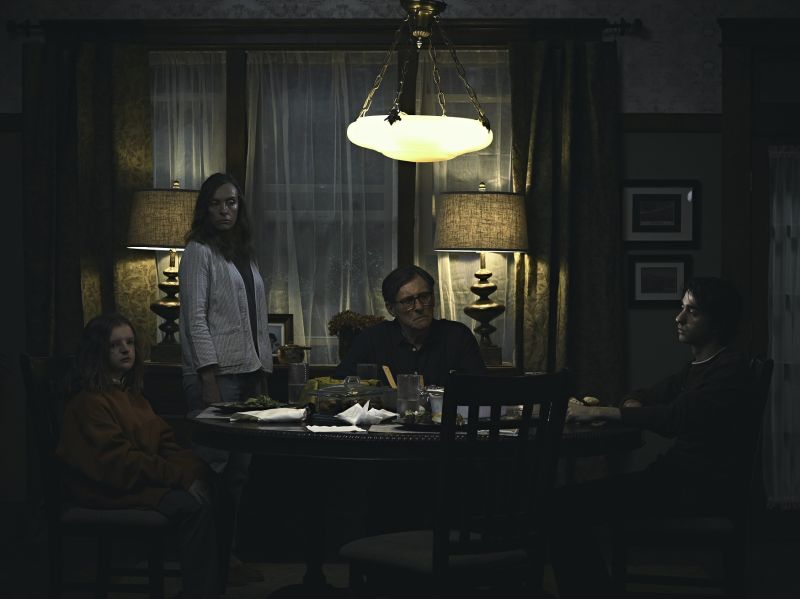 From the very first scene in 'Hereditary' you are uncomfortable with its masterly eerie setting, and that feeling only becomes worse as the movie progresses in a slow burn. The first half of the movie takes a little time in deliberate efforts to let you know and understand the characters. But once it shifts the gear, the film rewards you with an experience that will keep you gasping and crawling your hands. One of the striking aspects of 'Hereditary' is, there are no boo-jump scares here (even when there was a scope), instead the dread is placed with care and it blends in superbly with the mounting tension while mostly relying on psychological tricks to mess with your mind.

Colin Stetson's musical score is an absolute nerve shredder. It never conveys the generic screams and screeches to tell us to be afraid, neither it overwhelms a scene in any way. Apart from the scary stuff, the film continues to employ its style that serves a lot of magnificent shots; credit goes to Pawel Pogorzelski's impeccable cinematography. Most of the credit goes to director Ari Aster who makes it all compelling. In the times where jump scares are inevitable to our modern horror movies, Aster shuns today's tricks that depend on gore and repetitive noise. He brings back the genuine terror that can be felt in the quiet scenes. The director has set himself up for a talent not to be ignored.

This isn't a film like 'The Conjuring' or 'Insidious' series that gives you more than enough cues to be scared; instead, this film relies on your complete attention to detail and your willingness to be engulfed by its dark texture.

The acting is brilliant and heartfelt. You actually get a sense of genuine fear and paranoia that the characters are going through. Toni Collette is fantastic as is no surprise at this point in her career. She gives an incredible performance as a lunatic mother who is mourning the personal loss and tragedy. Both Millie Shapiro and Alex Wolff really shine and make this movie what it is. All other performances carry their own. The supporting cast is fantastic and they all have a time to shine at some point in the movie.

'Hereditary' isn't as abstract or encumbered with metaphors as, say, Darren Aronofsky's last years' highly divisive film 'Mother!', but it is still somewhat grimy and one shouldn’t feel bad for leaving the cinema with baffled face overwhelmed with twisted turn of events in the film. In the end, 'Hereditary' is ultimately a riveting and spiraling film which showcases what the genre is capable of when it's taken seriously by a talented director. This is an exceptional piece of film that pulls all the right stops to frighten the audience, leaving a lasting impression on your mind.