This dialogue from Secret Superstar remains crucial for multiple reasons. Firstly, it subtly explains the film’s plot, secondly it does some fine character development and helps the viewers to establish a bond with the film’s key character – Insiya (Zaira Wasim). Not only that, it also encapsulates the genuine distress over kids’ aspirations under uneven conditions to their future as far as their life and career goes - issue that some young kids, especially girls in India, have to face.

Debutante director Advait Chandan’s Secret Superstar tells the layered story of one such teenaged girl and her share of hurdles to live her dream.

Fifteen-year-old Vadodara-based girl Insiya has a great talent for singing and she dreams of becoming a famous singer. She is extremely close to her uneducated housewife mother (Meher Vij) who understands her daughter’s aspirations and supports within her own capacities. Insiya’s father (Raj Arjun) is abusive and a typical patriarch who loves his son and wants his daughter to be confined to the set realm. How Insiya breaks through herself and her mother builds up the narrative.

Aamir Khan plays an eccentric musician Shakti Kumar who meets Insiya at one point and mentors her. 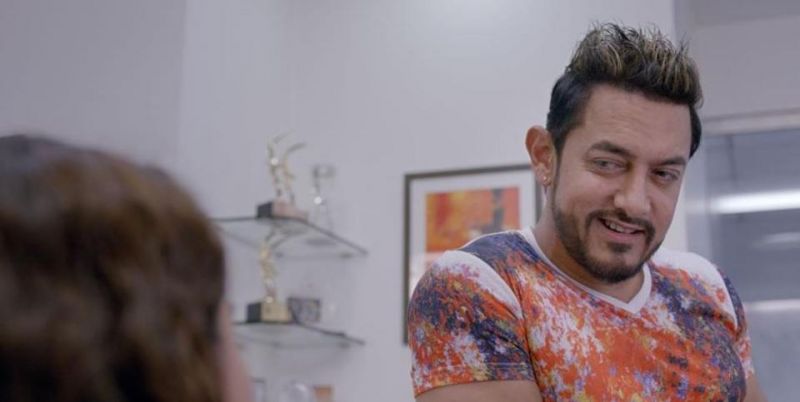 Aamir Khan in a still from Secret Superstar.

The story is not particularly new; in fact we have seen similar characters in another Aamir Khan starrer, Taare Zameen Par (2007), but what makes this movie remarkable is Advait Chandan’s solid narrative that hooks you up with enough moments of tension and excitement.

When the trailer was unveiled, it felt like it's giving a straight out idea of the story but there are many layers in the drama and some very good social commentary that ultimately makes Secret Superstar a satisfying watch. The nuanced drama proceeds to take you on an emotional roller coaster ride. You get so engaged that when the protagonist breaks free, you find yourself simultaneously wiping your tears and doing a victory lap. The climax is one that you see coming, but the journey to the finish is worth it.

Much of the film’s flavour comes from the right casting. After Dangal, Zaira Wasim gives yet another excellent performance. There are plenty of things in the script to prove an actor’s mettle and Zaira turns this opportunity to good account. In the role of parents, both Meher Vij as the mother and Raj Arjun as the father are terrific. While Vij shines in some of the best moments with Zaira in the film, Arjun doesn’t have a single false note in his impeccable act.

Aamir Khan adds his special magic in Secret Superstar. His character his wacky and flamboyant but surprisingly also deep as a good guy in isolation. Advait Chandan crafts some really humorous and emotional moments for him. Watch his meltdown during a song sequence when Zaira comes for recording. It is meritorious how a superstar like Aamir manages to leave a solid impression without ever overshadowing young Zaira.

Tirth Sharma as Chintan – Insiya’s classmate and her ‘best friend’ deserves a special mention. The scenes between the two are the lighter moments of the film and they are beautifully crafted. The innocence in their infatuation for each other is really cute.

Amit Trivedi's winsome music is another striking aspect of the film. Songs like ‘Main Kaun Hoon’, ‘Pyaari Ammi’, ‘Nachdi Phira’ are very charming and will stay with you after the film.

Although a little over-dramatic towards the end, Secret Superstar effectively strikes the emotional chord. With Zaira Wasim’s fine performance as the lead, this film has very good repeat value.