Ayushmann Khurrana is back with his latest entertainer 'Dream Girl'. The quirky comedy film stars Nushrat Bharucha as the female lead; but the real attraction is the returning of Ayushmann-Annu Kapoor duo after 'Vicky Donor' (2012). With an interesting subject, the fun-filled milieu of India's heartland and an ensemble of good supporting actors, 'Dream Girl' could exactly one expects from Ayushmann Khurrana-brand of cinema. Except, it quite isn't. It is an extension of it.

'Dream Girl' is the story of Karam Singh (Ayushmann) - a young, good looking guy from Mathura, who is the only son and of no financial support to his father Jagjeet Singh (Annu Kapoor), a widower, who runs a small shop from home. Karam's one of many talents include impersonating a woman's voice which has led him to play Sita in Ram Leela performances ever since he was a child. Desperate for job, luck brings Karam to Mr W (Rajesh Sharma) who hires him at his 'friendship call centre', where Karam becomes Pooja -- the lady who can charm any man with her nubile voice. Karam hides details of his new job from everyone, except his childhood friend Smiley (Manjot Singh). A comedy of error ensues as everybody - From the local cop Rajpal (Vijay Raaz) to a young Haryanvi boy Toto (Raj Bhansali), to heartbroken woman Roma (Nidhi Bisht) and a 'brahmachari' Mahendar (Abhishek Banerjee) - fall for 'Dream Girl' Pooja and her charming voice. Meanwhile, Karam finds his love interest in Mahi (Nushrat Bharucha), a pretty girl, who happens to be a sister of Mahendar. Soon the hunky dory world of Karam comes crashing down because of his secret. 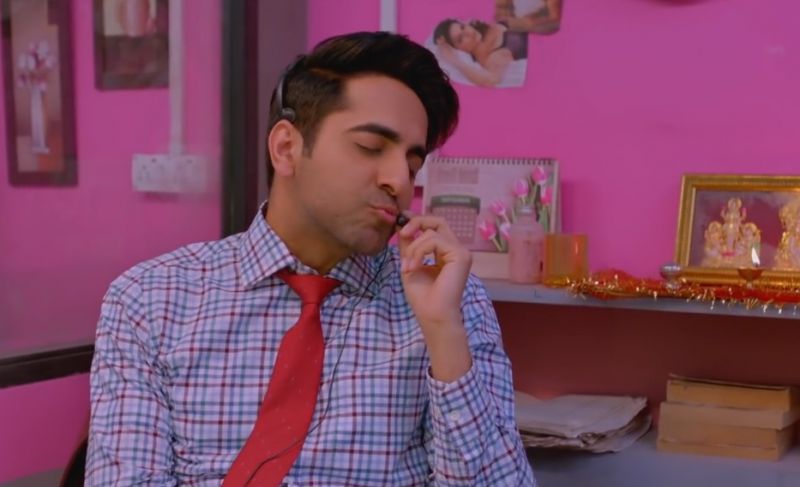 'Dream Girl' proves once again what happens when you have a good script and Ayushmann Khurrana together. Debutant director Raaj Shaandilyaa, who has films like 'Welcome Back', 'Jabariya Jodi' and TV show 'Comedy Circus' to his credit as a writer, presents a fascinating concept in the form of zany and entertaining comedy. It is a genuinely funny film and the main credit goes to Raaj’s quirky dialogue and a wonderful ensemble cast that delivers those lines at the right pitch. As a concept, this is over the top hilarious. The film doesn't really go in depth of the characters, it just simply lets Ayushmann Khurrana be a goof, which is what really the script is all about. The film surely has a heart but it doesn't have compelling enough scenes that make you care about the characters, it's just a light-hearted, crazy spin on a ridiculous situation.

The entire production hangs on the talents of Ayushmann Khurrana: he's versatile, energetic, improvisational, and hugely entertaining. It's hard to imagine someone pulling off playing the character diversity needed in this film better than him. Ayushmann brings out all his comedic talent in almost every scene, including voice acting, dancing, mannerisms etc. Centrally as a film it is what it is, a chance for Khurrana to dress up in drag and act the goof, but does he do it really well. He previously combined his dramatic and comedic talents in other films such as 'Vicky Donor', 'Shubh Mangal Saavdhan' and more recently 'Badhaai Ho' and does the same here. It's the kind of talent that seems natural, not studied or forced. The rest of the cast orbits Khurrana, but does so effectively. There's not a weak casting link in the bunch. Neither one tries to outdo their role, making sure that the limelight stays on the lead actor. Whether it is Annu Kapoor as Ayushmann's eccentric father, who could go to any extent to be with love of his life, or Manjot Singh as the concerned friend, the supporting cast are first-rate.

However, the terrific Ayushmann-Annu duo falls short to evoke enough laughter. While they both are terrific in their individual scenes, they miss the magic which was created in their earlier outing. It is a pity that director Raaj Shaandilyaa does not give enough meat to his supporting actors to chew on. Nushrat Bharucha is lovely despite the limited scope given to her character. She plays the girl next door who struggles with gender issues amidst a traditional setup. Frankly, it has become a trite idea of showing an independent, modern woman but what really baffles is her love track with Ayushmann, which is completely out of focus.

'Dream Girl' does have a certain flaws. Besides an implausible love-track, a collection of funny moments and thoughts is untidily stitched together. The film can't resist delivering a scene that involves hero's monologue in the climax sequence. There is an almost forced lecture on our over-reliance on social media apps, loneliness and true companionship. The idea is noble, but it results into somewhat superficial messaging and becomes anticlimactic. But by then, it hardly hampers the overall fun of watching the film. This is really one of those films that works on the strength of good writing and some good ensemble acting.

At the end, 'Dream Girl' is surely delightful but the humour in it will not be everyone's cup of tea. You have to give the film wide latitude. You will laugh, not only at Ayushmann Khurrana, but also at the dialogue and the plot's improbable situations. After all, a sense of the absurd is what comedy is all about.