'Ant-Man and the Wasp' is the sequel to 2015's Ant-Man, and the twentieth film in the Marvel Cinematic Universe (MCU).
Rating:

After shockingly grim moments in 'Avengers: Infinity War', fans desperately awaited the next movie in Marvel Cinematic Universe for any type of clues as to what will happen in next Avengers film. ‘Ant-Man and the Wasp', Marvel Studios’ latest offering is precisely the kind of movie which you would like to watch post the heaviness of superhero extravaganza.

‘Ant-Man and the Wasp' is set before the events of 'Avengers: Infinity War', and finds Scott Lang/Ant-Man (Paul Rudd) under home confinement for siding with Captain America in 'Captain America: Civil War'. Scott has also lost touch with his steady partner Hope (Evangeline Lilly) and her father and mentor Hank (Michael Douglas). A tech dealer named Sonny Burch (Walton Goggins) and a dangerous new nemesis "Ghost" (Hannah John-Kamen) complicate the matter and force Scott, Hope, and Hank to risk everything as the race against time on an urgent mission ensues. 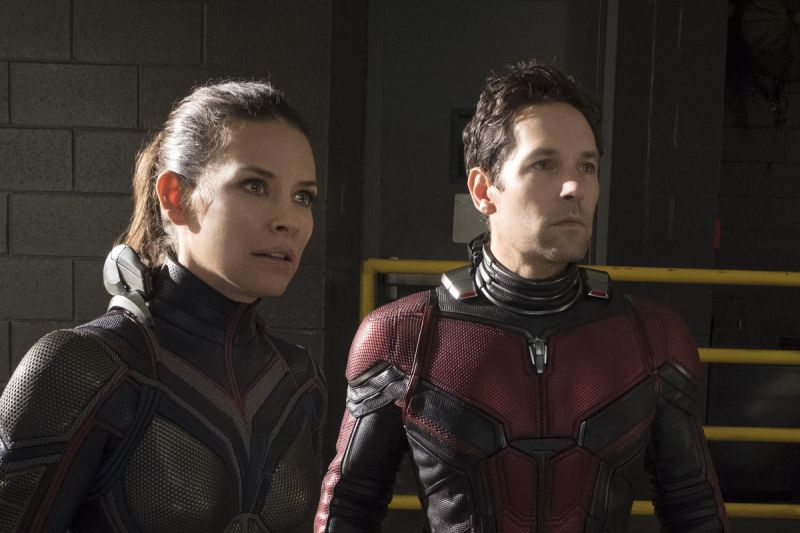 Paul Rudd and Evangeline Lilly in the stilll from the film.

Like Deadpool series, the stakes here may feel small but they are intimate and personal. However, the focus on family in the movie is rather cheesy which doesn’t quite resonate emotionally when it tries to. It's more a fun adventure with antagonists and obstacles that complicate things than the standard good vs evil struggle, making it distinct from the usual superhero fare. Hannah John-Kamen's villain (Ghost) is quite refreshing because it's not trying to destroy the world or anything. With a complex, layered and sympathetic personality given to the character, this villain is well rounded and a treat to watch. The comedy is cleverer this time around with good number of cool action sequences. Like the original it perhaps is not among the greatest of Marvel movies, but it has it's own unique charm that works just fine.

Coming to the performances, Ant-Man 2 features a good cast in Paul Rudd, Evangeline Lilly, Michael Douglas, Michael Pena, Hannah John-Kamen & others, and most of them do a fine job in their given roles. Lilly in the role of Hope Van Dyne (Wasp) steals the show. Rudd as Ant-Man is bit underwhelming this time thanks to his relatively lesser screen presence; but he is brilliant in certain comic scenes. Actors in supporting roles make the movie better with Michael Pena leaving maximum impact.

Overall, ‘Ant-Man and the Wasp’ is not as epic in scale as some of the past Marvel films, but thanks to a likeable cast and some genuinely entertaining scenes, it should keep fans happy until the next chapter in the series. Also, there are two scenes in the credits which are important to the continuity of the Marvel Universe. Stick around for an unexpected gasp of horror.