Tumbbad opens with Mahatma Gandhi's famous saying, ''There is a sufficiency in the world for man's need but not for man's greed". Based on the story by Narayan Dharap, this supernatural thriller takes the audience on an exhilarating ride with a fascinating tale of grim morality. Director Rahi Anil Barve has crafted a film reminiscent of the traditional stories which are beguiling yet simultaneously frightening.

Penned by Mitesh Shah, Adesh Prasad, Rahi Anil Barve and Anand Gandhi (Ship of Theseus), the film begins in a village called 'Tumbbad' where it rains incessantly. A widowed mother lives with her two sons. The family leads a life of misery due to the great-grandmother of the family, who is believed to be cursed by Hastar - a mythical creature disgraced for his insatiable greed for wealth and food. Vinayak Rao, one of the young boys, is obsessed with discovering the whereabouts of Hastar’s buried treasure in 'Wada' (family mansion). 15 years later, now grown-up Vinayak (Sohum Shah) returns to Tumbbad in the quest for gold. Will he succeed? 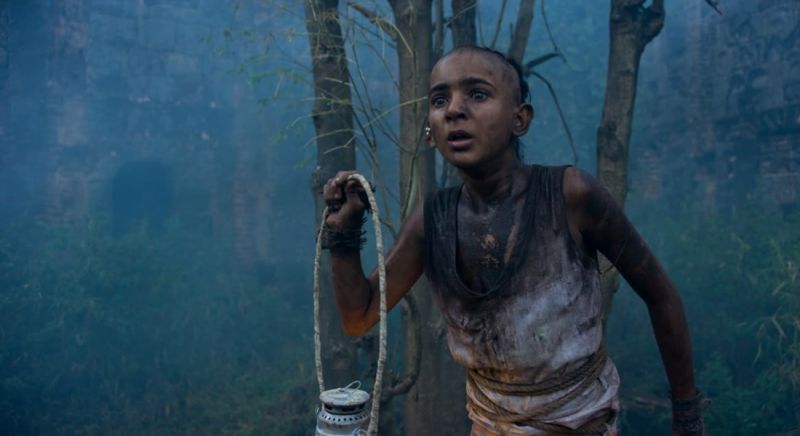 A still from film Tumbbad.

Tumbbad is a movie with a simple and straightforward plot which contains layers and layers of intelligent writing, metaphors and message. The story is a compelling and deeply involving one, and the film is beautiful, exciting, and sometimes horrifying. One of the fundamental rules of any good supernatural tale is that, no matter how fantastical it becomes, it must make sure to keep one foot firmly planted in reality so that the story can easily connect with the audience. In the case of Tumbbad, that foot is so firmly planted that it prevents the film from cutting loose and thus leaves the audience amazed and scared. This film is miles above the average Indian fantasy-horror film in terms of both sophistication and vision. Director Rahi Anil Barve has fashioned a dark, violent, exquisitely realised world filled with strangeness. The result is wildly creative film that engages both heart and mind in equal measure.

The acting is all excellent especially from Sohum Shah who gets the multiple nuances of his character correct and gives an enthralling performance as Vinayak. The supporting cast is well formed, seems suited and does their work with all the conviction. But the story and the exceptional fluidity with which the camera and sound tell it are the real stars here. The stunning production design by Nitin Zihani Choudhary and Rakesh Yadav, Pankaj Kumar's impeccable cinematography and Jesper Kyd's terrific background score are some of the crucial factors to make Tumbbad what it is. The film neatly puts its technical richness on display to create a tense, eerie and melancholic feel to give us a true atmospheric horror.

There are no wasteful scenes in this film but there are some really gruesome and disturbing ones. This film is violent, but not in the futile, obnoxious way. It is violent in a realistic manner that counter-balances the fantasy portion of the story in a non-gratuitous way. All these violent scenes are entirely appropriate to the telling of the story, although many of them are difficult to watch.

For all its good points, Tumbbad winds up disappointing us a bit in the end. Once you get familiar with the set-up, the film gets a bit slow in the second half which draws our attention to certain unexplained things. For much of its running time, it creates a lot of questions and barring few it leaves us flabbergasted without answering most of them. But that’s not necessarily a stumbling rock here as Tumbbad is smart enough to do so intentionally, and perhaps it’s that mystical nature which will make this film linger in your memory for very long.

■Hrithik Roshan feels Sohum Shah has made us all proud by making Tumbbad
■Sohum Shah on Tumbbad moustache, says there’s no replacement to commitment
■Makers of Tumbbad help the audience unravel the mystery with 'The Legends of Tumbbad'