Director Amar Kaushik is wise enough to allow an actor like Ayushmann Khurrana to go hog wild in displaying his talent for comedy. Khurrana, who also recently showed his talent for comedy in 'Dream Girl', allows himself to go as ridiculous as he wants in 'Bala'. Interestingly, while doing so, he still manages to derive a ton of laughs with mere facial expressions and delivery of one-liners. From his very first shot of a 25-year-old version of the film’s character looking tense in the mirror, except he is half-bald, is an instant laugh grabber, and Khurrana doesn’t seem to let up throughout the film.

Balmukund Shukla aka Bala (Ayushmann Khurrana) is young lad who lives a routine life in Kanpur. Bala, who once had silky smooth hair, now suffers from premature baldness, which becomes the reason for his low self-esteem. Bala works as marketing person for cosmetic brand that sells fairness cream. The face of this brand is Pari Mishra (Yami Gautam), whom Bala crushes on. As luck would have it, Bala finds a provisional 'fix' for his hair problem and woos Pari with his innate charm. As the two decide to get married, Bala is still hesitant about telling his wife the truth. Meanwhile, Bala's neighbour Latika Trivedi (Bhumi Pednekar) is a young confident lawyer who doesn't let her dark-complexion get into her way. She shares love-hate relationship with Bala since their childhood and often ridicules his situation, but also has soft spot for him. When Latika unintentionally reveals Bala’s 'shameful' secret, his life falls apart. 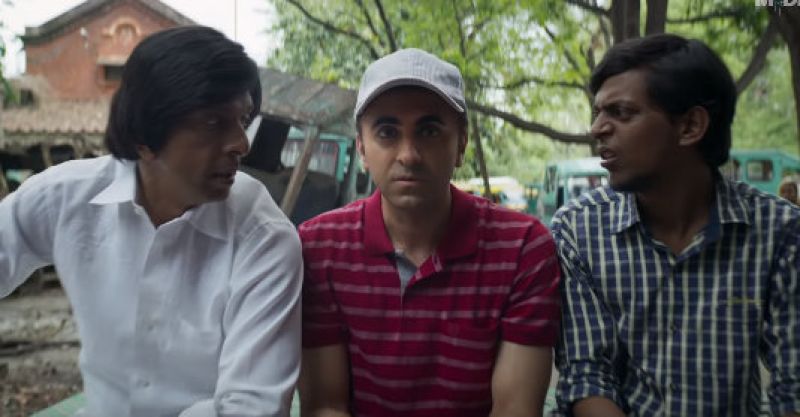 A still from the film. (Courtesy: Youtube/ Maddock Films)

After showing his flair for comedy in debut film 'Stree', director Amar Kaushik uses great characters, great lines, and great humor styles to his advantage here. 'Bala' is a surprisingly serious work of social criticism. It gently enlightens us about empathy, self-acceptance, individuality, and also talks about gender stereotypes, societal standards of beauty, our over-reliance on cellphones and how it's affecting our interpersonal skills. But at the same time, the film is also very funny and poignant. This is one of those films that works on the strength of good writing and for that credit goes to writer Niren Bhatt.

The situations in the film are real and the dialogues are quirky, and at times it sounds like it's too much, but that's what those characters would say in those situations. Kaushik handles a very real and sensitive issue in a mature and sensitive way which never once interferes with the comedy on screen. For instance, Bala could quite easily become a figure of ridicule, yet this film is executed in such a way, that he is never anything less than our hero. We like him and wish him to succeed.

Within its very mainstream, crowd-pleasing confines, 'Bala' is a pretty enjoyable romp. That said, the film is not without faults. If it were 20 minutes shorter, it would be that much closer to perfect. The film is really much longer than it needs to be. There are certain long scenes in the later half that don't arouse laughs and that don't really contribute to the plot. The story is clever but too predictable and as far as romances go; it's quite simple. It deals with Bala's relationship with Pari for a long time and we all know what's going to happen in the end. The other characters each have funny little stories to go along with their slightly exaggerated personalities and they all work on a certain level but not the way Bala does. These are these small shortcomings but there's so much good here that one can easily ignore it's few faults.

Ayushmann Khurrana has established himself as the go-to actor to play the extraordinary ordinary man. With 'Bala', he has once again proved that there's no match for his screen charisma and comic timing. Bhumi Pednekar is impressive as no non-sense, confident girl. This is her yet another daring character and she utterly immerses herself into it, sans any inhibitions. Yami Gautam is equally good and looks gorgeous. She shares palpable chemistry with Ayushmann and it's delightful to watch them on-screen together. 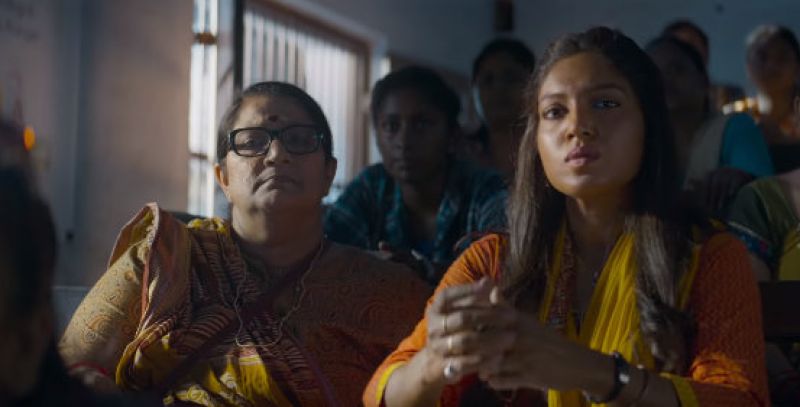 A still from the film. (Courtesy: Youtube/ Maddock Films)

It is a pity that Kaushik does not give enough meat to his supporting actors to chew on. What a waste when you have people like Seema Pahwa, Saurabh Shukla and Javed Jaffrey.

Overall, 'Bala' is one crowd-pleasing, feel-good movie that starts off with a laugh, and ends on a heartwarming note. It is sometimes crude, sometimes predictable, but the film has a likable cast and delivers some poignant messages about self-love, acceptance, companionship and of course, bald is beautiful.