Venom is intended to be the first film in Sony's Marvel Universe. (Courtesy: Sony Pictures)
Rating:

Based on the Marvel comic character of the same name, Tom Hardy starrer Venom is the first film in Sony’s Marvel Universe. This surprisingly dark and moody superhero yarn was a great and unexpected surprise, but the very sleek idea is marred by overwhelmingly ordinary execution. Venom achieves nothing as a movie. There is no enjoyment from watching, no much interest in the acting, and certainly no belief in the story, whether it be a comic (anti) hero or not. It feels nothing more than a product trying to cash in on another profitable Hollywood trend, the Marvel Superhero, which barely brings anything new to the table.

Eddie Brock (Tom Hardy) is an investigative journalist who attempts to revive his career after losing his job and estranged girlfriend Anne (Michelle Williams). Accidentally, Eddie comes in contact with an alien symbiote – Venom, which is discovered by Carlton Drake (Riz Ahmed), a megalomaniacal leader of the Life Foundation experimenting on the symbiotes. Venom bonds with Eddie and gives him superpowers as long as they share the same body. 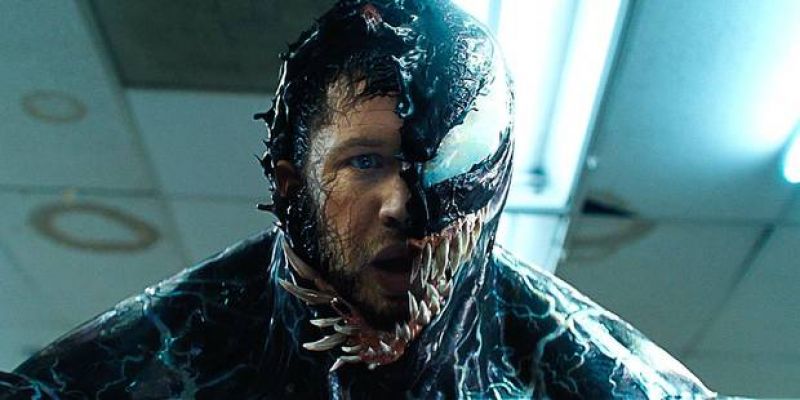 Tom Hardy in and as Venom. (Courtesy: Sony Pictures)

The lead actor Tom Hardy is actually as close to perfect for his role as can honestly be expected. Hardy is actually good, but not good enough to save this train-wreck of a film. A bit more time spent building his character well and giving the story a bit more sense would have helped. Tom Hardy and Michelle Williams are bright spots, as they have enough chemistry together to hold the film through its low points, but the script lets them down with cheesy dialogues and cringe-worthy romance. The supporting star cast is just serviceable including Riz Ahmed’s super bland villain, Riot.

Once Venom finally shows up, the pacing gets a little better. The crazy banter between Eddie and Venom is an interesting watch. These scenes are entertaining in parts and show some potential with Venom's character. However, the humour is not consistent and it’s all over the place. The film volumes up its darker tone, but it ends up being bizarre and lazy than smart and gritty. The proceeding is so dull, it seems like nothing happens until the last half hour of the runtime. To add to the misery, one can predict most of the plot and the twist and turns from a mile away. The action sequences are quite generic, and nothing really stands out as memorable and stuff you haven't already seen loads of times before in superhero movies.

In the end, Venom is a major misfire. It's far away from such successful adaptations as Spider-Man, X-men or even Deadpool. But mind you Venom is a hero more interesting than a pile of other Marvel superheroes on most days. Perhaps the next will be better?

Watch Tokyo Trial if you are a history buff