Roma had its world premiere at the 75th Venice International Film Festival.
Rating:

Roma is a beautiful film that send across a message about human nature and relationships, unconditional love, politic and violence. Mexican film director Alfonso Cuarón (Gravity, Children of Men) directed, co-produced, wrote, edited, and shot his passion project he's been talking about since 2006. The filmmaker smartly decided to make this film entirely in monochrome. Many producers would have probably thought he was crazy for trying to make a film like this in these days where viewers are used to seeing high-tech, spectacular and colourful movies with great sound and in jaw-dropping 3D. However, Roma works perfectly and is one of the brightest films of the year despite being in black and white.

Roma tells a story of a singleton named Cleo (Yalitza Aparicio), who works as a full-time caretaker and maid for an upper middle-class family in Mexico City in the year 1971. Cleo takes care of their house and children. Due to certain unexpected events in her life, Cleo's state of mind begins to change which also shows effect on her relationship with the kids and the mother. What is Cleo's fate? 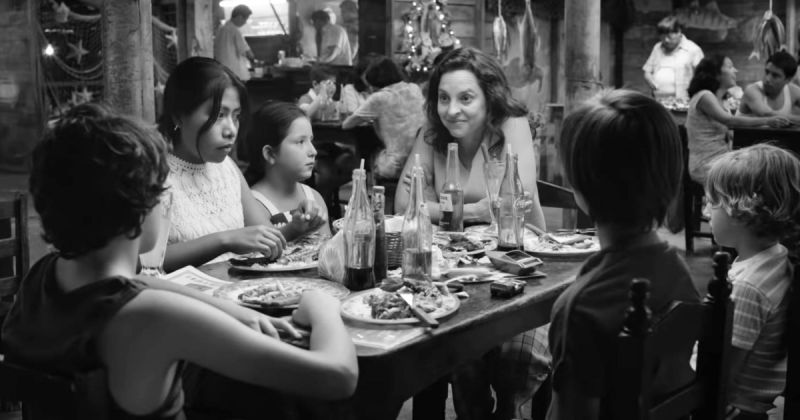 A still from Roma.

In Roma, the premise of the story isn't exactly extraordinary, but the kind of approach filmmaker uses to narrate it makes all difference. With this in mind, it couldn't have been successful without its pitch perfect production design and heart-warming performances from its stellar cast of Yalitza Aparicio and Marina de Tavira. Most importantly, though, above all is the gorgeous cinematography by Alfonso Cuarón. Each frame has a richly textured black and white aesthetic. Filmed in monochrome and mostly with natural sound, it really makes you watch the action and take in every detail. The continuous long shots show so much is going on in the backgrounds from the sounds and images of crowds of people, dogs barking, vehicles, birds chirping to even planes flying by. The supremely utilised Dolby Atmos sound technique only enhances the overall effect giving us a surreal, immersive experience.

Yes, Roma is certainly a monochrome film, but it doesn't try to fool us into thinking that it was in the '20s. Many traditional conventions are used, but director Cuarón doesn't restrict himself to them. Cuarón's labour of love is a sublime creation in which old fashioned film making meets with modern film making techniques, without ever compromising on storytelling prowess. The appeal of this film is centred on animated performances, heartbreaking situations and a genuinely stellar attempt at something strikingly different.

Every once in a while a film comes along which is so charming, so flawless that you leave the cinema feeling happier and hopeful than when you went in. Roma is a once in a generation piece of film-making which will hopefully be recognised at the Oscars.