Dench reprises her role as Queen Victoria from Mrs.Brown (1997).
Rating:

“Life is like a carpet, we weave in and out to make a pattern”, says kind-eyed Abdul Karim (Ali Fazal), an Indian servant, to the British monarch, Queen Victoria (Judi Dench) in the initial set up of their tender bonding. Victoria & Abdul, directed by Stephen Frears, has a lot of heart and some genuinely sincere moments. Beginning with a coy disclaimer that reads, “Based on true events…mostly”, the film starts off with a promise of telling a fascinating story, but soon reduces to the wonted melodrama.

This film carefully documents the contentious relationship between Queen Victoria and her servant and closest confidante in later years, Abdul Karim.

The story begins in 1887, in the honor of Queen Victoria, a ceremonial coin (mohor) is minted in India, which has been under formal British rule for nearly three decades. Two Indian clerks, Abdul Karim (Fazal) and Mohammad (Adeel Akhtar) are chosen to present the coin by virtue of their height. On arriving England, they believe to be there for a short period of time but end up in the series of unexpected events. Queen Victoria, who is in her twilight years now, is tired of inexorable royal duties. She longs for some novelty which young Abdul, with his wise knowledge and great storytelling skills, fulfils delightfully. Abdul considers the Queen a very special person and their kindness towards each others is enthralling. He teaches her the Quran, Urdu language (then called ‘Hindustani’) and gives her interesting cultural insights. She declares him her ‘Munshi’ (a teacher) and allows to let his wife and mother-in-law come to England to stay with him. As time goes on, the two develop a very strong friendship that shocks her racist and classist court and heirs. 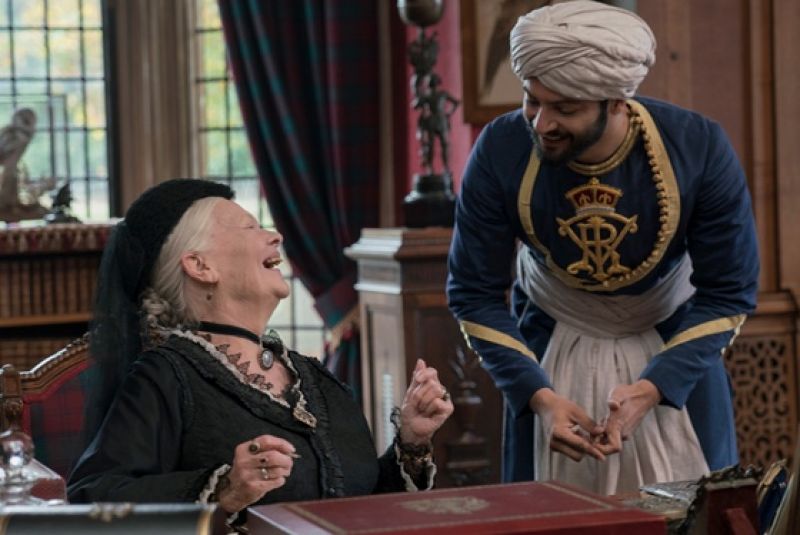 A still from Victoria & Abdul.

The setting is quite remarkable here. The film highlights the fact that the Queen was truly a non-racist in an era of unthinkable racism. The film attributes some fairly progressive views of hers, like the appointment of a Muslim to a key role in royal household is a conquest for diversity. Judi Dench, who was previously seen playing younger version of the Queen in Mrs.Brown, is in terrific form once again. She masterly captures all the nuances required to convincingly play an aged, lonely yet determined Queen. It is absolutely amazing to see her playing weary and spunky with equal believability. Ali Fazal performs his innocent and charming character of Abdul nicely. It is a big feat for a young actor to be able to stand in front of an accomplished actor like Dench and he has managed to make most of the opportunity. The rest of the cast is condemned to represent a gallery of caricatures.

Stephen Frears (Florence Foster Jenkins, Philomena) struggles to manage the smooth flow of the story. A fascinating story like this deserved a nuance direction but Frears’ direction comes off one note. The screenplay by Lee Hall is uninspired. When the movie finally begins to take itself seriously in the last act, the transition feels rather bumpy. After the jovial first half, the scenes get repetitive and eventually turn into an ordinary fare. The Indian music that plays in some parts only annoys you as it traces the same generic stuff we listen to in every other English movie.

Overall, Victora & Abdul is a could-have-been-better movie about an interesting story. Despite the ravishing chemistry between lead actors, the film is an underwhelming watch.