A still from Sonchiriya.
Rating:

Sonchiriya is by far most ambitious work for director Abhishek Chaubey for the various reasons. Films about caste-divide, gender-discrimination, patriarchy are rare because we are guilty of hiding the shameful aspects of our society, and in that case Sonchiriya hits like a sledgehammer. It is the seminal film about social ills prevalent in society today that Bollywood usually fears to tackle. Sonchiriya tells an irresistibly powerful and nuanced story, in a way that does not shirk away from portraying the horror. And that works as the biggest USP of this film.

Set in the Chambal Valley during 1975, Sonchiriya revolves around a bunch of fugitives and their desperate hope to survive. The films chronicles its story through three keys characters - Maan Singh (Manoj Bajpayee), Vakil Singh (Ranvir Shorey) and Lakhna (Sushant Singh Rajput). When an absconding woman Indumati (Bhumi Pednekar) crosses the path with the group, it creates different kind of rift between them. At the same time, an unforgiving policeman Virender Gujjar (Ashutosh Rana) is on mission to hunt them down as he has personal vendetta against these dacoits. Will they survive the fate? 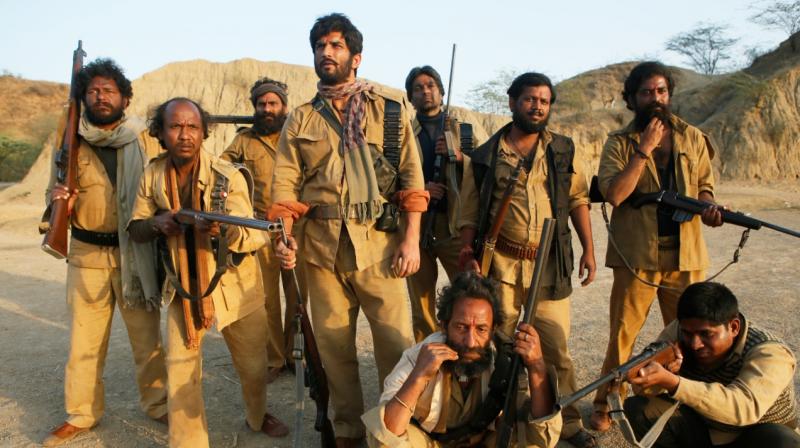 Sonchiriya is a film of searing sincerity and insight, whose central characters are drawn with real complexity. Director Abhishek Chaubey's unflinching eye shows you everything you need to see to form a judgment. He shoots long takes in which the action (as in the emotional action, or intention) is the focus, involving us deeply and meaningfully in the characters, their circumstances and the broader context. The impact is strong. The film is perfectly paced, with just the right amount of lingering mood and tense action. It is well served by a wonderfully structured screenplay by Chaubey and co-writer Sudip Sharma. It is not as violent or gory as Shekhar Kapur's Bandit Queen, a seemingly conscious move that actually works in its favour. Capturing the harsh realities of the era and emotional complexities of the characters, the film is extremely powerful. Anchored by terrific performances by its star-ensemble, Chaubey brings his assured directorial mind to a harrowing, yet eerily beautiful film.

The technical accomplishments are something to admire. Anuj Dhawan's cinematography is highly impressive. The use of sequence shots, with the camera surrounding and swaying around the characters, makes the story more fluid. The camera sure lingers at the most important points of each scene, and
background score by Naren Chandavarkar and Benedict Taylor is thankfully no excess for sentimentalism and leaves a big room to fit harsher moments.

Sonchiriya is filled with astonishing, gut-wrenching performances. Sushant Singh Rajput's Lakhna is a character with a fire burning beneath the surface. His performance is typically unshowy yet subtle, conveying a dignity and humanity that the film needs in the face of such unfathomable injustice. Bhumi Pednekar is the emotional epicentre of the entire film. She evokes a woman of torment and sadness perfectly. The film unearths terrific performances from the two outstanding actors - Manoj Bajpayee and Ranvir Shorey. The always dependable Bajpayee makes an important cameo appearance, and, by all accounts, he is one of the main catalysts for the film to happen. Ashutosh Rana, although impressive, acts more like a typical villain than an actual believable character. Other supporting roles are well played, but a number of them are relegated to small appearances. This is essentially Rajput and Pednekar's film.

Sonchiriya is significant, necessary piece of work, one that stays with you long after you rise out of your theatre seat. Although to be warned, watching Sonchiriya is never easy, but again so was the context. It is definitely not for the faint-hearted.