Baiju Santhosh, the child actor with an impish smile in Balachandra Menon's Maniyanpilla Adhava Maniyanpilla (1981), has come of age, thanks to directors who have discovered his prowess for being more than supporting and villain characters. The career breakthrough came with Ranjith’s Puthan Panam.
“Puthan Panam gave me the break. It’s true that directors seldom gave me solid roles. And I never went begging to be cast. Believe there is a time for everything. If it’s not right, whatever we do will be in vain"; ‘Ellathinum athintethaya samayamundu dasa’ dialogue from Nadodikkattu is true", he says.

His portrayal of Stephachayan in Ente Mezhuthiri Athazhangal was critically acclaimed. Anoop Menon posted a video on his Facebook page and wrote ‘Baiju Chettan... a great performer indeed...see his voice modulation’. Director Viji Thampy specially mentioned his performance on his Facebook post after seeing the movie. He sported a bald look in the movie, excelling in restraint.

He was recently in news after the poster of Jeem Boom Bhaa movie was released. The poster had Baiju Santhosh and Askar Ali reprising the look of John Travolta and Samuel L. Jackson in Pulp Fiction. The poster went viral in no time. “Clay Ravi is my character. In Thiruvananthapuram, ‘clay’ is used to refer to goons. Though illiterate, he lives a comfortable life by lending money and intimidating people. It’s an interesting role and one of the central characters in the movie. They might have included my face on the poster as people are very familiar with me.” 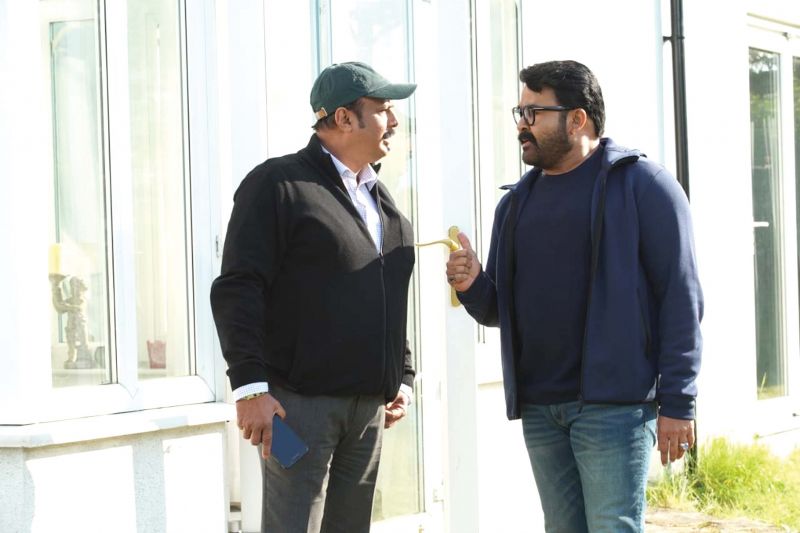 A still from Drama.

He is very much excited about Ranjith’s Drama which is set to release on November 1. He was happy to collaborate again with Ranjith, who is one of the reasons for his ascent.

“The movie deals with a theme which hasn't been narrated in Malayalam. It's a pucca humour movie and I’m sure it will have audience in splits. Lalettan and I are colleagues and we work for a Malayali boss. It is after some years that he is doing a freewheeler. Everyone will see the old Lalettan in this. My character is also prominent. The shooting location was relaxed as if we were on a college tour,” he says.

He’s very pleased getting many good characters. He is also part of Prithviraj Sukumaran’s directorial debut Lucifer. “I play a politician, Murugan. It’s a pivotal character suffused with humour elements. Don’t ask me more, rest you see in theatre,” he quips.

Next is Zam Zam, the Malayalam remake of Hindi movie, Queen. Kangana Ranaut’s role will be reprised by Manjima Mohan and he will play her father, originally done by Yogendra Tiku. The challenge is essaying Thalassery slang for the character. His career straddles generations. Movies have changed a lot since his debut days. “I was fortunate to act with many senior actors in their prime. Movies change as time moves. The taste for humour has changed. It was so difficult to work out humour those days. Nowadays, the youth like to deal with reality. The humour doesn’t need depth to get carried.”

Currently he’s shooting for Haneef Adani’s Mikhael and Harisree Ashokan’s An International Local Story. Both roles have humour. “In Mikhael, I play a doctor who runs a hospital. Like many hospital owners, this guy is greedy and does unnecessary tests on every patient. He’s not interested in treating them."

He will be soon joining T.K. Rajeev Kumar’s Kolambi, in which he plays a khatib (mukri). The movie will be shot with sync sound. He’s also set to play lead role in Jishnu Sreekantan's Pidikkittapullikal, which will have Sunny Wayne as the other lead. He is a lead in Nadirshah’s Mera Naam Shaji, in which he will don the role of Shaji from Thiruvananthapuram. Next to be shot are movies of John Varghese, actor Musthafa and a movie from Friday Film House.

Direction plans? “No way”, he says. “I don’t have the patience to direct. I love to act. I’m nearing 300 movies and believe people love to see me on the screen. Whenever my face appears on screen, they are curious to figure out the character. A character needs a lot of inputs from the actor. The director and writer have their idea of the character, but it's our involvement that takes it to another level. Only such actors have a long run. I never judge the character by its screen length, all that matters is the substance. It’s great that I’m getting credible characters now. I’m exploring the actor in me and I love that,” he signs off.