A small editing suite near director Mani Ratnam’s office was where Suriya met director Selvaraghavan for the first time. It was 2000 when Suriya was busy with his path-breaking film Nandha and he did not waste an opportunity to ask the ace director for a role in his forthcoming films. It took 19 long years for that desire to come true. Selvaraghavan and Suriya have collaborated for the first time through the former’s film Nandha Gopalan Kumaran (NGK), in which Suriya plays the titular role of Nandha Gopalan Kumaran. It was the actor himself who recounted this experience while he took to the stage in Kochi during the promotion of the film. Seated behind him, director Selvaraghavan smiled –— perhaps in a shared remembrance of that incident years back.

Kollywood seems to be leaning towards films that either deal with politics, farmers’ crisis or corruption. “We have seen a lot of political films, which have been cherished and appreciated, but NGK approaches politics differently,” begins Suriya, revealing that the film deals with politics at the grassroots-level and not party politics. The film, he says, is about a youth from a middle class family, who lives with his parents and his wife and craves to bring a change in the system by being a part of it. When he does take the political plunge, his mother terms it a graveyard while a politician points out his place in the system.

As an actor, Suriya approaches each film with a desire to make it unique, be it through the script, the treatment or his acting, thus offering a novel experience to his viewer. But he is frank enough to say, “Sometimes, whatever said and done and how much hard work we put in, some projects do not meet audience’s expectations!”

The actor feels it is a huge responsibility to meet expectations.

So, it was a conscious decision on Suriya’s part to diverge from the pure entertainment format to go for a tight and engaging script that NGK has. An actor who has proved his mettle, Suriya is mature and big-hearted enough to admit that some films have high levels of expectations and are followed by worldwide fans solely riding on the director’s name. “I believe that any film revolves around the director and in NGK’s case, my name can never overshadow Selvaraghavan’s. I am his huge fan and have waited 19 years to work with him.”

Suriya reveals that his character Nandha Gopalan Kumaran was very close to Selvaraghavan’s heart and that Suriya saw the legendary director transform into NGK. 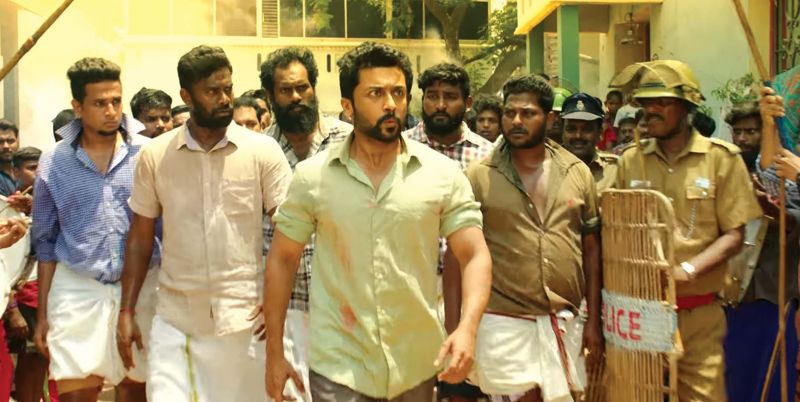 A still from the movie NGK

“For an actor, it is always great to have a fantastic script and a director, but not every actor is lucky enough to work with a director who will explain the workings of the inner minds of his character. Selvaraghavan acted out his vision of NGK and the emotions that he brought to the acting table were very different from what I had read in the script and planned to do. Selvaraghavan’s vision of NGK was several notches higher and more elevated than what I had in mind, and I took some time to grasp NGK’s emotions, feelings and state of mind.” The result was a fresh experience for Suriya, who was challenged every day, keeping the actor on his toes and engaged throughout the shoot. Suriya’s praises are high. “Selvaraghavan’s craft by way of staging a scene and enacting it was a completely new experience for me.”

The actor offers lavish praise for his co-stars Sai Pallavi and Rakul Preet Singh. On her part, Sai Pallavi spoke about a pleasant coincidence. “Four years ago today, Premam released and I am so happy to be back in Kerala on the same day. Even after acting in some films after Premam including the recent Athiran, I am still addressed as Malar by my fans, which makes me so happy.” Coming back to NGK, she says, “I am a huge fan of Suriya. Through this film, I have learnt a lot of acting lessons, thanks to the guidance of both Suriya and Selvaraghavan. I find myself turning out to be a more confident actor.”

The movie has Rakul Preet Singh performing stunt sequences, a rarity for women in Tamil cinema.

Suriya staunchly says that every time he visits Kerala, he is astounded with the love and smiles he receives from the people of the state — be it at the airport, the roads or the hotels. “Though I work predominantly in Tamil, the admiration and love that I receive from Kerala leaves me humbled,” he graciously says and counts that as a blessing. The handsome actor believes in keeping his pulse on the happenings in Mollywood. “I enjoyed Premam and I want to see Uyare about which I have been hearing a lot of good things. I watched Lucifer recently and thoroughly enjoyed it. It has been a while since I have spoken to Prithviraj and I completely enjoyed the way he showcased Mohanlal in Lucifer,” he gushes.

Talking about Mohanlal, Suriya is acting with the actor in his upcoming film Kaappaan and has this to say, “I just could not believe that I was acting alongside the legend in the same frame. I remember the first shot where I had to marchtowards Lal sir and it seemed surreal. He is a person who will come down to your level and gels with your thought process making one forget how legendary a personality he is! We have shared a lot of personal and professional thoughts. Lal sir is a wonderful human being with whom I felt I could speak anything under the sun.”

With many of his fellow actors taking the political plunge, a question was thrown to Suriya about any political aspirations from his side, which he firmly negated. The actor nonetheless prefers to use his Twitter and other social media handles to share his views on developments close to his heart.

NGK will hit the screens on 31 May.