Traffic directed by the late Rajesh Pillai was a path-breaking film in Mollywood. It also paved the way for Kunchacko Boban, known for his chocolate boy roles, to overhaul his image to that of a serious actor. The duo of Kunchacko and Rajesh went on to work in Vettah, which released a day before Rajesh died and the bond they shared went beyond just professional commitments. Kunchacko or Chackochan (as he is fondly called) and Rajesh shared a very close personal friendship which is why Chackochan’s role in Take Off, made as a tribute to Rajesh, has elicited a fine and mature performance, probably his finest in recent times.

He says, “We have a very long association and are people who have witnessed the highs and lows in our careers and shared a very strong bond.” Musing for a moment, Chackochan continues, “I think he loved me more than I loved him! Rajesh was so warm and loving and I remember when my wife Priya and I met him, he used to say ‘This is my Chackochan, not Priya’s!’ He was so innocent.” But when it came to professional terms, Rajesh was a strict taskmaster who used to elicit the best from his actors even when he was totally unwell during the shoot of his last film Vettah. Chackochan seems to have poured his heart and soul into his role of a male nurse in Take Off and that effort has been lapped up by the audience who have given it huge thumbs up.

Incidentally, this film released on the same date that Chackochan’s hit film Aniyathipravu released 20 years back. Initially, Take Off was not planned to be taken on such a big scale . It was to be directed and released at a fast pace. Mahesh met Chackochan a year back and asked for only about 10 days from his busy schedule and the film was to be wrapped up in 25-30 days and was to be largely shot in Kochi. It was planned as a feel good family entertainer and Chackochan agreed. 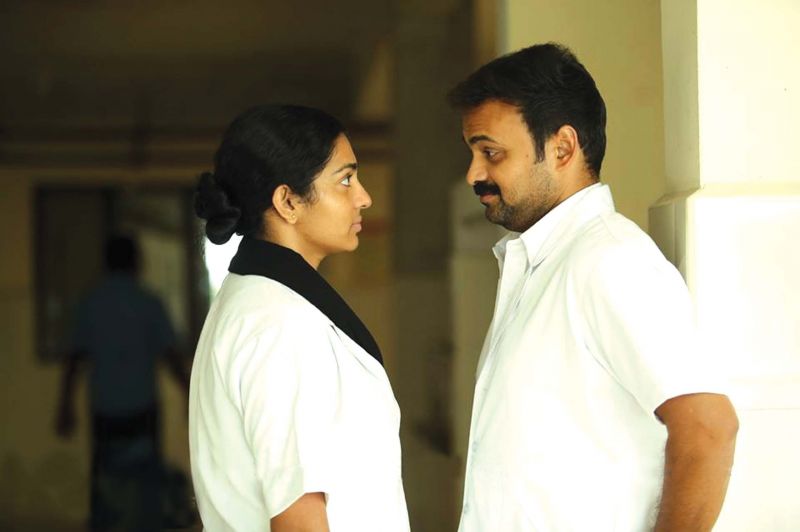 Still from Take Off

He jokes, “I gave Mahesh 10 days from the dates allocated to my wife because it was to be shot in Kochi itself.” Later Mahesh came back for the story narration and suddenly, it became bigger— the story could not be confined to only Kochi and had to be shot abroad. A small family film became a film that spoke of the travails of nurses stranded in Libya under the cruel ISIS rule — culled from real life incidents. Chackochan says, “The scale changed and I only asked Mahesh how many days would be needed and he apologetically said ‘45 days’! It was initially planned as a husband-wife film but then I became a male nurse which I was playing for the first time. When I heard the narration, I got excited because there was substance in the script. I also realised that if Rajesh wanted to make a film, it would be something along these lines.” The cast got bigger too with Parvathy, Asif Ali, Fahadh Faasil and talented technical crew joining in.

Talking about the huge success of the film, Chackochan opines, “The film looks at the trials and tribulations of a large section of society — the nurses who support the economy here and each family in Kerala would have a relative working abroad in the healthcare sector and it has been easy to relate to their situation. This film has been the greatest gift we could give Rajesh.” Professionally, Mahesh had given a very detailed brief which made acting the part of the nurse a breeze. Also Chackochan was not unused to hospitals and nurses as he explains, “My father was bedridden for four years and I have seen my mother take care of him almost like a professional nurse. I have recollected all those years and could blend those experiences into my role with Mahesh’s help.” Though he could not interact with the real life nurses, Chackochan had access to reading and visual material to help him do his homework.

Chackochan’s approach to acting has undergone a sea change as also his selection of roles that strive to be different. He candidly says, “Acting is my life now! Earlier, I had an almost childish approach to cinema, but now things have become very serious.” So serious that he revived the Udaya banner and produced a film himself.  He continues, “I see if the script excites me and also do not stick to just one genre. The business aspect is also important. After doing an intense role, I might do a comic role.” Chackochan is not rigid about acting only in lead roles. He has done character, cameo, antagonist and guest roles. On a serious note, he adds, “Competition is increasing but it adds to fresh making patterns and acting styles that will keep the audience happy.” While on the subject of talented actors, he mentions the efforts his co-actor Parvathy took in drinking litres of water to actually look pregnant.   Ramante Eden Thottam is next on cards where he plays a 40-year-old in addition to a film with Sugeet and other projects.