Cyclone Jawad forms over Bay of Bengal, close to the Vizag coast
Entertainment Mollywood 28 Jul 2019 With no regrets
Entertainment, Mollywood

His was a debut unlike that of other star kids — in silence, without hullaballoo, in a very unlikely fashion that didn’t suit the son of one of the greatest actors of Indian cinema, Bharat Gopy. After Rasikan, in which he debuted as a screenwriter and antagonist, with not many noticing, Murali Gopy disappeared. And then, after five years, he was back, with the revenge thriller Bhramaram, playing Dr Alex Varghese, who stands by his friend in peril, hiding their dark secrets. He kept surprising as the frustrated Ajay Kurien, Left idealist Che Guevara Roy, hot-headed Tyson Alex, nervous Father Michael Plathottathil, lovelorn Sidharth, unscrupulous Mahashay Bhagwan, unpredictable Chellappan and supportive Madhava Das, radiating charisma in each and every frame he occupies. While he scripted, he was celebrated, booed, cheered, trolled and hailed again. Taking it all with grace, he smiles, admitting that he is unapologetic about his creativity and choices.

Someone who is known to not repeat the traits or shades of any of his characters, Murali is all set to play yet another priest (his first was in Kanyaka Talkies) in Kiron Prabhakaran's Thakkol. “Father Maankunnath Paili is a Rector, the head of the ecclesiastical institution, totally different from the character in Kanyaka Talkies. Father Michael Plathottathil and Father Maankunnath Paili are at two ends of the spectrum. Thakkol is an incisive off-beat film set in a Christian milieu and it has a deep Christian message. As someone who enjoys Semitic literature, I was wooed by the premise of the film.”

Thakkol also marks yet another coming together of Murali with his ‘creative brother’ Indrajith. Together they have produced magic in films like Ee Adutha Kalath, Left Right Left and Tiyaan. Asked what the much-celebrated chemistry is all about, Murali says, “We share a creative brotherhood — Prithviraj, Indran and I. I love Indran as an actor, and as a writer, would love to have him in my films. I respect the way he treats his art. And the chemistry just happens; it's not a conscious act.”

It was this creative brotherhood chemistry that resulted in one of the biggest hits in Mollywood, Lucifer, directed by Prithviraj, penned by Murali, led by Mohanlal, with Indrajith playing an important character. No sooner did the film turn a blockbuster than the team announced its sequel Empuraan. The reference of Illuminati, the secret society of world rulers, was soon to evoke conspiracy theory researches, frame-by-frame dissection and trolls. Reacting to it, Murali says, “The reference is there and since this is new for a Malayalam movie, people started doing researches, serious, funny and at times, too much. Now I think many know more about Empuraan than me!” and laughs. 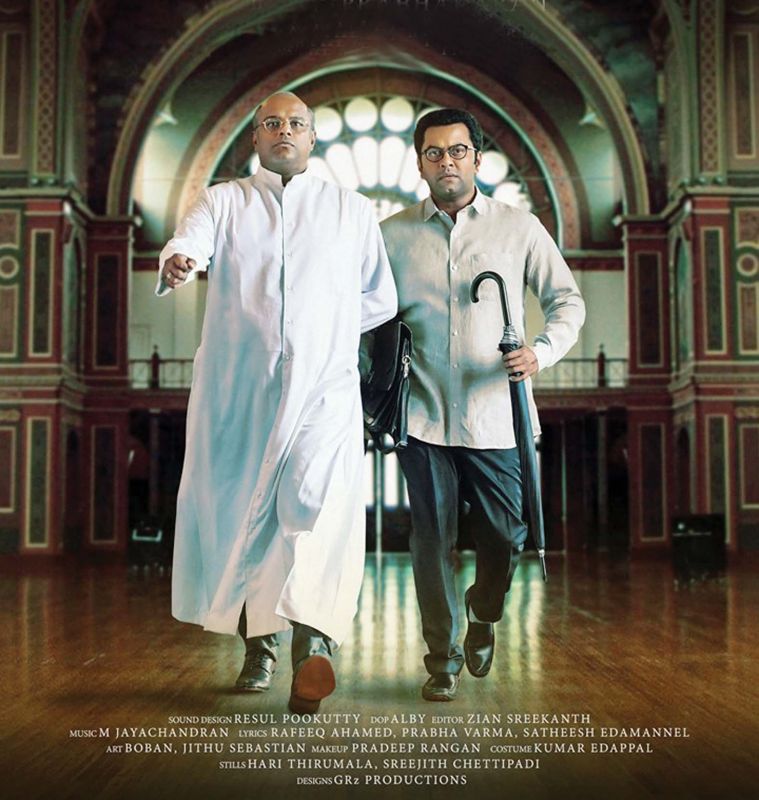 Murali Gopy and Indrajith in Thakkol

However, discourses on his movies, political findings and theories never make the scriptwriter in Murali conscious. “In fact, they make me more relaxed. Hyperscrunity is a problem of the times, a disease. Films should be viewed and then reviewed because great entertainers never reveal themselves at the first frame. You have to wait till the end to gauge the art. Viewing a movie with vested political interest or prejudice builds a smoke-screen between the viewer and the film. Naturally, they can’t enjoy the art. When a person watches a film to review it for likes and comments from peers, it’s a strenuous exercise. The film never permeates that screen between the person and the film. For proper communication with art, philosophy or spirituality, one has to come with a blank slate,” he says.

Murali is well-aware of the criticism that the movies he pens smuggle in ‘hidden Sangh politics’, but he has never cared to respond to it. “I never respond to it because I am not that. This branding happened after Left Right Left by so-called Leftists. I have always stood against Right Wing Extremism and believe that India’s doom stems from it. When you talk against established pseudo-Leftist movements, the first step they resort to is to corner you as a rightwinger just because they can’t take criticisms. I am criticised from left and right for my films, including Tiyaan. I don’t want to prove them wrong; time will. Let them write about it till their pen tires; I leave it to time,” he comments.

He notes that the political din has decreased since Lucifer. This time, it’s about objectification of women, referring to Raftaara, the item dance song in the movie. “This controversy is caused by sheer ignorance. In art, objectification would refer to doing something without the consent of the performer. Calling item dance objectification is undermining the dancers who deserve respect for doing their job, which is like any other.

Vulgarity lies in the beholder’s eye. Calling their work objectification is no feminism; it’s paper feminism,” he adds, stressing that nudity is not to be sanitised in a free society. “Demystify it and tell people that nudity is normal. The idea of censoring is stupid. The forbidden always tempts; ease it up, let it calm down and free India from its simmering sexual urge which causes all violence.”

The Censor Board is what Murali calls ‘the official great dad of all moral policemen’. At a time when creative freedom is at stake and any little word tends to hurt sentiments and incite violence, he notes that the biggest threat the country faces is that there’s no Left wing. “Let’s get the facts right. Left behaves like Right wing and what we are actually facing is extreme Right wing invasion by so-called Left and Right, State and Centre.

Whoever feels that creativity incites violence is stupid and ignorant. If films can influence people, why aren’t all those who have watched Gandhi Mahatmas? The historical truth is that after the advent of cinema, violence has decreased. See, no world wars or mutinies were caused by films. There’s no point in blaming cinema for everything.”

A former journalist, Murali has never shied away from airing his views on matters of social impact. When the MeToo movement shook the global entertainment industry, the ripples of which could be felt home in Malayalam too, many publicly announced their refusal to work with the artistes accused of sexual misconduct. Murali, however, considers it unfair. “The movement is very crucial and attempts to debase it shouldn’t be encouraged. Having said that, I believe that any movement can be responsibly explored or irresponsibly derailed. So, till proven guilty, both the accused and the one who alleges need to be treated equally; no one has to be shunned. Both deserve decency. It’s sadism which takes the lead when people attack the accused to see him down and reel in pain,” he says, adding that like all waves, MeToo might be silently hijacked by invisible arms of patriarchy unless it is handled responsibly.

Back to movies, he is glad that the Indian film industry is passing through a great creative phase. “With films exploring various genres, I can see this as a stride towards a genre-conscious, healthy industry. This merger of the cinematic and realism is a phase. This was there in the 80s, Achan’s time, when films like Yavanika, Ormakkay, Rachana and Panchavadippalam were made. It ended and then came back and again disappeared. This will keep phasing. I find it healthy when everyone can do their work in multiple genres. I, for one, have my hands on multiple genres.”

The overwhelming reception to the latest movies that address sexism, toxic masculinity and body shaming too, he feels, should work at an awareness level and not like airdropped goodness. “Patriarchy is deep-rooted. It relaxes at times and then grows stronger. Isms should not be something that die when technology fails. Pseudo-isms will end the moment satellite gravity shifts and mobile phones fail. Start from home. Home is not family, but the heart — the home where we hide all our secrets. Start there.”

Murali is very excited about the role OTT platforms like Netflix and Amazon Prime play in fearlessly exploring creative freedom. “OTT is the greatest gift of the time. That’s where brave political criticisms happen against Right wing governments. It elevates general consciousness and helps fight extremism. Malayalam is yet to venture into it, but given the chance, I would love to write for OTT. I’ve got the feelers too. But it’s not yet time for Malayalam."

Right now, he is waiting for Thakkol and writing for Kammara Sambhavam director Ratheesh Ambat. Then, he will move on to scripting Empuraan, after which he has two more acting assignments coming up. A short story collection — his second — is to be released soon.

An actor with 15 years in the industry and hardly 25 films to his credit, Murali doesn’t mind the gap while waiting for challenging characters. “I don’t multitask. I either write or act. I did Kaattu and Aami at the same time. And that I am able to strike a difference is my high in acting.”

Is his father his greatest influence? “Inspiration,” he corrects. “Achan is my greatest inspiration among many others. I have no influences. A creative person, I believe, should not.”