No compromise on creative freedom

Some of the strangest fairy tales aren’t fiction. The real-life stories behind the struggles of filmmaking are sometimes more interesting than the actual film.

Award-winning director Salim Ahmed’s And The Oscar Goes To showcased the struggles he had to face while making his first movie, which got us thinking about stories behind other movies. The Malayalam film industry is going through a period where aspiring filmmakers need to be prepared to work hard or they should try something else. There are a lot of them now.  For many, it’s not going to be all fun and parties. Salim made his directorial debut through Adaminte Makan Abu and it was one of the prime examples of those directors who succeeded in filmmaking by overcoming too many hurdles. Now, through And the Oscar Goes To, which depicts his own journey in the tinsel town, Salim is cementing his place in the industry as well.

Responding to the question on his reaction seeing his life struggles on the big screen, Salim says, “I cannot claim that the movie is fully based on my life. A part of my life is shown in it and more than depicting my life, I am happy that it could be the first movie to have been directed by the person whose struggles are chronicled in it.” Salim points out that since the release of the movie, many of his friends, especially some of the successful directors, talked to him for they could relate the story with their own experiences too. 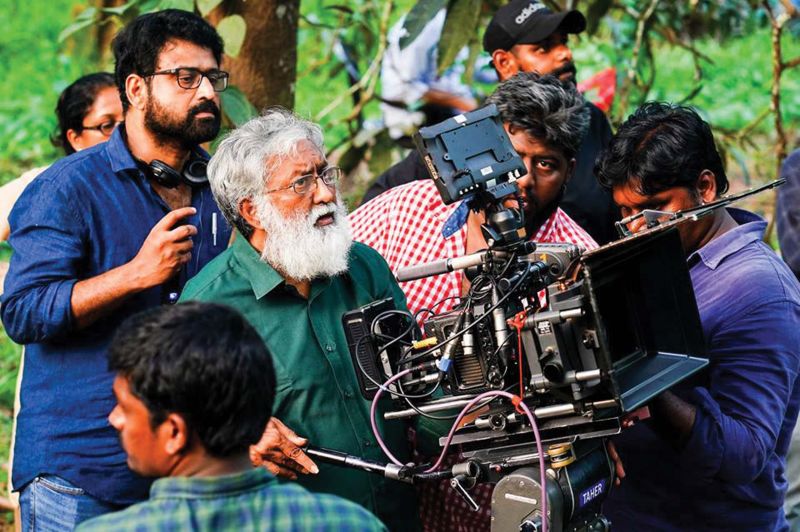 “Basically, the movie is about filmmaking and how the end product goes on to become a success or failure. I believe most of the directors or actors during the beginning of their journey have had these struggles or hurdles in front of them, and they could relate to And The Oscar…, which I consider as a plus.”

The Kannur-based director is no stranger to awards and recognition. Through his life and not by the film, he shows how tough a competitor he is when it comes to cinema. For Salim, directing movies is one way of expressing his views and ideologies to the outer world. And he is not ready to compromise by tweaking or molding his stories for anyone’s interest. As he believes in working in freedom, he produced all his four movies. “I believe in creative freedom and I value it a lot. I cannot stand compromising freedom for anything. One of the main reasons why I produced all my movies is to make sure my freedom is not curbed.”

Every year, around the time the Oscar nominations are announced, there is a collective hullabaloo about India’s tryst with the world’s most famous film awards. On the one hand, for better or for worse, an Oscar nomination has been elevated to a hallowed position and on the other, every year there is some controversy or the other regarding the film officially picked to represent India.

When Salim’s Adaminte Makan Abu was selected for Oscar entrée, it was not the controversy that took the movie on headlines. The topic of discussion was how a small movie from Kerala made its way to the Oscars.

Salim, as showed in And The Oscar…, went to LA for promoting the movie like the fictional character Isaak did, but would fail to get into the last set of nominations. A person who’s been to the Hollywood with his movie, Salim says Indian films fail to do proper marketing before the gala. “Indian films, especially those which usually don’t get listed in the final nominations, fail to cope with the marketing others do. For us, as shown in the movie, we have to do proper marketing techniques like publishing it on American media, spend money, and invite people for the screening. The fact of the matter remains that we simply pick up a film that best represents the cinema of the country, which is how the Academy views official submissions, and it is not enough. For one, it doesn’t make any difference to the approach the average Academy member would have towards the film. But for other movies competing in the Best Foreign Film category, they have the luxury in some other ways. Most of the other movies would have already won or at least competed in prestigious events like The Golden Globe, Cannes, etc. They get indirect marketing via that. So, it gives them an edge that we don’t have usually,” he explains why Indian films make the cut at the Oscars.

After Adaminte Makan Abu he made two movies Kunjananthante Kada (2013) and Pathemari (2015) with Mammootty as the lead.

He also has some familiar faces and backdrop going on all his movies. When asked about if it, Salim says, “Every director’s dream would be doing great projects and for that, he always needs factors like great chemistry with the actors and the script, the backdrop where the story happens, etc. I have been working with a set of actors and crew members since my first film because I am very confident and comfortable with them. Eventually, all that matters is the result. But, I have worked with other faces too. Tovino Thomas is one of the new companions I got from this movie. Casting him had a specific reason though. Like my own life story, Tovino too had to struggle at first. He could relate the story a lot. He was the right choice for the movie.”

Salim is currently working on a new project and he promises there won’t be a long gap that he usually takes before starting a new project.

Salim Ahmed never expected Oscar grandeur. “I never expected winning Oscar for Abu.” For him, the perfect ‘Oscar’ would be the acceptance and appreciations for his movies from the public. In that way, he is a worthy winner.