She’s endearingly beautiful, but she’s not just another nice-looking face that graces the big screen. She’s known for her unconventionality — whether it’s her roles, her style or her physical appearance. Actress Nithya Menen, who’s well-known in the South for her fine acting, is delighted to have made her Bollywood debut in Mission Mangal. Having played Varsha Pillai in the film that’s grossed over Rs 100 crore, she is a picture of glee. “I’m very happy that Mission Mangal’s getting good reviews — the fact that it’s connecting with people is very important,” says the actress, who’s known for playing some strong characters in the South.

“When Balki approached me and said the movie is about India’s Mars mission, it was intriguing for me as, in our country, we don’t make too many films about our space achievements. Balki was very familiar with my work and so was the director Jagan, who’s Kannadiga. I wanted to make sure that they knew why they wanted me in the film. I’ve always been choosy with my South films, so I wanted to make sure they knew I wasn’t just another South Indian actress trying to make it in Bollywood,” she smiles.

From OK Kanmani to Ala Modalaindi, Nithya’s always picked characters with substance. How does she go about choosing her roles? “There’s no framework or guideline. I hear it and connect with it, and I say ‘okay’. 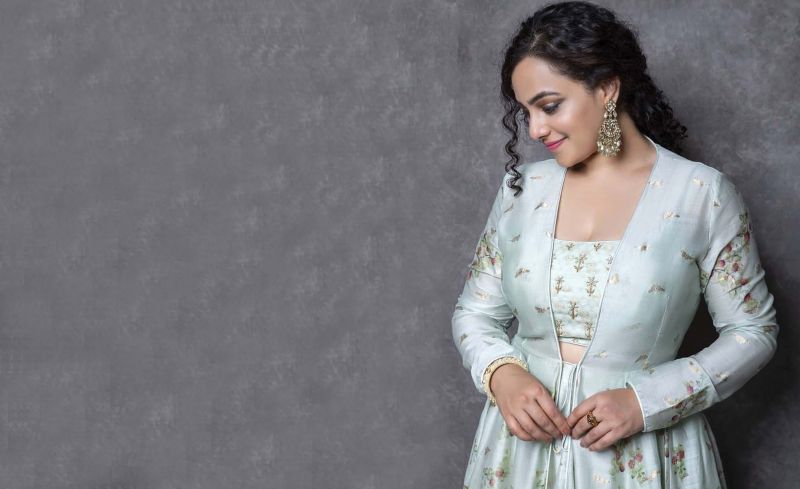 It’s not a strategy. I see who the director is and whether this person will be able to make the film well. I look at the sensibility more than anything, even if the filmmaker is new, it doesn’t matter to me,” she states. Ask her if she and actress Vidya Balan connected over their South Indian connection and she instantly laughs, “Yes! We connected the most. She was absolutely wonderful. I didn’t expect the whole environment to be that easy.

Despite Akshay and Vidya being big stars, there were no tantrums or starry behaviour. The two were so normal and protective of me. Vidya would come and tell me that I looked lovely and pinch my cheeks — she was very fond of me. I felt taken care of and protected,” she reminisces.

On the cinematic front, the actor is looking forward to her Malayalam film Kolaambi, which she’s incredibly happy with. “It’s a beautiful and human story, and it’s honestly, my most favourite film. It’s my kind of genre and has been done in an intimate way,” reveals Nithya. The artiste also has the Malayalam movie Aaram Thirukalpana and the Amazon original Breathe 2 in her kitty, post which she will be doing a Telugu film, which is centred around a mother and a daughter. Since the beginning of her career, the actress has always been known to be unusually striking — whether it’s her roles or for being someone who doesn’t fit the typical body type that actresses are expected to have. “I didn’t make an effort to break stereotypes. If you just go ahead and be yourself, you will automatically break them. Everybody is trying to align to one thing, but I cannot do that. I’m very spontaneous and natural, so I went ahead and did what my soul guided me towards.

Doing what somebody else was doing didn’t seem like the intelligent thing to do,” says the actress.

Not many are aware that Nithya hails from Bengaluru city and she wants to make sure that everyone knows she’s a Bengalurean. “Even my Wikipedia page says my hometown is Kozhikode! No matter how many times I say it, people don’t seem to know that Bengaluru is my hometown. I come here every chance I get. I love my house — it’s very green and has a lawn. This is where I come to centre myself and rejuvenate. No place is as pleasant as this city,” says Nithya.

Ajay Devgn is back at work