On the stage a champ she is

Her energy is contagious while she is on stage, handling a crowd. Stage shows and events have always been anchor and actor Sreeya Iyer’s forte, and it was the immense love towards her career and strong will to overcome the low phase that persuaded her to opt for a healthy lifestyle. When Sreeya discovered that the high dose of medication that she was introduced to as part of the treatment for certain ailments is taking a toll on her health, rather than feeling depressed about her body going out of shape and thinking about the adverse effects that exercise can have on her already weak cardiovascular capacity, this Thiruvananthapuram native decided to hit the gym. And it marked the making of a champion. It was not the urge to slim down in a fast pace that made her lift heavy weights, but as Sreeya puts it, “It just happened, as and when I started weight training, I would seamlessly lift weights that men would only attempt to.”

Seeing her capacity, her trainers insisted that she took it up seriously and Sreeya too felt the need to break the monotony. She wanted to test her limits as well. 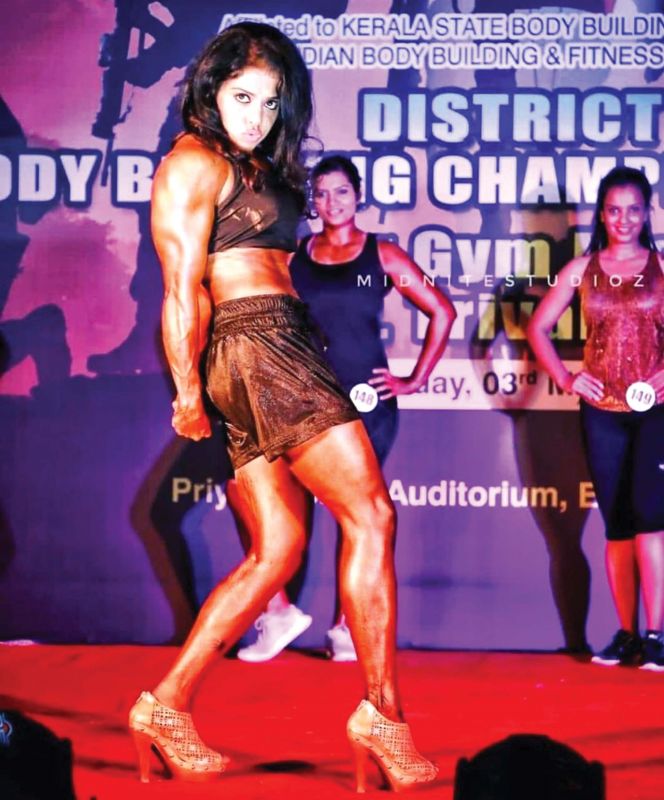 Sreeya during a body building championship

However, she was confident that she would emerge successful. Five years of rigorous training and two years of attending competitions have given her a number of accolades, Miss Kerala Physique 2018 and Miss Trivandrum Physique 2018-19 being the most important ones. Sreeya is training hard to compete at the national level this year. She is also a certified Zumba instructor and has a clientele of women, who get effective tips from her regarding weight loss after pregnancy, how to manage various health issues associated with PCOS and other lifestyle issues that they feel comfortable discussing with a female instructor who has professional knowledge about the subject. 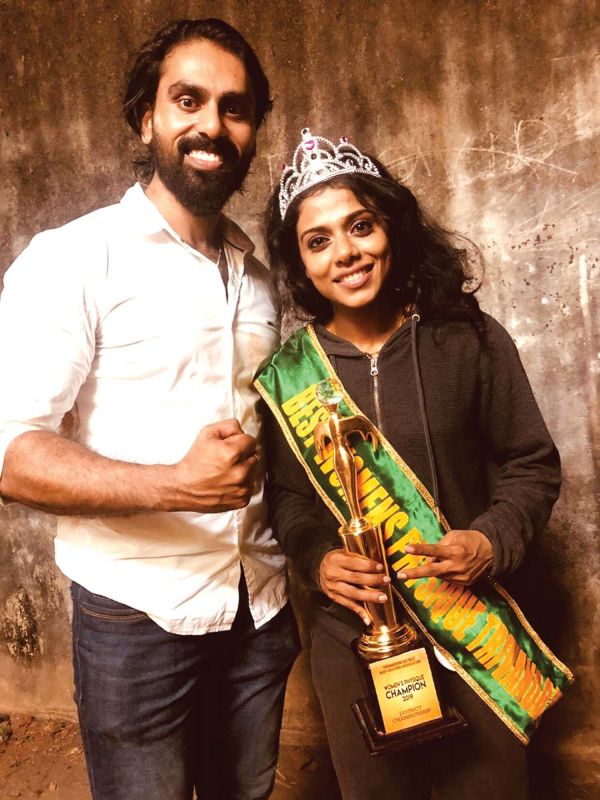 Sreeya with her mentor Anandh Xavier

Asked what her real intention was when she decided to step into body building, Sreeya says, “Initially, I just wanted to keep myself busy and get out of that zone which was driving me into negativity. I also wanted to shed those extra kilos and have a fit body as I thought I needed to be in shape while hosting stage shows and events. I am particular about this because I feel that as an anchor, I can do my job tension-free only if I feel confident and good about my body, which for me is when I am in good shape, and don’t feel uncomfortable in any attire I am required to wear for the shows. However, my trainer realised that I could do more than just exercise and therefore encouraged me to get trained under a professional instructor who would guide me through this and finally make me competition ready. I was so happy to go with the flow that body building and lifting weights started to become like meditation for me. The training sessions under my mentor Anandh Xavier gave me insights into the world of women physique, which was much more complicated than I had imagined. However, it felt quite interesting for me and I decided to give it a try.”

However, getting into competitions was not an easy task for her as she belongs to a typical orthodox Iyer family and had been a vegetarian all her life until she had to get into a different regime and dietary habits for making a body competition ready. “I would say that his/her diet decides how he or she looks for the competition. 70 percent of the job is done if you follow the correct diet. It was extremely difficult in the beginning for the foodie that I am. However, I slowly started getting on the track and have stayed by sipping just a few drops of water on the day of competition,” adds Sreeya.

Sreeya agrees that the misconceptions associated with women and body building are one of the reasons why women are not attempting it. She adds that people, who do not have technical knowledge about the negative and positive effects of body building, are spreading rumors and women fall prey to them. “Women can never have bulky muscles as those of men simply because the hormonal specifications of a man and a woman are different. Though there are means to build bulky muscles like the ones men have, it is not usually practised in our country. Women mostly look forward to three body types –bikini physique, women physique and body building, which requires one to have bulky muscles and is opted by very few. Therefore, it is completely safe for women to lift weights. The more you lift weight the more toned your body looks,” says Sreeya.

“The bitter truth is that women physique is still not accepted by the public in Kerala at large,” she adds. It refrained her from posting her competition photographs on social media. “While posing in a body-building competition, we as participants have to meet certain guidelines. But such photographs might not be acceptable for the public. Especially women posing at a body building competition is still very alien to them. But I was surprised when one of my photographs surfaced in the social media and received numerous positive comments. I was congratulated by many even celebrities for having won the titles in a not-so-common field. I am glad that people are appreciating my effort and therefore my actual aim to represent modern daywomen who are strong enough to face any challenge is finally seeing the light of the day. I also want to represent our state on a national platform ,” she observes.

She is actively involved in propagating among kids the benefits of going to the gym and organises various summer camps where children are taught to inculcate healthy lifestyle. “I even talk to the parents and tell them the necessity of developing healthy habits among their kids. I ask them to send their kids to the gym when they are not doing anything or playing games on their smartphones. Children, too, can feel lonely at times as nowadays they have very less friends. Going to a health club and exercising is definitely a healthy way out to tackle such problems,” she concludes.