“Tony and Tania – I am both,” says the voice on the other side of the phone. Speaking from Bengaluru, he spoke in a frank and fearless tone. Frank because it took him 20 years of denial to finally come out before the world to announce his sexual orientation as a gay person. Fearless because he enjoys ample support from his family, colleagues, friends, queer peers and the church. A senior tech lead at Infosys, Bengaluru, coming out hasn’t been easy for 33-year-old Malayali Tony Christopher. “I was breaking two decades of silence. It took time even for me to come to terms with my sexual orientation. First, like many others, I was the victim of the misconception that homosexual feelings were a result of sexual abuse as a child. I was living in guilt and pain for years,” he recalls.

A person with feminine traits since childhood, Tony was raised in a conventional Catholic family in Kollam. “I hail from a strictly religious middle class family, which has been into the textile business. Even as a child, I have enjoyed secretly dressing up in mummy’s sari and putting on her makeup. In school, I was teased for my girlish mannerisms. At family functions, I was ‘advised’ to behave like a boy. My parents and relatives constantly tried to ‘correct’ me,” he remembers. Once, during a family function, an elder commented that now all the cousins are there, there were five boys and five girls. “One girl was me. It hurt me so much to be made fun of. Another day, on the eve of a wedding in the family, when all boys danced to Mukkala Mukkabla..., I danced to Nimbooda Nimbooda... My parents and elders were embarrassed as everyone was laughing. I felt good dancing, but the response hurt,” says Tony. 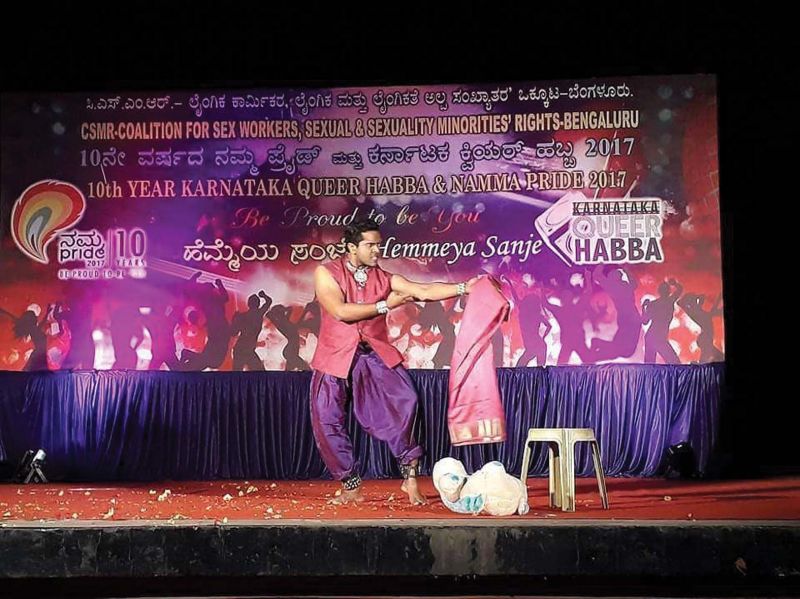 Later, when he moved to Mumbai as a techie, he came in contact with queer support groups, NGOs and events related to gay pride. “It was a revelation to me that there are homosexuals who have not gone through childhood abuse. Mumbai opened new avenues for me — of modelling, of making acquaintances. But once a person I declined to date started putting my pictures and details on the internet as a homosexual person. I was scared thinking it would affect my life or career or someone would file a case against me under Section 377.” Unable to take it all, Tony left for Bengaluru and took a sabbatical from his true identity and tried ‘cleansing’ and ‘curing’ himself as per the advice of religious counsellors and priests. “For the next seven years, I stayed out of NGOs, queer support groups and activities. I tried brainwashing myself.

“Iconfessed all my sins, even if I watched videos with sexual content. I lost confidence and fell into depression,” says Tony, who finally realised that he couldn’t do it anymore. “I started opening up, first to my mother, then dad, friends and extended family. There was lot of resistance initially and everyone was in shock. For a few months, I stayed away from family.  Surprisingly, a few relatives and young cousins talked to them and made them aware that I couldn’t be treated for my sexual orientation,” he says. Tony’s parents were quick to accept him. “Parents are worried only about our future. Most parents of homosexuals are in denial mode because they don’t want their kids to be discriminated against. My mummy is still worried thinking I’d be hurt, lose my job, or someone would slap false charges on me.”

However, the most surprising response came from his parish. “I am a religious person who goes to church regularly. When I talk to many priests confidently about my orientation, all they said was ‘lead a good life’. No one would force me out of my parish. The Bishops’ Conference maintains that homosexual people should be shown compassion. I’m glad that the church is slowly accepting us. Church congregations hold conferences to understand homosexuality. In these meets, attended by even Catholic representatives, they talk to homosexual persons to understand them. It’s a slow but steady process of inclusion,” says a hopeful Tony.

Careerwise, sexuality hasn’t stood on his way. “But it is not the same for everyone. There are a few bosses who think that if we do not live according to social norms, it can affect our career, though Western countries are very welcoming of talent irrespective of sexual and gender identities. My company has a queer support group and I can raise a complaint if I face any harassment. But we always live in constant fear if people don’t openly acknowledge us. I have no way of knowing if I’m being discriminated against – why I am denied a raise or a promotion. It’d be great if everyone shows that they accept us.”

However, there have been unwelcome sexual approaches too. “Just two months ago, I was groped in the green room by a person who came to congratulate me after a dance performance. Even at 33, I am living under threat. There are thousands of members in our community groups, but only a handful has admitted it in the open because of the stigma and the law.”  Vocal against Section 377, which criminalises homosexuality, Tony has been speaking and writing about it a lot. “Even if a man is raped, a case can be registered only under this Section, which makes both the culprit and the victim – including minors – criminals. And they are all punished in an inhumane manner. The jail term is more than what rapists get,” he adds.

Tony strongly advocates for an amendment to Section 377. “It’s an archaic colonial law scrapped in most of the nations. Religious and political pressures are preventing scrapping of the draconian law here. But the Supreme Court has to think only about human rights so that we no longer have to live in fear.” He is yet to decide on choosing his identity between Tony and Tania. He explains, “I am in a gender dysphoria stage. I have a feminine side and I am still undergoing a psychological analysis. I am yet to decide about carrying myself like this, or undergoing sexual reassignment surgery. I am really scared of it because transgender persons are attacked, raped and murdered more than rest of the community members.” But one thing he is sure about is that it is time to settle down.

“It’s time to start a family. I need to find a partner, get married and adopt a child. I am an only child and my parents are worried about my future. But since India doesn't have a favourable situation, I might consider moving to Canada or Australia. However, I would love to stay in my country with my parents and take care of them. If the Supreme Court takes a favourable decision, I might find a suitable boy and can live in my country, working for my people and live happily ever after,” he concludes.