Ever since the gorgeous Sunny Leone announced the heartening news that she would be debuting in Mollywood with the film Rangeela, there had been a lot of curiosity regarding her male co-stars. Putting all speculations to rest, Tamil/Malayalam actor Krissh Menon has been cast opposite her. Krissh made his mark in Mollywood through the Sugeeth directorial Kinavally last year. He also debuted in Tamil with Yennai Arindhaal directed by Gautham Menon starring Ajith. He went on to play one of the antagonists in Achcham Yenbadhu Madamaiyada, also directed by Gautham Menon, and was recently part of a Tamil web series.

It has indeed been manna from heaven for the actor, who is just kick-starting his career.  It was Kinavally that gave him the lucky break. “Director Santhosh saw my performance in Kinavally and he called me asking if I would be interested in a role in Rangeela. This happened in mid-January and like everybody else, I too was aware of Sunny Leone’s involvement in the film. What was there for me to say no to the role?” he asks continuing, “ It is a plum role, a great opportunity and I was being directed by an experienced director who already has two projects under his belt. So, I grabbed the opportunity with both hands,” he elaborates. He is playing the male lead in the film.

The actor began shooting his portions with Sunny in February and has finished the Goa schedule. Rangeela is a road movie and the locations are Goa, Kochi, Hampi etc. Krissh, though reluctant to reveal details of his role, adds, “It is a light-hearted film which any family can watch.” 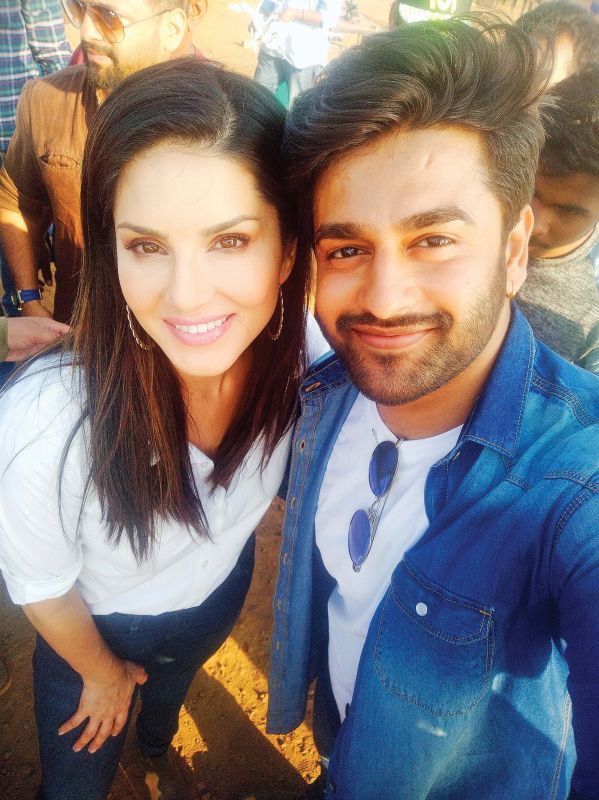 So, how was working with the very popular Sunny up close and personal? “Obviously, she is a huge star and a huge sensation. I was intimidated by her stardom. But right from the day my director introduced me to her and her team, I realised she is extremely down to earth. She made sure that I was very comfortable and we used to have these conversations,” he cannot stop gushing and with good reason. “She is a very beautiful person with not only gorgeous looks, but a very good soul, too.”

Krissh adds that the way Sunny conducted herself and her manner of speaking won him over. “If I admired Sunny earlier, after interacting and working with her, I now have the utmost amount of respect and admiration for what she is! Finally, you see a person who is beautiful inside and out.” The family person that he is, Krissh found another quality in Sunny that endeared her to him. “She is a very dedicated mother, too. I have seen firsthand how she takes care of her kids and that is so beautiful to watch!” Looks like Sunny has added one more fan to her ever growing list.

Krissh has been hearing other scripts, but does not want to reveal too much till they come through. He quips, “The other day, a Tamil director who had considered me for a role called me and expressed his apprehensions that I was too big for him now. I was like ‘I need work,” he laughs.

Krissh had set his sights on becoming an actor ever since he saw the legendary Rajinikanth act in Basha. “I was four then, but I knew right away that acting was what I wanted to do. So I took part in plays and even did my graduation in filmmaking and advertising and post-graduation in filmmaking, post production and special effects,” he recalls, mentioning that his family was always supportive and never discouraged him, given their own love for films. “In fact, my family members watch more films than I do!” he says.

The film-loving family had only one demand — Krissh must make a success of himself since tinsel town is notorious for its high failure rate. In between Krissh even did a couple of well paying jobs. “Those jobs never gave me any creative satisfaction. I stayed awake at nights because I knew an actor was what I wanted to be!” That was the time when Gautham Menon gave Krissh his break.

Incidentally, Krissh had to wait for six months for Rangeela after Kinavally, and it was not for lack of offers. He explains, “When I sign a film, my only priority at this stage of my career is an able director. A good director can hone an actor under his/her tutelage and my job as an actor becomes easier.”