DECCAN CHRONICLE. | MEERA MANU
Published Aug 15, 2016, 12:00 am IST
Updated Aug 26, 2016, 11:51 am IST
Facebook videos are turning out to be platforms that offer celebrities a chance to communicate social issues in an effective manner

We clapped for their valour, wept at their heartbreaks. We loved and at times, grew angry with their histrionics on big screen. However, if a star celebrity says ‘do this’, many of us are prone to listen and replicate. Or lend an ear to what they have to say at least. The celebrities over the course of time, seem to be growing more concerned about social issues, courtesy their social media pages and handles.

Beyond personal endorsement, their social media platforms are becoming agents of change. If FB scribbles and Twittersphere were the primitive forms of expressing celebrity opinions, their very dearest medium, video, of cutting-edge tech is celebrity BFFs these days to converse with mass audience for social good.

The best we expect when a celebrity goes live on FB is a chit chat or nosey-parker updates.  When Aashiq Abu went live on Facebook four days ago, the topic was nowhere related to cinema. His was a warning bell on an alarming issue, drinking water contamination of Periyar, which puts the lives of 40 lakh Kochiites at risk. He roped in an expert researcher Martin, who dug into the factuality of river pollution resulting out of the ejection of industry effluents in a presentation. 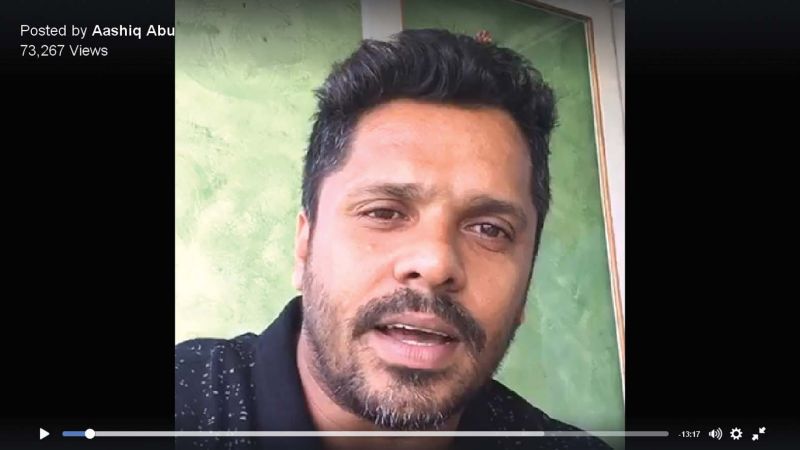 A screenshot from Aashique Abu’s video

“River water contamination makes way to headlines almost every day. I happened to watch the video by Martin and was shocked by the gravity of the issue. Going live on FB with him was totally unplanned until the day before doing it. The thing is, if we go into the details and post a lengthy note, very few will show the patience to read it till the end. A video, on the same hand is more communicative and people tend to sit down and see what it is,” explains Aashiq. The video went viral amassing more than 20K views.

As if an upshot of the video, today, the residents of Ernakulam are taking out to the street at High Court Junction for the ‘Save Periyar’ campaign'.   Actor Jayasurya's social responsibility needs no introduction and the actor may roll up his sleeves and seal the potholes on roads all by himself to walk the talk. If there is anything that hurts him badly, it is the gruesome sight of blood spill on to streets. While he was ready to hit the marquee with two simultaneous releases — IDI and Pretham — that Jayasurya posted a Facebook video a week ago, a plea to the Chief Minister to repair poor roads.

He mentions in the video, how on that same day itself, a pothole broke the hand of a motorist young man. “Social media is a vibrant space checked in by millions. I believe in taking things to the masses through such an active space rather than thinking of promoting ourselves only,” reasons Jayasurya. Similarly, a month ago, he posted another video, a piece of advice to parents to stop comparing their kids to others and let them learn from the mistakes of past and move on.

Two years down the lane, if we remember there was a massive ecological awakening, the ‘My Tree Challenge’ kicked off by Mammootty. It was a campaign of environmentalists Abdul Manaf and Imthias Kadeer inspired by the ALS Ice Bucket Challenge. The online eco-revolution, as it was termed, was a challenge passed on from one celebrity after the other and M-Town’s who’s who were seen in a planting spree then. In 2014, the social media was raining with the celebrity click of the challenge, but Aparna Gopinath captured every detail of her participation in a Facebook video.

“Honestly I took on the ‘My Tree Challenge’ because it was my last nudge. It so happened that my aunt let me plant a tree in her backyard and since I don’t have place around my house to do so. I was quite excited to be part of that. It was my first tree. At that moment, it felt like the best thing to do. I didn’t really look at how much of an impact it made. I haven’t seen so personally but I am sure there may be many who do and don’t really put it up on their Facebook to show the world,” says Aparna.

Will do a Bollywood movie if the character demands an actor like me: Tovino Thomas