“Ellarkkum namaskaram, valare adhiyam santosham undu ningalude koode samsarikyan,” began Vijay Deverakonda in his by now famous drawl which was drowned in a thunderous applause. Soon, he had all those assembled at a press meet for his upcoming film Dear Comrade eating out of his hands, thanks to his dry wit, easy camaraderie, and frank and disarming words. Accompanying him was his co-star Rashmika Mandanna. No wonder Vijay has managed to charm an entire nation through his on-screen and off-screen persona. Dressed in a cream shirt and pant with white sneakers and with his wild mop of hair and beard, the actor was quick to laugh and crack jokes – a far cry from his intense Arjun Reddy persona. Here is news for all those missing the angry young man and the passionate lover of Arjun Reddy — Vijay’s Dear Comrade will bring back his anger and passion back to the marquee.

Vijay plays the character of a short-tempered student leader called Bobby and Rashmika, his neighbor Lily, who is a state cricket player and a contrast to his character.  Asked if Vijay himself was part of any student politics, he negates and says that he spent a large part of his education in a gurukul kind of a spiritual, hostel atmosphere. “It was only when I came to Hyderabad for my higher education that I saw student activists for the first time. I was so fascinated by them, who felt they had a purpose; but I was never a part of any college politics,” he replies.

The shoot of Dear Comrade was held in Wagamon for 10 days and Vijay really enjoyed the time he spent in Kerala. “After returning to Hyderabad, my staff and team kept calling me chetta, chetta! The moment I get off the flight in Kochi, all I see are happy, warm, smiling faces.” A sentiment echoed by Rashmika, who interjects that she has a lot of Malayali neighbours and was pleased as punch to see so many happy people in the state.

Vijay reveals that his introductory words at the press meet were taught to him by his Malayali cinematographer and editor Sujith Sarang and Sreejith Sarang, and that he finds Malayalam to be very lyrical. “My cinematographer got married recently and when I hear him asking his wife enthokke undu vishesham, I must confess I do not understand much of what he says, but I listen since Malayalam sounds so nice to hear,” he naughtily says. 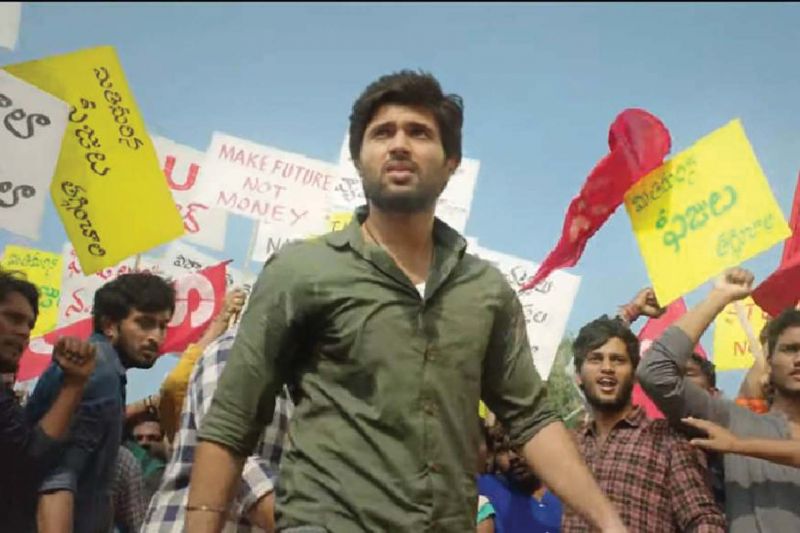 A still from Dear Comrade

Vijay has ventured into Tamil with NOTA. So can we expect to see him in a Malayalam film soon? With his disarming frankness, he answers that he has always wanted his films to be seen by people across regions. One way to do that is by acting in regional films. “When I did NOTA, I did not understand Tamil and had to learn the language. That was really hard.

I believe when I am acting, I should not be thinking about the words, but should be reacting! I do not enjoy the process then! So the only thing that is stopping me from attempting a Malayalam film is my lack of command over the language.

Once I get a hang of the language, even that obstacle can be done away with,” he informs. He has been hearing stories from Malayali directors, he mentions.

The imp in him surfaces when he divulges, “My friends have advised me to get a Malayali girlfriend to learn the language, but I don’t know if that is advisable.

Malayali women are so pretty but I don’t think I should be using that short-cut to learn a language!”

Rashmika, on the other hand, says that she is very open to acting in a Malayalam film and that she loves working in other languages and experiencing new cultures. “When I acted in Telugu films, I did not know a word of Telugu but now I understand the language. So, if anyone wants to approach me for a Malayalam film, I am open to it.”

Since Vijay began acting in 2011, there has been nobody who can accuse him of being typecast. Each film that Vijay has chosen is different — be it the genre or his role. It has to be asked: Is content important or the commercial aspect of a film? No hesitation there. “I think commercial films can also be content driven.

Frankly, I do not understand categories —what I aim is to accept projects that I like and make it commercially viable. Dear Comrade has a very strong theme about fighting for what we love, but it is a story that will work commercially. There is no deep calculation about how I choose a project; the story should appeal to me, I should be able to see it play out and most importantly, I should be happy to act my part.”

Not many know that Vijay started out in theatre much before he became a film actor. The journey has had its crests and troughs. He candidly informs that the journey to stardom needed to be kick-started. “There are speed-breakers sometimes and at other times smooth roads where you can drive really fast. To start off was the hardest part, but once I found that road, I have been moving along pretty fast. Doing theatre, trying to break into cinema, doing roles and then not getting work for a long time — all these taught me a lot!” His film Pelli Choopulu gave him the much-needed break and there has been no looking back since then. Vijay reveals, “Sometimes when I look back, it almost seems scary how far I have come and how fast the journey has been.”

Considering the hard work that Vijay puts in, it is only natural that the fruits follow aided by Lady Luck. A recent tweet by him hinting at a surprise in store with Dulquer Salman’s name thrown in has raised curiosity levels and he is not ready to let the cat out of the bag. “Wait for 10 more days,” he informs. “Dulquer has been a brother to me and is a sweetheart to the core! I was in France shooting for a film when I called him up with a request and he replied with, ‘You shoot, it’s ok! I will take care of it!’  Whatever is coming, I can assure you it is hot!” he teases.

Incidentally, Vijay and Dulquer acted together in the bilingual film Mahanati and have kept in touch since. Vijay admits that he has been a Dulquer fan for a long time and that he has watched almost all of Dulquer’s films with subtitles. “When I realised I would be acting with him, I told him that till then, I had been watching him on a lap top with subtitles.”

This is Rashmika’s second outing with Vijay after the super-hit Geetha Govindam and she says that it has been an amazing experience. The off-screen comfort level is apparent in the jabs and teasing banter that they indulge in. “Getting to work with him in two films has changed the way I think about films. I have seen the way Vijay works and it has been inspiring! I wish to work with him again.” To which Vijay answers that she can when Rashmika finishes her projects with all the leading stars in the south. Vijay is referring to actors like Mahesh Babu, Karthi etc. and so the banter continues.