Mohanlal's own 'Drishyam' at 75 crores had been the previous highest grosser.

Mumbai: He's amongst the best in the country, he's 56 and when one might have settled to think there's nothing left for him to do, he pulls up a Pulimurugan.

Mohanlal's highly anticipated and immensely delayed Pulimurugan set the cash registers on fire, so much so that, a month after its release, the film is still running to packed houses across the state.

And now, the film has done what once must have seemed unachievable by grossing over rupees hundred crores globally, within 34 days of its release. By doing so, the Vyshakh directorial became the first Malayalam film to enter the coveted 100-crore club. This comes just a few days after it displaced Mohanlal's own 'Drishyam' as the highest grossing Malayalam film of all time.

Mohanlal, who shocked everyone with his phenomenal action, plays a village hunter who kills aggressive tigers with a vengeance, in the film. The film, made at a budget of 25 crore rupees, had action choreography done by Hollywood veteran Peter Hein. Mohanlal, reportedly did all his stunts himself, even the ones with the tiger. 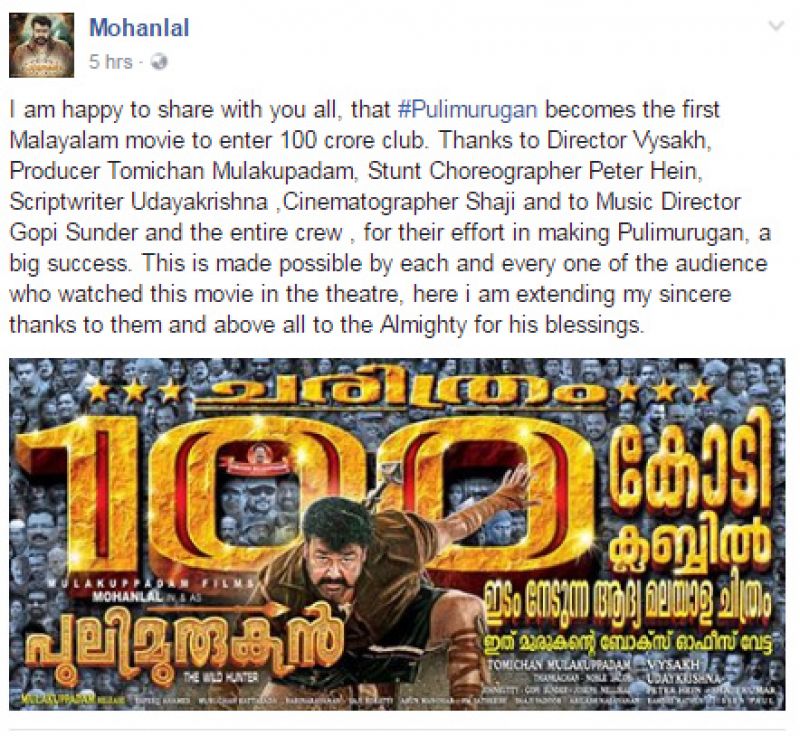 Well, with nothing left to conquer for the two time national award winning actor, it's just Mohanlal vs Mohanlal at the Kerala box-office, now!