The actress turned politician Kushboo is known for her bold and controversial statements and tweets. Her post on her social media handle on Thursday mocking the ruling BJP created quite a storm.  Commenting “how BJP ruled state assemblies are expected to look like in a few days from now”, she posted a picture of revered naga sadhus tagging the party president Amit Shah, which went viral instantly.  The post invited the wrath of many who openly slammed her, remarking, sometimes quite vulgarly,  on her film career and how she acted glamorously for money etc.

She was pounced upon for dragging the Hindu faith and spiritualism while making a political comment.  When we contacted her, Kushboo refused to talk further about it saying that ‘it was just my post and it ends with that’.  There were about 600 likes and 250 retweets within hours of her post, but it also received flak in equal measure. Many BJP politicians, party supporters and those who follow Hinduism were extremely angry with the actress for getting so starkly political as to use one state government’s special treatment of Hindu seers into a national issue while slamming the ruling party.

The saner ones saw a clear north-south divide in this, remarking that Kushboo showed little understanding of how the naga sadhus are viewed in the northern parts of the country where they are considered to be closest to divinity among those walking the earth. Her naivety in choosing the sadhus for taking down the BJP in a political argument was remarked upon extensively. What was she thinking when she chose the sadhus to illustrate her anger at BJP is what many are asking. 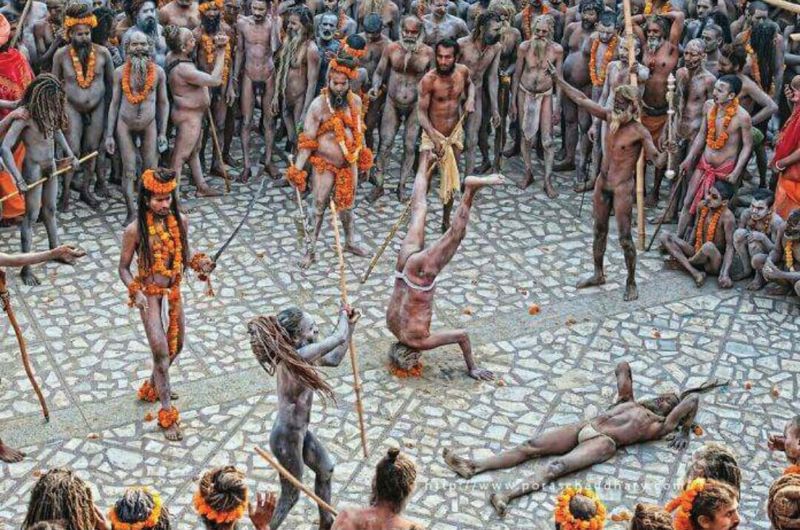 Replying to her tweet, former BJP MP and journalist Tarun Vijay said, “You are not just trying to mock at your pol rivals, you r insulting, mocking & contemptuously looking at your ancestors’ traditions, beliefs & devotion to spiritualism. Your illiteracy exposes those who hate everything connected with Hindus. No different from Islamic invaders.” Another among the twitterati, Rangarajanji, dragged the argument to mention her religion too, saying, “Tarun ji, obviously she may not have knowledge of Hindu and Hinduism as she was born in another religion. She was Nakhat Khan now Kushboo. Further she belongs to Congress known for appeasement. Also Congi known for bashing Hinduism.” He also posted a picture of Osama bin Laden dancing along his militant group and wrote, “And this is how Congi n their ruled states will b like after some days.” The battle continued making it a full-fledged Congress-BJP war on Twitter.

Rosy tweeted comparing the present congress ruled Karnataka with a picture of Siddaramaiah carrying a lemon. “This is how #Cong ruled State #Karnataka already looks like under Siddaramaiah- Carrying a LEMON wherever he goes!” (see pic) “Why do you bring aghoris in your political problem” asked Tamizh Pesum Indian. “Would this "atheist" mock Islamic or Christian religion like this? I dare you to show one tweet. Kushboo or badbu?,” commented Sankrant Sanu. “This is how Congress ruled state assemblies looked like” said Smoking Skills, posting a picture of militants sitting in a group.  The arguments are expected to go on but what the actress has done is to invite scorn after having spoken out so boldly on her atheism in a TV channel saying how she had lost her faith – and stopped her visits to mosques, temples and churches – after seeing so many children roasted in the Kumbakonam school fire.