Manju Bhargavi, the illustrious Kuchipudi dancer, is very familiar to us as ‘Tulasi’ from the landmark movie Sankarabharanam. A disciple of Kuchipudi guru Vempati Chinna Satyam, she began training at the age of nine at the Kuchipudi Art Academy, Chennai. She always loved the dance form and had her first performance at the age of 13. Currently, she’s in Thiruvananthapuram for conducting a workshop on dance at the Soorya Festival, which will conclude on Wednesday.

“This is my first time in Soorya Festival. The young dancers here are good. I have conducted many workshops and classes in Kerala and always found that the students here are so enthusiastic to learn. I’ve never heard them saying they are tired. Before starting any session, I make it a point to say to the students that while dancing, they should forget they have a body,” says Manju.

She had a great run in the movie industry. Apart from Sankarabharanam, she appeared in a cameo classical dance sequence with Kamal Haasan in Saagara Sangamam, which became quite famous. Though she had hits in the Telugu industry, she chose not to be active in the movie industry. “It was never a break. I was never interested in movies. Never ever! It was my mother who pushed me into movies. I was choosy after Sankarabharanam and delivered some hits in Telugu. However, my concentration was only on dance and performances.” 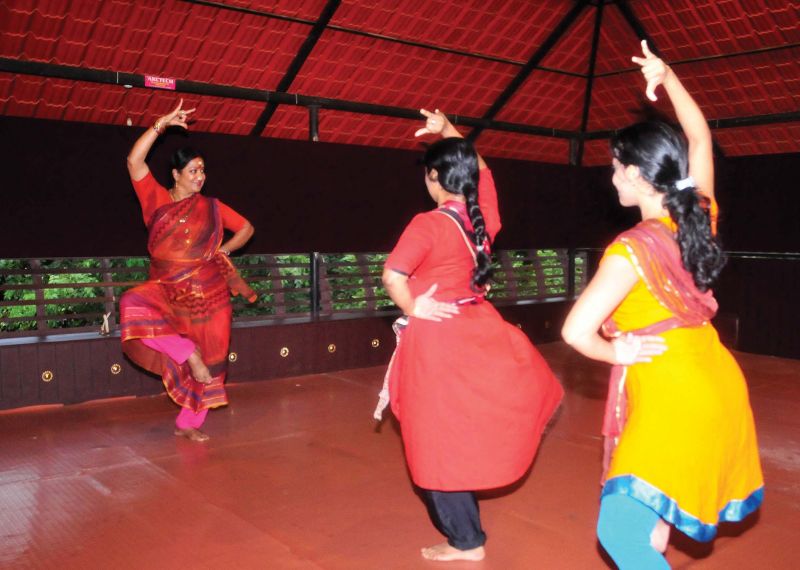 Manju Bhargavi at her workshop organised as part of Soorya Festival

Sankarabharanam is a milestone in her life and she considers portraying the role of Tulasi as a great achievement. In fact, she feels very proud when people still recognise her as Tulasi. “I’m very blessed to be recognised so. It’s been 38 years since the movie got released and still the youth is so enamoured by the movie. The movie depicts a pure guru-shisya relationship, but many may not understand that. It’s quite surprising to see that even my sister’s two-year-old and seven-year-old grandchildren love to see the movie. It’s an evergreen movie for all ages,” she adds.

“A few years back I went as a judge in Jain College, Bengaluru. I was wondering what the youth crowd know about the movie. But I was quite enthralled when a 20-year-old student gifted me a painting of the interval shot of the movie. It’s the greatest recognition I have got. When people ask me why I wasn’t honoured with many awards, I say the movie is beyond all awards.”

Today’s youth see dance as a medium to enter movies. In Kerala, this has been the trend for long and many debuted in movies after exhibiting their talents in youth festivals. She feels mastering a dance form can really help in strengthening one’s acting skills. “It’s good actually. Learning a dance form helps you in mastering your body language. The postures become right and you will be able to carry yourself better. A dancer can easily understand the expressions and the emotions the character demands. The movements become more graceful during the dance sequences too. 30-40 years back, movies were taboo for a lady. Time has changed; a woman’s personality has taken a U-turn. Attires, attitude, everything has changed. It’s surprising to see how a woman’s acting career is changing nowadays in India. It’s beyond imagination.”

She’s of the opinion that students should take dance very seriously and it shouldn’t be a medium for fame alone. She says every student should prepare well, and take ample practice before performing on stage. “In regular classes, the teacher should focus on the student’s body movements, expressions etc and correct them to make them perfect for arangettam. The training should be given in a way that they should sustain on the stage for two hours. Solo performance should only be done when the student is completely ready for performance.”

Manju runs a dance school, Natya Vedam, in Bengaluru since 1982. Many of her students have become independent performers and teachers now. In a batch she takes only 10 students. “I’m the only one teaching there. Only those who are really interested in dance will be part of my class.”

She is also planning to begin a Kuchipudi research centre soon. “It’s an attempt to make people know what Kuchipudi really is. It has to be known from the basics. These days all art forms are getting adulterated. Whatever I’ve learned from my teachers, it should be passed to the coming generation.”

“When you learn dance, surrender yourself fully to it. If you can’t give your 100 per cent, please don’t pursue. The teachers have to teach the dance forms in the proper way. Now there are even online courses to learn dance. If even in real you can’t teach properly, how can an online course make you perfect? Pursue art forms with dedication and sincerity,” she concludes.