Only a handful of movies have been capable of stirring the psyche of the audience in the recent past the way Dileesh Pothan’s movies have. They made the average Malayali laugh, cry, think and fall back in love with what they have always enjoyed about Malayalam cinema — the simplicity.  After the mega success of Maheshinte Prathikaram, Dileesh’s second outing Thondimuthalum Driksakshiyum has raked in a kind of response even the director did not dream of. In an era where everyone has become a movie critic and reviewer, Dileesh can finally heave a sigh of relief for nobody could find a speck of dirt to throw at the director this time either.

Dileesh says, “There are two kinds of responses —the one we think we might get and the one we wish we get. What has happened in this case is neither. The response is much beyond what I had even wished for. I am very happy.”Audience have tagged Thondimuthalum Driksakshiyum as a true blue Malayalam cinema with people saying these are the kind of movies they have been waiting for from the directors. For many it is the simplicity of characters and the plot that has elicited this feeling and for others it is the director’s attention to detail. Why are all your characters so grounded and so much like the rest of us? 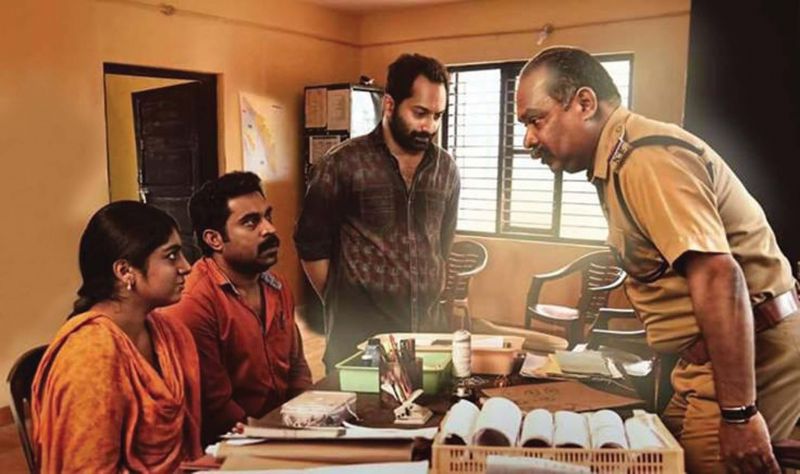 Dileesh and team spent a lot of time in police stations as part of their research.

“The characters in both my movies are the kind of people we all know or have come across at some point, be it the ones developed by Syam (Pushkaran) for Maheshinte Prathikaram and the characters developed by Sajeev (Pazoor) for Thondimuthalum… or the ones added on by Syam. The writers have played a major part in it.  What we have tried to portray is the character’s truest form as understood by us when the writers describe them,” he explains. A good portion of the film Thondimuthalum Drikshakshiyum unfolds inside a police station. The plot looks like an event lifted from the everyday lives of our law enforcers. Shedding light on the research that went into the making of the film, Dileesh says, “We have spent a lot of time in police stations as part of our research. More than that, I spoke to a lot of people and listened to their experiences inside police stations. Random conversations with people and police officers regarding such situations helped a lot.”

The locations of Dileesh’s movies are almost alien to the new clan of city dwellers in Kerala. The nostalgia-evoking, picturesque locales have a life of their own in both movies.  Speaking of how he zeroes in on such locations, he says,“People like Sreeja and Prasad can only live in a place like Vaikom. In other words, characters like Sreeja and Prasad from Vaikom are the ones I could relate to. I also believe that it is interesting when the characters are placed in a town like Vaikom, so I did what I felt and did not think too much about it.”

His response to the term ‘Pothettan’s Brilliance’ is this. “Yes, I have noticed the term going around. The truth is I have not thought too much about any of this. When I heard the stories of both my movies, I liked them. These are the kind of stories that I enjoy. I mulled over the story and the plot in my mind for a long time and I have tried to communicate what I felt in the best possible way to the audience. This is what I have always tried to do and will follow for my next project as well. Such responses from the audience only gives me more energy to keep trying. Clearly the encouragement I received after Mahesh...helped in the making of Thondimuthalum...,” he says.