Fun all the way!

A still from Mera Naam Shaji

Mimicry has contributed some fine artistes to Malayalam cinema. Some of them went on to become skilled actors while some showcased their talents in other fields like direction and music. If there are artistes who belong to all these categories, Nadirshah has a prominent place among them. He rose to fame through the famous mimicry troupe Kalabhavan and later played significant roles in movies like Manathe Kottaram, Aalancheri Thamprakkal, Dilliwala Rajakumaran etc.

Nadirshah became a household name after the release of the comedy cassette Dhe Maveli Kombathu. The volumes of the cassette used to come out in the Onam season and it had a tremendous fan following. Meanwhile, he also proved his mettle as a singer, composer and lyricist. In 2015, he took a big leap by directing the blockbuster movie Amar Akbar Anthony. This was followed by another super hit Kattappanayile Hrithik Roshan in 2016. The successes established him as one of the trustworthy directors in Malayalam. After a hiatus of two years, he’s back with this new movie Mera Naam Shaji, which is all set to hit the screens on Friday.

The movie stars Biju Menon, Asif Ali and Baiju Santhosh in the lead roles. “It’s about three Shaji’s hailing from Kozhikode, Kochi and Thiruvananthapuram. Shaji Usman from Kozhikode is played by Biju Menon, Asif Ali comes as Shaji George from Kochi and Baiju Santhosh is Shaji Sukumaran from Thiruvananthapuram,” says Nadirshah. From the teaser and stills, his new movie promises to be a full-length entertainer. “The three Shaji’s meet in Kochi coincidentally. From there the movie has a lot of humour, suspense and thriller elements.” The story is by Dileep Ponnan and Shaani Khader and is scripted by Dileep. The cast also includes Sreenivasan, Nikhila Vimal, Ganesh Kumar, Dharmajan, Mythili etc.

He says that Asif Ali and Biju Menon were on their mind for the respective characters during the scripting time itself.  All he wanted was a different face for portraying the Thiruvananthapuram Shaji. “A lot of faces came to our mind when we think of the Thiruvananthapuram dialect. But we wanted someone different. That’s how Baiju was selected. And Baiju is someone who genuinely and effortlessly handles the Thiruvananthapu ram dialect.” Working with these artistes was a joyous affair, says Nadirshah. “I share good friendship with all the three actors. I know Baiju chettan from the time I was doing mimicry. I also knew Biju Menon before coming to movies. Later, Asif became a close friend, too. The friendship and chemistry with them has really helped while making the movie. It can be seen on screen.” 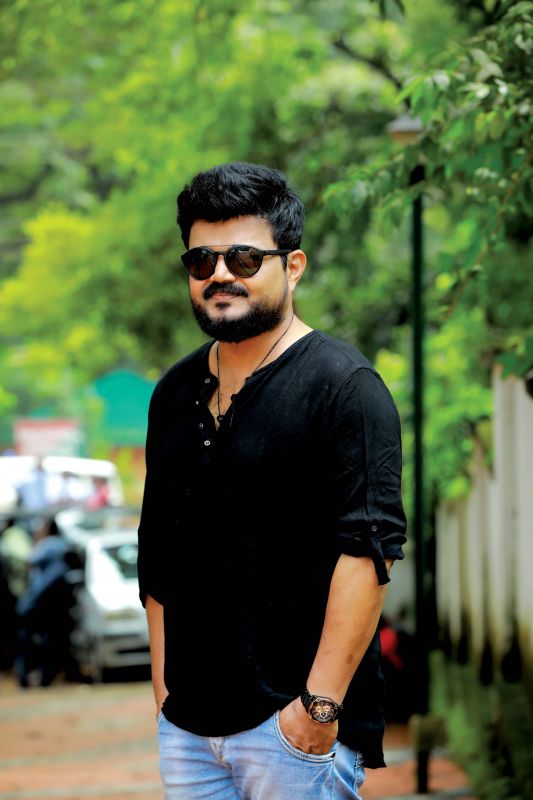 He affirms that he’s very lucky to have directed Sreenivasan. This is the first time he’s collaborating with Sreenivasan. “I consider this opportunity as my fortune. To say ‘action’ and ‘cut’ in front of Sreeni chettan is a memory I’ll always cherish. The movies he scripted, directed and acted in are some of my favourites. Those were the movies I watched when I was chasing film dreams. To work with him is a blessing.”

He asserts that the experience of doing Dhe Maveli Kombathu and other skits has really helped him in becoming a director. “That’s my only prior experience in direction. Initially, we did an hour-long comedy skit with audio alone, but it gave the impact of a movie. Then it became a two-hour-long visual programme. That’s where I learnt how to handle humour."

Any plans to direct own script? “I’m not particular about that. It’s the content that matters. If a good idea comes to my mind, then I’ll think of scripting.”

A lot of artistes with mimicry background have turned directors now. “They are very talented and have good direction sense. All are trying their best. My wish is to see all their movies becoming great hits.” Discussions on his next movie are already on. It will have his best friend Dileep as the lead. “We are in talks about the movie. It will also be a humour-based one as people expect such movies from me. They come to enjoy my movie. My movies will have all elements for an entertainer. As a director, I should meet their expectations.”

Nadirshah is also a part of Dileep-starrer Shubharathri, where he plays an important character. He affirms that Mera Naam Shaji will be a complete entertainer. “It will be a fun-filled experience,” he wraps up.