Kochi: The Central Board of Film Certification has refused to issue certificate to Malayalam movie Ka BodyScapes stating that the movie 'glorifies' gay and homosexual relationship.

"Ka Bodyscapes" is about three young people in Calicut Haris, a gay painter; Vishnu, a rural kabaddi player, and their friend Sia and their struggle to find space and happiness in a conservative Indian city. It stars Adhithi, Tinto Arayani and Arundhathi.

The order refusing certificate, issued by A. Prathibha, regional officer of the Central Board of Film Certification, Thiruvananthapuram, was sent to Jayan Cherian, the director of the movie.

“It’s official, Mr. Pahlaj Nihalani (chairman of the CBFC) put the final nail in my coffin!” Cherian said in a Facebook post.

"I haven’t decided what to do. Let me talk to my lawyers and take a decision," Jayan said.

"The second revising committee unanimously recommended 'Refusal' of certificate of the film. They felt that the film is glorifying the subject of gay and homosexual relationship, nudity accentuating vital parts of male body (in paintings) in closed shots in the whole movie. The film is explicit of scene offending human sensibilities depicting vulgarity and obscenity through the movie. The religion of Hindu is portrayed in a derogatory manner especially Lord Hanuman (shown in poor light as gay) which may cause law and order problem in society. The film contains posters depicting homosexuality throughout the movie and derogatory remarks against women. The film has references to Hindu organisations indirectly which is unwarranted." the order said.

Here is the letter that has been issued by the Central Board of Film Certification: 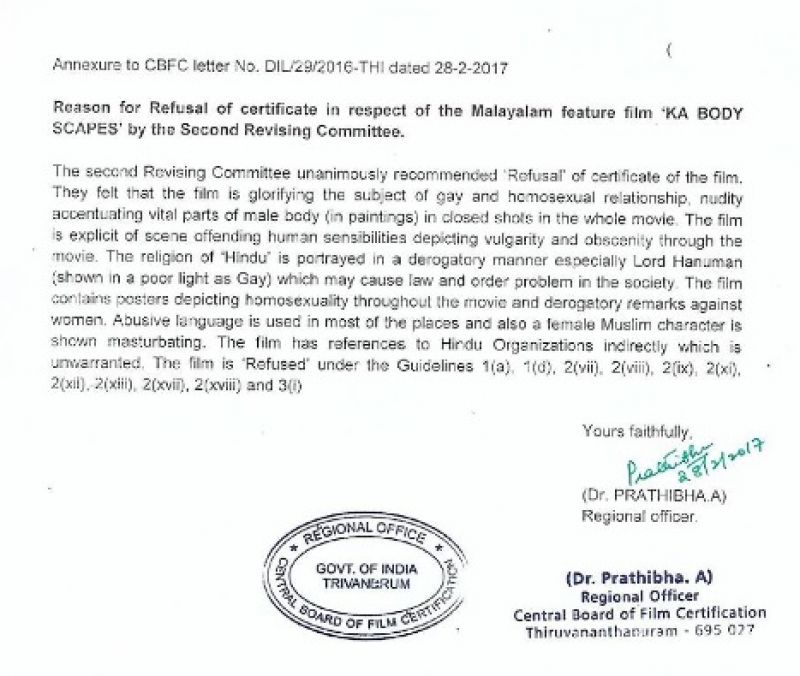 Last month, Prakash Jha's upcoming production "Lipstick Under My Burkha" was denied certification by the CBFC for being "lady oriented" and containing "abusive words".