In a recent interview, heartthrob Vijay Deverakonda heaped praise on his Malayali co-star Shruti Ramachandran as someone very talented and beautiful. Shruti was part of Vijay’s recent Telugu release Dear Comrade and he was only echoing what other industries have acknowledged long back – the reason why a lot of Malayali actors merit top billing in Kollywood and other industries. There is no arguing about the talented-and-beautiful part as far as Shruti is concerned. She has been part of Malayalam films like Pretham, Sunday Holiday, Chanakya Thanthram, etc. in which she appeared in noticeable roles. In her debut Telugu movie Dear Comrade, Shruti plays the prominent role of a dancer named Jaya who is the lead Rashmika Mandanna’s sister.

It is safe to say that Shruti landed her role in Dear Comrade thanks to a song. The director of the movie Bharat Kamma chanced upon her in the song Oru nokku kaanuvan from Sunday Holiday and decided to cast her as the shy and timid Jaya. “We had a couple of meetings and I finally got cast!” she says. Shruti admits to having being nervous about the outcome of Dear Comrade. “Being excited and nervous about the result of any film is the part and parcel of an actor’s life. Since this was altogether in another language, the initial acceptance was important.” She stresses on the intense involvement of every actor who was part of the film. 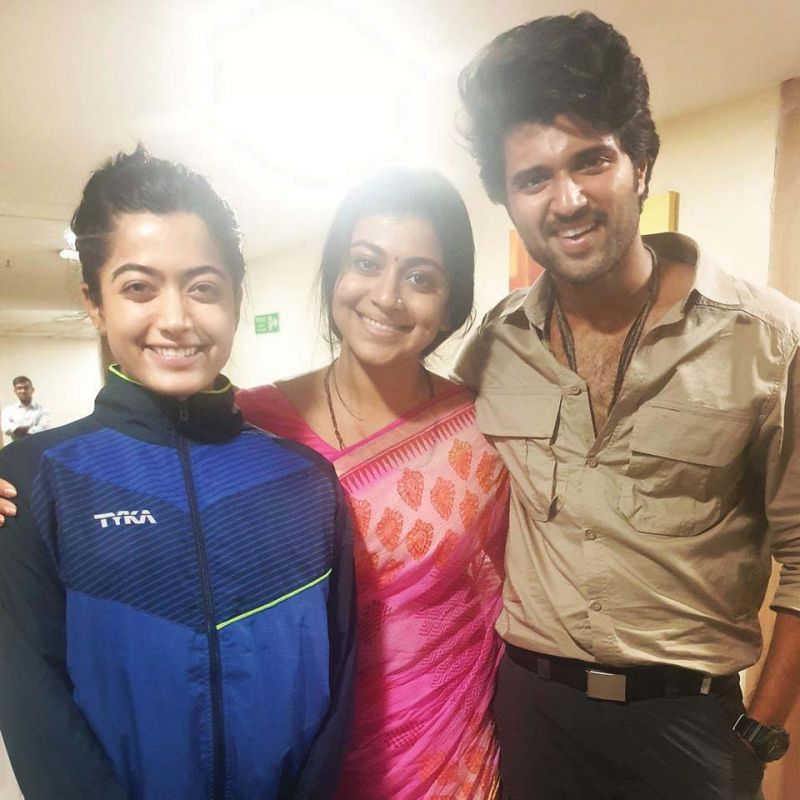 Rashmika, Shruti and Vijay on the sets of Dear Comrade

Before moving on to her working experience with Vijay and Rashmika, Shruti has this to say. “I have been incredibly lucky to have worked with some great actors and this was no different. The only inhibition I had was about the language.”

She made major efforts to learn the language and some of those efforts translated to funny anecdotes, which she recounts with a smile in her voice. “My very first scene was a comic one and that is when I realised how important it is to know the language. In a funny scene there is a lot of impromptu that happens. When the actor in front of you reels of improvised Telugu dialogues, you just do not know how to respond. Most of the people on the sets thought I knew Telugu. So, here I was in a huge scene with Vijay, Rashmika, Tulasi garu and others where I had to say ‘what happened’ in Telugu and I kept saying ‘enayitu’ in, believe it or not, Kannada. I studied architecture in Mysore and know a bare minimum of Kannada. In that scene, I surprised even myself because Kannada came unbidden to my mouth,” she explains.

Soon, the senior actor Tulasi pulled Shruti aside and whispered that this was a Telugu film and told her the appropriate Telugu word. Shruti reassured her that in the next shot, she would take care of it and promptly said ‘enayitu’ again. This time it was the AD who pulled her aside and very respectfully reminded her that it was not a Kannada project, but a Telugu one.

The laugh comes unbidden. “This is just one of the many language fiascos that occurred,” she lets on, adding that whenever her co-stars were opposite her, they were incredibly supportive as were the rest of the cast and crew. The professional experience has her eager to work in more Telugu projects if they find their way to her. “This is the biggest movie I have worked in. Be it the production value, fan following or technical aspects, the magnitude was huge!”

Tinsel town is an industry where luck and talent play equally important roles for any actor. Shruti, too, believes in luck and hardwork. “You do not know what clicks when! I came to that realisation during my third project Sunday Holiday,” mentioning the climax of the film where she had to turn back and look at the lead Asif Ali with a mix of jealousy, loathing and anger. She says, “This was the first shot we took and I had no idea how it would turn out, but when I saw it on screen, I was amazed at the audience’s reaction and wondered how such a small action could have such a huge impact! I was lucky there.” She highlights talent. “With the kind of work that is coming out today, if you don’t have talent, it will not be easy.”

Shruti asserts that it is a beautiful time to be in Mollywood which is churning out such diverse content. There is a shift from the long-standing traditional model of a hero and a heroine to ensemble characters with a lot of depth. “It is more of team work and a set of dedicated number of actors,” she feels.

The actor was part of a Tamil web series called Dollhouse Diaries, in which she played Mythili. With the OTT platform garnering a huge fan base, it is only natural that actors migrate there. Shruti opines, “It is not like cinema will go out of fashion, but web series give the flexibility of being viewed at any time from either a phone or a TV saving on time. Also, there is some great content out there with the biggest advantage being that one can go experimental since people are still finding their way. Also, a lot of subjects that do not work in cinema work on these platforms.”

The actor is excited about her upcoming project Anweshanam directed by Prasobh Vijayan with Jayasurya in the lead. She has a personal connection with the film. “The script is written by my husband Francis and it is his maiden attempt. I am thrilled to be acting in his project,” she gushes.

Short take on a grave issue