Actor Vishal celebrated his birthday yesterday in the Ilayathalapathy Vijay way! After taking part in charitable activities including a blood donation camp, annadhanam at various temples, hosting lunches in orphanages and senior citizen homes along with actress Varalaxmi, Vishal gifted gold rings for the 20 kids who were born on the 29th in Kasturba Gandhi hospital in the city. He also named a child Vishal Devi, the latter half of the name being his mother’s name.

On the career front, it was a double dhamaka for the actor as he has signed Sandakozhi 2 with Lingusamy. When queried if he would enter politics, pat he said, “Politics is not in my agenda.” However, when we pointed out that his strategic social activities seem to move in that direction, he asked us back, “Do you want me to come or not?” When we said ‘yes’, he was in all smiles and replied in a lighter vein — ‘Then you take as I may come to politics!” 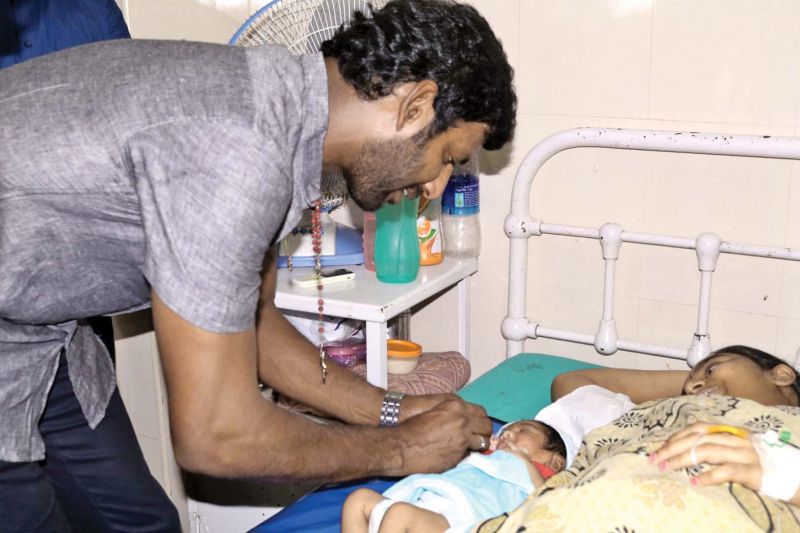 Vishal gifting a gold ring to a new born child.

Recently, there was an allegation by Varaahi, reportedly a member of the Vishal association, that as secretary of Nadigar Sangam, Vishal had swindled money to the tune of Rs 3 crore while conducting Star Cricket for the Sangam’s fund raising event. He also alleged that the Pandavar Ani under Vishal’s leadership, which came to power in the SIAA last year, had not fulfilled any of the promises they made in their election manifesto.

At a time when the association is completing its one-year tenureship, these charges on Vishal have come as a surprise to many. However, speaking to DC in an exclusive, the actor refuted the charges against him. “Let Varaahi prove his allegations and then talk. We assumed charge at Nadigar Sangam exactly a year back. An account is maintained even when  items like pins are purchased for the sangam’s office. Our treasurer Karthi, who is from the virtuous family of Sivakumar’s, will not allow us to take even a pen from the office. Under these circumstances, there is no question of any malpractice, and the claims are baseless. I am ready to face the consequences if Varaahi shows relevant evidence.” Meanwhile, Nasser, president of Nadigar Sangam has approached the police station and lodged a complaint against Varaahi for creating a ruckus before the association a few days back, and has sought police protection for the association and its employees, including two female workers who experiencing mental agony.